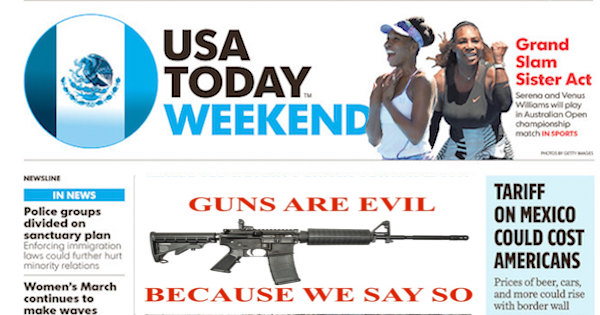 Mainstream media wonders why no one believes them anymore.  Well, they shot themselves in the proverbial foot by constantly and relentlessly skewing stories that, if reported honestly, don’t fit their narrative but still them pound that square peg into their round hole of an agenda.

I reference, in the title of this article, the hatchet job that the editors of USA Today did of completely distorted a real tale of self-defense by making it seem like the gun owner was the bad guy.

Their title for reporting a story in which a Texas resident shot a robber at a jewelry store in a mall in San Antonio was this:

“Shopper who shot suspect did not have carry permit.”

Now, from nothing more than reading that headline a person is led to believe that the gun owner was somehow committing a crime by having a gun in the first place.  Regardless of the fact that he used his firearm in defense of the shoppers and workers in the store.

See, USA Today and other liberal rags and media don’t want you to associate guns with lawful uses of defense so they twist and distort the facts…or outright lie in order to make the public at large associate anything to do with firearms as bad.

But here is where things get even MORE interesting.  The shopper actually DID have a carry permit.  So right there USA Today is also guilty, on top of being an anti-gun water carrier for the likes of Michael Bloomberg, being bad at actually reporting the facts they are trying to distort.

But when have media outlets like them let their shoddy reporting slow the advance of their agenda though?  I ask because they changed the title of their article yet STILL made it seem as if the law-abiding gun owner was at fault.

Texas mall: Shopper who shot suspect not allowed to carry

Why technically more accurate it is still misleading and gives you the sense that the good Samaritan who stopped a violent robbery was somehow breaking the law.  He was not.

It happens that the mall in San Antonio is a so-called “gun free zone.”  I have written numerous times debunking this ridiculous claim that a sign is going to stop a person with ill intent from bringing a gun into that zone.

The worthless mall sign in Texas doesn’t do anything to keep people safe but does have the weight of law behind it so carrying in the mall is misdemeanor…but only if you refuse to leave after they ask you to.

To wit according to Texas Penal Code 30.07

(d) An offense under this section is a Class C misdemeanor punishable by a fine not to exceed $200, except that the offense is a Class A misdemeanor if it is shown on the trial of the offense that, after entering the property, the license holder was personally given the notice by oral communication described by Subsection (b) and subsequently failed to depart.

From the USA Today story:

The shopper at a Texas mall who had a concealed carry license and shot a robbery suspect should not have been carrying a gun inside the mall, according to the mall’s policy.

On Sunday, a man was shot and killed while trying to stop a jewelry store robber at Rolling Oaks Mall in San Antonio. Another man, with a concealed permit, shot one of the suspected robbers who police said stole from a Kay Jeweler’s store. Four others were injured.

I contend that the 2nd paragraph of this story refutes the emboldened part of the first paragraph.

The good Samaritan most definitely should have been carrying his gun that day because he ended up needing it.

That is the information that the gun grabbing progressives never want you to know. The information that their media accomplices distort.  They never want the public to think that guns are EVER used in self-defense or to protect others.  And when firearms are used to protect they try their hardest to either discredit or ignore the person doing the protecting or the incident as a whole.

The mall’s general manager doesn’t help; spewing the same garbage about people feeling safe instead of actually being safe.  The GM Dustin Christensen had this dribble to add to the USA Today story in which the paper basically gave all credence and importance to:

“Although we respect the laws of the state and individual rights, we do, however, maintain a separate code of conduct that we visibly post at our entrances that includes the prohibition of any weapons on the property. Our top priority continues to be the safety of our shoppers as we strive to provide the best possible shopping experience for all.”

How exactly did that prohibition help stop the jewelry store robbery?

It didn’t.  It took a gun owner who ignored it and would rather be asked to leave if discovered rather than be unarmed when criminals threatened his life to put an end to the actual threat.

But to hear USA Today put it, somehow instead of the dead 42-year-old criminal who was trying to rob the store and got shot by the good Samaritan, it was the guy who stopped the crime who somehow gets cast in a poor light via the title of their article.

Once again Christensen runs his idiot mouth and spews forth more dribble and I point out to what he omitted as well as what he said:

“Our top priority is the safety of our shoppers, retailers and employees. We work closely with and applaud the San Antonio Police Department for their efforts to keep our community safe. Our collaboration with law enforcement, which is part of our comprehensive security efforts, is crucial as we strive to provide the best possible shopping experience.”

The first part that is in bold is simply NOT true.  Christensen doesn’t give a damn about the safety of the shoppers, retailers and employees.  All he cares about is insurance claims, sucking on the teat of the powers that be to ensure he still has his job.

He then applauds the San Antonio Police Department, and i’m not knocking the SAPD, but where were they exactly when this crime was going down?  Nowhere close that’s where.  Then he spews some more platitudes.  What Christensen doesn’t say, or acknowledge in any way is that a good guy with a gun stopped 2 bad guys with guns from robbing a jewelry store and killing a bunch of people.

But even if he had I doubt USA Today would publish it…it goes against their agenda and for progressive rags like them, the agenda is more important than the truth.