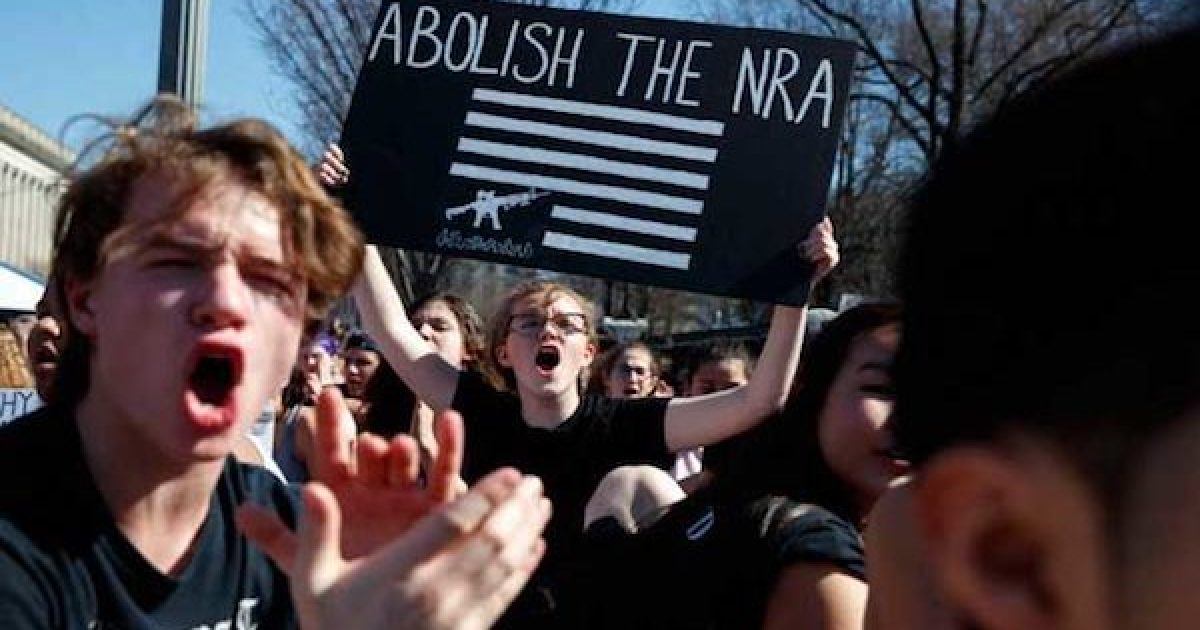 I often criticize the latest crop of high school and college kids as the everyone gets a trophy, no one loses, everything is done for them, hide in safe spaces generation who have never learned how to think for itself because they have been spoon-fed since birth. But today I had the sheer pleasure of reading a piece from a junior in high school who is proof that there is hope for the future of America.  Cole Sherman is tired of being manipulated and used as a pawn by leftists and media to help them take away gun rights and other freedoms our founding fathers said were “endowed by our creator”

Most think my generation is a bunch of entitled losers. The image is that we play video games all day and eat Tide Pods for fun.

I would start by saying that I am not a Tide-pod eating, emotionally-driven child like the gray-haired generations before me would like to think, and I’m not alone. Just because the media is showing many students happy to “Walkout” don’t for a second think it represents all of us.

Unlike what some may think, I’m not going to “walkout” like liberals would want. I am completely fed up with how the Democrat Party and those in favor of stripping guns away from Americans by using the latest tragedy. It’s becoming painfully obvious that the left is using the students of this country to push their own political agenda.

Unfortunately, this is not a new strategy for the liberals to use the latest horror to their advantage. The same kind of push for mass gun control occurred following the Sandy Hook shooting and Aurora shooting. Immediately, once word broke of these violent murders, the media pounced on its opportunity to preach their message of gun control in spite of the fact that it will do nothing to curtail future attacks.

For the left, the gun is always the culprit. It doesn’t matter who pulls the trigger. Before the blood dries, the anti-gun liberals are pointing their deceptive fingers at the gun instead of the user.

Social media is suddenly full of signs, posters, hashtags, and rallies being drawn and formed saying things like “F*ck the NRA” or “Gun Control Protests won’t go away this time”. Sure, that is all fine and good. In America, everyone is allowed to express their free human rights guaranteed by the First Amendment, no matter who disagrees with it.

Something is different with this latest round of anti-gun rhetoric. This “walkout movement” is different from all the other instances because this time the power players behind it have used students my age as the face of change. We are suddenly useful to the old people of America. Many of those my age have no idea they are being played as fools. They are literally tools for a movement they know almost nothing about.

Fortunately, this movement has not reached my school and I don’t think it ever will. Despite being in the most liberal county in Iowa, the majority of students in my school think this walkout movement is a load of crap. I have talked to many of the students who walked out of their schools and most of them said that they just wanted to get out of class.

The media uses clips of students marching and protesting to push their propaganda. They show the number of students who show up to these protests as a testament to how the young generation, my generation, is instantly the smartest and brightest group of kids ever, simply because they are suddenly for gun control.

I’ve had it. I will not tolerate these false uplifts of praise when less than a month ago they said we were all stupid and simply lived to eat Tide-pods for fun. Older people were freaking out that my generation was going to destroy America until we suddenly did what they wanted. Our generation means nothing to gun control activists. We are a means to an end. They don’t care if we eat Tide-pods or Tostitos; all they care about is if we are able to be used for their own purposes.

As a student and a member of the youth of America, I hate being used as a piece in someone’s game. Our generation is being used as puppets to push gun control and restrictions on the rights that our forefathers handed down to us. Many students, in my school, are also refusing to be used as pawns. We are not going to let our generation be represented by the likes of “David Hogg”. There are many in my generation who believe in a great future for America and it’s time for us to stand up and fight for it.

To the liberals bent on gun control we are simply a tool to be used to achieve a goal. To the conservative, we were nothing but an embarrassment and proof that America is in decline.

To all American’s I would say to have hope. It is a tough time to be a conservative teenager. Society is stacked against us. However, I would submit that many students, unlike myself, keep their ideals silent in fear of ridicule and unfair treatment, but that doesn’t mean they aren’t there.

There are many of us desperately looking to believe that there is more available to the youth of America than the socialism being offered by the liberals.

I believe it’s time that we stop fearing what the media and the left will do or say to us. It’s time for us to stand up and speak with a loud voice…we will not give up our freedoms in the name of false security. The statement: Gun control will keep you safe, is a comforting lie perpetrated on the people of America for years. It’s time to let that die on the ash heap of bad ideas.

My generation wants to be free to live as we see fit as much as the “Baby Boomers” or Gen X’ers. It’s time to stand up against the manipulation of the generations before. We can and will make our own way and freedom is still our beacon. No matter the costs, those of my generation can no longer stay silent and let America slip into soft tyranny. I would like to inherit the same rights my father had…not fewer.

In the immortal words of the brilliant Martin Luther King Jr. “to ignore evil is to become an accomplice to it.”

This piece was originally seen at The Daily Surge, where Cole’s proud dad Steven is Senior Editor.