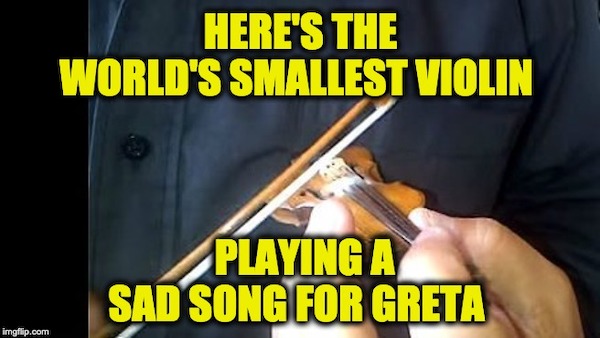 Because NOBODY Expects The Comfy Chair.  Greta Thunberg exposed

Climate alarmist, Greta Thunberg was on the receiving end of a snarky message from a train company following a viral tweet showing her sitting on the floor due to ‘overcrowding.’ Greta Thunberg exposed

Thunberg, never one to miss an opportunity to publicly whine and seek out sympathy for imagined tragedies, tweeted a photo of herself on the floor of the train, surrounded by luggage.

“Traveling on overcrowded trains through Germany,” the teenager lamented. “And I’m finally on my way home!”

Oh, poor Greta, she must need some support.

Thunberg, as we’re sure readers are aware, nobly refuses to travel by air, citing concerns that such travel is detrimental to the environment.

The railway company, Deutsche Bahn, did not take kindly to the perceived complaint, however.

Traveling on overcrowded trains through Germany. And I’m finally on my way home! pic.twitter.com/ssfLCPsR8o

While the company did express admiration for Thunberg supporting railway workers in the fight against global warming, they couldn’t help but add sarcasm, noting that the teen did not give them credit for helping her out of her predicament.

Mainly, they wanted the public to know that Greta was well taken care of – even being moved to First Class.

“Dear [Greta], thank you for supporting us railroad workers in the fight against climate change! We were pleased that you were on the ICE 74 with us on Saturday. And with 100 percent green electricity,” Deutsche Bahn wrote.

“It would have been even nicer if you had also reported how friendly and competent you were looked after by our team at your seat in first class.” 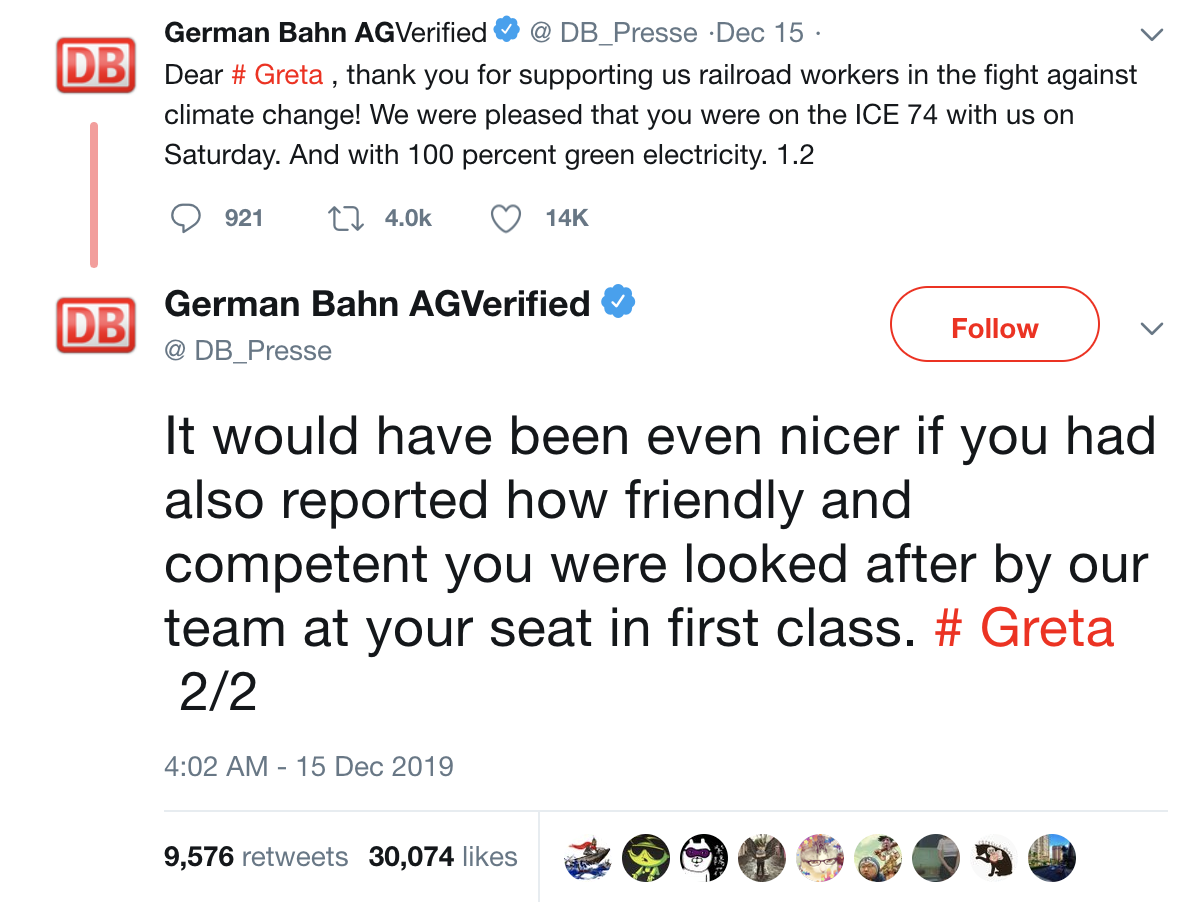 Zing! Double dose there, snarkily revealing that Greta didn’t take the opportunity to point out the good the company has done in combatting climate change but also noting she conveniently chose not to take a picture while being pampered in First Class.

Give the girl a break! First Class can be a horrible way to travel, legroom, good food, and drink, a desk to work or eat on, and…well..the most horrible thing of all… the comfy chair.

Thunberg has experienced some problematic sledding ever since delivering her viral “How dare you” speech at the UN, scolding adults for stealing her hopes and dreams.

Since then, she has been upstaged in a hilariously viral video of the President of the United States as he addressed reporters. President Trump strolled by while Thunberg looked on in disgust.

She also had the wind taken out of her sails when conservative teenager CJ Pearson challenged her to a climate debate moments after Greta was named Time Magazine’s Person of the Year for 2019.

.@GretaThunberg – teen to teen – let’s meet on the battlefield of ideas and debate the merits of your claim that climate change is the existential crisis you characterize it to be.

What do you say?

Now, it seems, even train companies are growing weary of the ‘woe is me’ shtick being peddled by the teenager, or the adults enabling her to act the part.