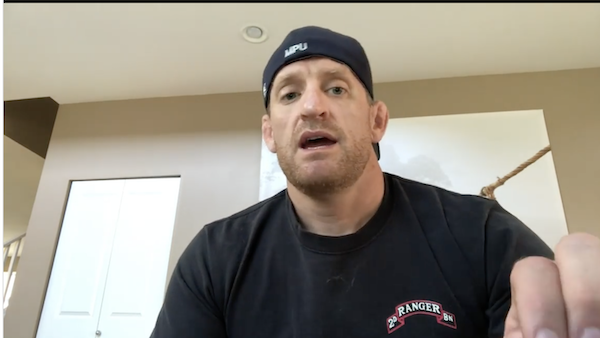 Greg Anderson, a cop and combat veteran, posted a video explaining his support for upholding his oath. He explained the importance of having the Constitution be the North Star that guides which directives a police officer will enforce, and why the excuse of ‘only followed orders’ is no excuse at all.

This video first caught fire on May 5th.

He cited some examples of police action against civilians across the country in this COVID lockdown that have no apparent basis in law, and he called on his fellow Law Enforcement Officers NOT to take any such illegitimate actions. He appealed to the Constitution, and he appealed to the need for healthy levels of trust and respect between the public and the police.

It was a message his superior officer supported and praised when there were a few thousand views at five am.

Here is the original video.

He raised concerns that such an erosion of that trust could create unnecessary conflict and increase the risk of physical danger in future interactions between police and the public they are sworn to protect.

That message his officer had praised was suddenly ‘problematic’ a short three hours later. Suddenly, they were insisting he take the video down.

What changed? It went nuclear on social media. Now brass was breathing down his neck.

Officer Anderson — who, in this very video, called on his fellow officers to do the right thing, even if your integrity causes you to pay a personal price, was told to take down the video. If he did so, they would let him get off with a letter of reprimand.

He refused. Now he’s on administrative leave and facing termination because his superiors don’t believe in the freedom of speech.

I’ve received tons of questions regarding my termination from the Port of Seattle Police. So I figured I should explain. I have been placed on administrative leave (still being paid) pending investigation. I was told by both the agency and my union that this will result in termination due to it being an insubordination charge for refusing to take down the video. I’m not sure what the timeline looks like. I walk un-intimidated into the fray. Thank you for all the support

Here’s the reason ‘why.’ His Chief told him, ‘if you openly defy your Governor, you can’t be a police officer in the state of Washington.’

Anderson reminds us that case law like Marberry vs. Madison (1803) expressly states that any law in conflict with the Constitution is Null And Void.

Ultimately, that would make such laws unenforceable by police, regardless of who it is making orders to the contrary.

Now he’s facing termination for ‘refusing a direct order’ and ‘insubordination’ because he was told to take down this video, and he did not.

In a world full of chumps, this guy’s a champ.

You know what to do, Lid Readers… let’s make him famous, and shine a light on the political hacks who think Obedience to Petty Potentates is more important in America than the Constitution that safeguards our rights.

One thing though “A lot of people have been calling the Port of Seattle 911 dispatch line to voice their displeasure for my situation. While I greatly appreciate people rallying behind me on this matter, I’m just imploring you to contact the Port in a different manner if you feel compelled to voice your displeasure.” Apparently, the 911 dispatch center is getting overwhelmed, and they need the line to handle emergencies. But the Port of Seattle main department phone number is  (206) 787-3490 (Be polite) Here is their Facebook page