They Believe Production Of Legal Marijuana Increases The Carbon Footprint 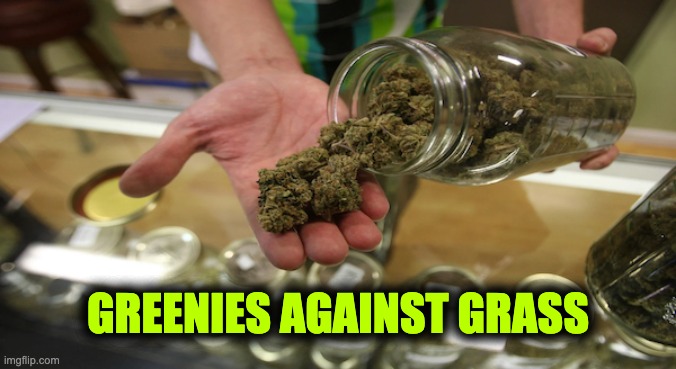 WHAT??? Are they stoned or something?  greenies against grass

First, it was their desire to destroy the American economy and redistribute income between countries, now the believers in the climate change hypothesis are trying to sell the county the idea that Maui Waui, indeed all versions of marijuana, is bad for the climate.

According to a story in Politico called “An inconvenient truth (about weed).”

Marijuana has never been more popular in the U.S. — and its carbon emissions have never posed a bigger threat to the climate.

America’s patchwork approach to legalizing weed has helped make cannabis cultivation one of the most energy-intensive crops in the nation. And as states increasingly embrace marijuana, a growing source of greenhouse gases is going essentially unnoticed by climate hawks on Capitol Hill.

Nationally, 80 percent of cannabis is cultivated indoors with sophisticated lighting and environmental controls designed to maximize the plant’s yield. It’s a setup that can consume up to 2,000 watts of electricity per square meter, 40 times what it takes for leafy greens like lettuce, when grown indoors.

But come on, it doesn’t have to grow in the sophisticated lighting. Four decades ago, when I lived in a college dorm, we would be able to load a doobie with product grown in a flower pot.

A 2020 study claimed that the growing Herb industry accounts for at least 1% of the total electricity consumption—and that percentage is increasing.

One recent model estimated that Massachusetts’ nascent cannabis industry represented 10 percent of the state’s industrial electricity consumption in 2020. Another study found that growing enough bud for a joint — a gram — consumes as much electricity as driving about 20 miles in a fuel-efficient car.

When the climate change hypothesis followers start attacking an industry for their carbon footprint, they never consider the loss of jobs resulting from their attacks. Their pot pugnacity is no different.

Despite the huge climate impact of the nation’s fastest-growing new industry—legal sales jumped 50 percent last year, topping $20 billion, while the industry added almost 80,000 jobs—Biden, most lawmakers and many environmental groups, even those supportive of cannabis legalization, have largely ignored the issue.

And that doesn’t even count the loss of jobs from the lower consumption of Cheetos, chips, and other munchies, or the secession of people ordering delivery from Domino’s pizza at 3am. Or the people who manufacture rolling papers, pipes, and/or bongs.

Green new deal creator, AOC wants to ensure that should smoking hemp is legalized on a federal level, the industry is not dominated by the corporate giants, “That is only most possible when you legalize cannabis in a way that small businesses are able to take a lion’s share of that market share.”

To be honest, I must admit that neither Acapulco Gold nor any other version of wacky weed has touched my lips since my college graduation over four decades ago. And whether one thinks Haze should be legal or not doesn’t matter because the greenies against grass complaints outlined in this Politico article demonstrate once again that the goal of the climate change hypothesis isn’t about “saving the Earth.” It’s about controlling industry and move the world’s economy away from the ideas of Adam Smith and toward those of Karl Marx.

For another take on this subject, read Politico: The next great climate threat? Ganja at Hot Air from my friend Ed Morrissey.