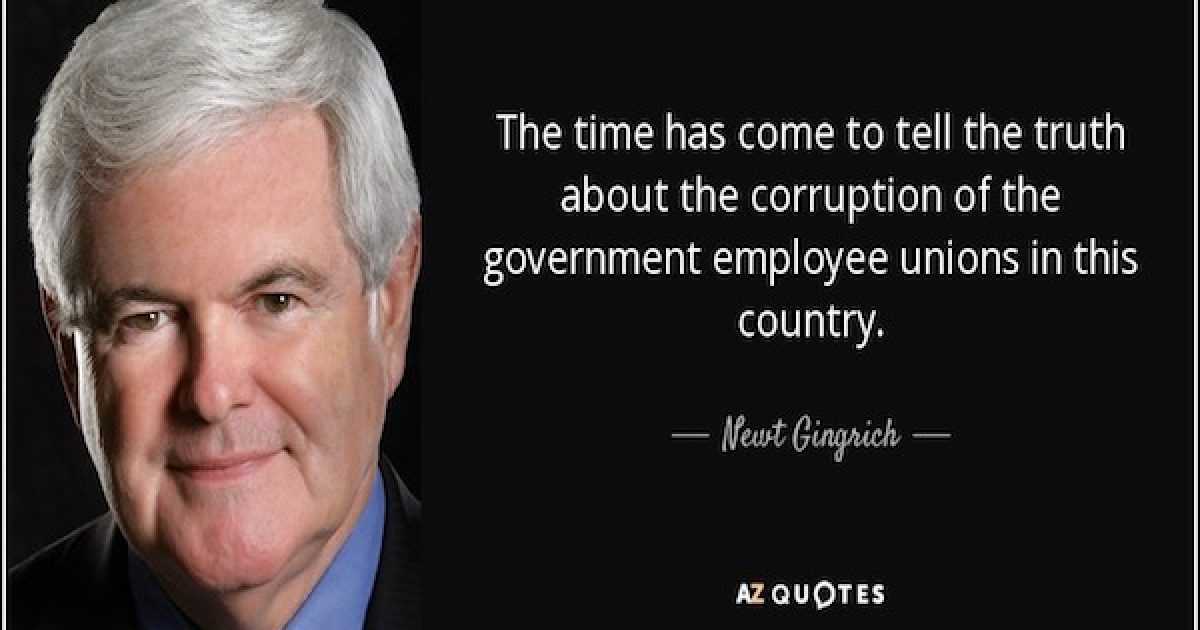 Some of the best “popcorn” moments in Washington have generally flown under the radar as not many have noticed the repeated body blows that President Donald Trump has delivered to the greedy,  government unions and this week he did it again.

I say “popcorn moment” because Trump’s repeated attacks on the unions makes you want to break out the popcorn to watch the Democrats get angrier and angrier as Trump undermines their source of union money income.

I guess there is just so much going on that the media hasn’t spent much time on the story, but Trump’s work to force the collapse of the greedy government unions has been epic and unprecedented. No other president has hurt the unions so badly.

The latest is the Trump administration’s effort to cancel the free office space that Barack Obama gave to the unions. You see, during the fetid Obama regime, government union officials were allowed to set up shop in government buildings without paying a red cent in rent.

So, what we had were thousands of union goons given free office space in buildings the U.S. taxpayers are funding. When Trump came to office, he apparently wondered why union officials were allowed to use tax-funded office space free of charge?

Well, it IS a good question, after all.

So, Trump issued an executive order to start tightening these rules up, essentially telling the unions to pay up or get out. The effort to kick these union toughs out on the street has begun with at least two federal agencies issuing orders for union officials to either pay rent or find other offices.

NTEU President Tony Reardon said last week the Social Security Administration’s Office of Hearing Operations informed the union that it plans to strip it of rent-free office space unilaterally, according to Government Executive.

Health and Human Services has also proposed via bargaining on a new contract that NTEU begin paying rent for office space on agency property.

Naturally, the unions are suing to try and vacate Trump’s order and to allow them to continue ripping off the U.S. taxpayers for millions of dollars in rent.

The National Treasury Employees Union is fit to be tied, naturally. These union thugs are calling Trump’s move “anti-employee” — even though no real employee is affected by the order to force union officials to pay rent.

“We do not believe that the agency can unilaterally implement these anti-employee provisions without bargaining, as required by the current statute governing labor relations in the federal government,” Reardon said. “We look forward to arguing our case in federal court at the end of this month to preserve the workforce rights for the men and women of OHO.”

The fight will include bargaining with Health and Human Services.

“The office space we are entitled to under our agreements is the result of collective bargaining, agreed to in the give and take of contract negotiations,” he added. “It isn’t ‘provided.’ NTEU bargains for office space to ensure that employees have a private area to discuss their workforce matters with an NTEU representative, and that personnel documents and other materials are safely stored and secure.”

That, of course, is only the latest move the Trump administration has taken to undermine government unions.

The administration quickly jumped to the anti-union side of the argument in the Supreme Court case called Janus v AFSCME. As Politico reported last year:

In a brief submitted in Janus v. American Federation of State, County, and Municipal Employees, the Office of Solicitor General sided with a child-support specialist for the state of Illinois who’s challenging AFSCME’s legal right to collect so-called “fair-share fees” from union nonmembers. Unions say such fees are necessary to cover collective bargaining costs for union nonmembers, whom they’re required by law to represent. But plaintiff Mark Janus is arguing that the mandatory fee violates his protected speech under the First Amendment.

With the completion of the latest Supreme Court session, we now know that the Trump administration was on the winning side of that argument as AFSCME lost its case to force employees to pay dues whether or not they support the union or want to be a member.

Per Breitbart News’ Ken Klukowski, the court ruled that the rules violate the First Amendment:

The U.S. Supreme Court ruled in a 5-4 decision on Wednesday that requiring government employees to donate part of their paycheck to public sector labor unions violates those employees’ constitutional rights under the First Amendment, overruling a 1977 case to the contrary and dealing a severe blow to the power of government unions.
The Supreme Court in its 1977 Abood case held, despite strong objections by conservatives, that the Constitution permitted compelled union dues. As the justices has looked more to the original meaning of the First Amendment’s Free Speech Clause in recent years, they have issued a number of 5-4 decisions increasingly at odds with Abood.

A state employee in Illinois objected to any part of his paycheck going to labor unions, which often support left-wing causes and politicians. Unions and groups affiliated with the Democrat Party argued that the requirement should be upheld because the unions’ negotiating activities secure higher wages and benefits for all state employees.

“We will not engage in this halfway originalism,” Alito responded.

In another case, back in May Trump rolled back unnecessary protections hat made it almost impossible to fire useless or even criminal government workers.

The executive orders Trump filed in May include:

The orders limit federal employees to spending no more than a quarter of their workday on “official time” — paid time to do union business, a benefit Congress approved for federal unions four decades ago. Administration officials said the change could save $100 million a year.

They require agencies to negotiate union contracts in less than a year. And they direct managers to move more aggressively to fire poor performers or employees involved in misconduct, limiting to one month a last-chance grace period for improvement that now can last up to 120 days. Agencies must also disclose details about an employee’s record to other federal offices considering hiring someone who has been fired or disciplined.

The changes also upend a long tradition of basing layoffs on seniority. Agencies can now take performance into consideration, as well.

The orders also require agencies to begin charging unions for space in federal buildings they now use for free.

White House officials said their goal is to make the federal workforce more efficient and responsive to the public and to improve morale for employees who play by the rules.

“These executive orders make it easier for agencies to remove poor-performing employees and ensure that taxpayer dollars are more efficiently used,” said Andrew Bremberg, the White House director of the Domestic Policy Council. The president himself said he wanted “to empower every Cabinet secretary with authority to reward good workers and to remove those that undermine the public trust or fail the American people.”

Trump has taken these efforts much, much farther than any other president. It has alarmed left-wingers such as the Brookings Institute. Brookings’ Darrell M. West recently complained about the president’s broadsides against government unions that is as pathetic as it is funny. But it does prove that Trump’s work against the unions is flying under the radar for many.

This is all good stuff. Public employee unions are antithetical to democracy and good government. Even Franklin Roosevelt, one of the worst socialists of our history, knew this.

Roosevelt was wholly against public employee unions and for a good reason:

All Government employees should realize that the process of collective bargaining, as usually understood, cannot be transplanted into the public service. It has its distinct and insurmountable limitations … The very nature and purposes of Government make it impossible for … officials … to bind the employer … The employer is the whole people, who speak by means of laws enacted by their representatives…

Particularly, I want to emphasize my conviction that militant tactics have no place in the functions of any organization of government employees. Upon employees in the federal service rests the obligation to serve the whole people … This obligation is paramount … A strike of public employees manifests nothing less than an intent … to prevent or obstruct … Government … Such action, looking toward the paralysis of Government is unthinkable and intolerable.

Government employee unions did not have collective bargaining rights until more modern times.

Collective bargaining for public employees only started in 1958 after New York Mayor Robert Wagner signed what came to be called “the Little Wagner Act” allowing city workers to unionize. In fact, collective bargaining itself was only legalized even in the private sector only in 1935 when Wagner’s own father, New York Senator Robert Wagner, sponsored the National Labor Relations Act, or the Wagner Act.

So, in truth government employees never had the power to destroy the relationship between voters and government until liberals gave it to them only a few decades ago.

It is long past time that this power is scaled back if not eliminated entirely and Trump is the first president to ever try it.