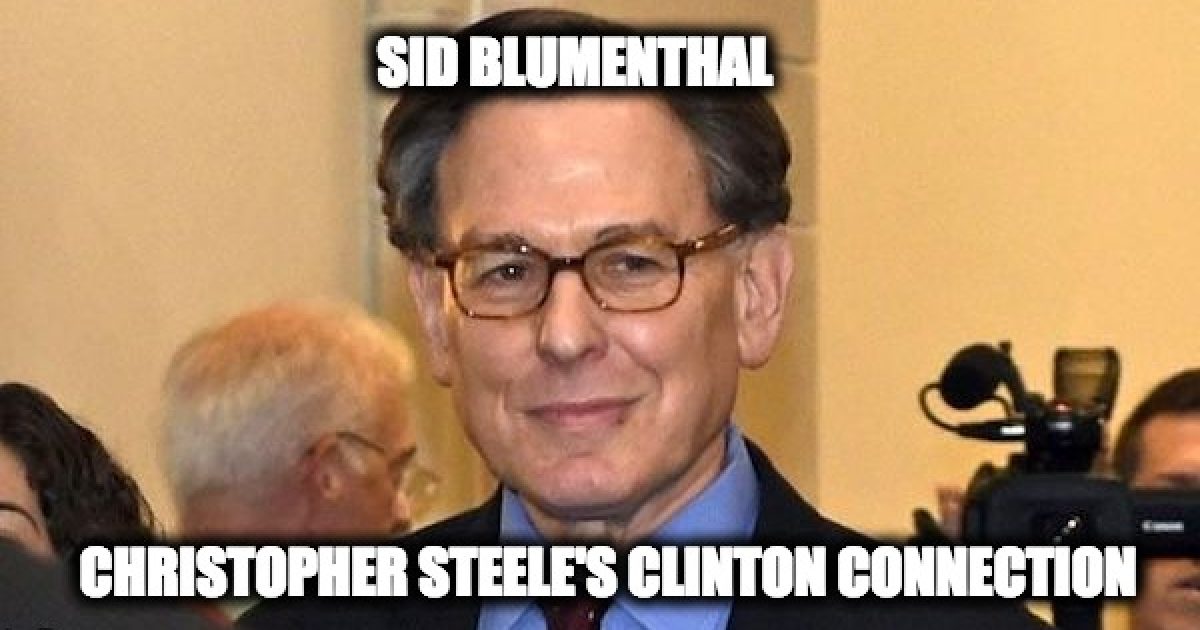 A January 2018 memo to FBI Assistant Director Rod Rosenstein from Senators Chuck Grassley (R-IA) and Lindsey Graham (R-SC) was partially declassified and made public on Friday, 2 February.  A newer version of the release was issued on Tuesday, with fewer redactions. In the memo, the senators assert that in October 2016, while he was compiling his dossier, Christopher Steele received information relevant to the dossier from an associate of the Clintons, and incorporated it in the dossier. During an interview with Martha McCallum on Tuesday, Trey Gowdy implied that the Clinton source was Sid Blumenthal.

This is something we could have put together as likely, using previously known information.  But a newer version of the declassified portion of the Grassley-Graham memo was released Tuesday and is now available — which quotes directly from a Steele memo that hasn’t been released previously to the public (but which the FBI holds) – it looks like it did indeed happen.

The senators’ memo was forwarded to refer Steele to the FBI for investigation: specifically, for apparently making false statements in one forum or another.  The senators summarize their concern in the bottom paragraph on page 1:

That is concerning enough.  There will probably be more to say about the senators’ memo (which they have asked the FBI to have further declassified so that the public can see what they have been able to review).

But this post will focus on the single point, laid out on page 6, that Steele received information from an associate of the Clintons in October 2016, which he apparently incorporated in his dossier on Trump-linked individuals.

The only reason I say “apparently” is out of an abundance of caution, since the paragraph in question is partially redacted.  But the senators conclude from their unredacted review that this is what happened.  And the visible wording directly supports that conclusion.

Here is how the paragraph reads:

One memorandum by Mr. Steele that was not published by Buzzfeed is dated October 19, 2016. The report alleges [redacted], as well as [redacted]. Mr. Steele’s memorandum states that his company “received this report from [redacted] US State Department,” that the report was the second in a series, and that the report was information that came from a foreign sub-source who “is in touch with [redacted], a friend of the Clintons, who passed it to [redacted].” It is troubling enough that the Clinton Campaign funded Mr. Steele’s work, but that these Clinton associates were contemporaneously feeding Mr. Steele allegations raises additional concerns about his credibility.

Speaking to Martha MacCallum of FNC Tuesday Night, Trey Gowdy implied strongly that the source from team Clinton was none other than Clinton’s political hitman,  Sid Blumenthal, the man who invented birtherism.

During the interview, MacCallum asked Gowdy whether “weeks before the election, somebody in the Obama State Department was feeding information from a foreign source to Christopher Steele.”

Gowdy answered “When you hear who the source, one of the sources of that information is, you’re going to think, oh, my gosh, I’ve heard that name somewhere before. Where could it possibly have been,”  MacCallum asked whether the source was foreign or domestic, to which Gowdy answered domestic and added a hint, “I’m trying to think of how Secretary Clinton defined him. I think she said he was an old friend who emailed her from time to time.”  MacCallum asked if it was Blumenthal, and the Congressman said,  “That would be really warm. You’re warm—Yeah.”

“I am troubled by what I read in the documents with respect to the role the State Department played in the fall of 2016, including information that was used in a court proceeding. I am troubled by,” he said.

Last week at  Guardian’s report of a “second dossier” compiled by longtime Clinton crony Cody Shearer, a man with a most unusual résumé.

In an interesting coincidence, the “Shearer” dossier was provided to the FBI in October 2016.

Oh, and it was provided to the FBI by Christopher Steele.

The Shearer memo was provided to the FBI in October 2016.

It was handed to them by Steele – who had been given it by an American contact – after the FBI requested the former MI6 agent provide any documents or evidence that could be useful in its investigation, according to multiple sources.

But apparently, Steele didn’t just pass it on to the FBI.  He put it in his own dossier, according to the Grassley-Graham memo.

If you look at the extant version of the Steele dossier – the one published by BuzzFeed in January 2017 – you see that there is a reference to a 19 October 2016 entry, of which we seem to see only a summary.  In other words, the full memo from the date 19 October 2016 is not published in the dossier version the public has access to.

That comports with the senators’ statement that the memo with that date was not published by BuzzFeed.  We have never seen it; only the FBI and members of Congress have.

But we’ve had reason to suppose it was there.  In April of 2017, Howard Blum wrote at Vanity Fair about the documents provided to John McCain’s longtime aide David Kramer in November 2016, speculating (based on commentary from intelligence experts) that McCain had been given a more complete version of what the public saw from BuzzFeed:

Steele passed him his report. Was this the identical, somewhat sputtering 35-page memo that had already been making the rounds among reporters? Or, as some intelligence analysts believe, was it a longer, more expertly crafted and sourced document, the final work product of a well-trained M.I.6 senior deskman? Neither McCain nor Kramer would comment, but what is known is that Kramer flew back to Washington that same night, guarding his hard-won prize with his life.

Pseudonymous blogger “Grace Laine” took up this forensic challenge, and organized the format for a potential complete Steele dossier, based on the numbering convention of the version published at BuzzFeed.

I’m a bit dubious about the blogger’s suggestion that 79 entries are missing, in the published version, from the beginning of the complete dossier.  (Its first memo is numbered “2016/080.”)  Aside from the “startling” nature of the omissions, noted by Grace Laine, it seems likely that Laine’s conclusion is correct that the numbering convention has to do with dates.

It’s possible to make a sensible case for the second number in each entry having to do with work-day billing in the contract between Fusion and Steele.  But there’s no need to spend a lot of time on that; we’re looking at it from the outside, and can’t be certain.

At any rate, this is what Laine comes up with for the period surrounding 19 October 2016, the date of the unpublished memo referenced by Grassley and Graham:

Grassley and Graham are right to be concerned about this.  Hillary Clinton was running against Trump for president and paying Fusion and Steele to dig dirt on Trump.  Her associate – presumably Cody Shearer – was also passing information to someone in or linked to the State Department, which Steele then received and (a) incorporated into at least one of his own dossier memos, and (b) forwarded separately to the FBI.

Would there have been something wrong with Hillary sending her own lawyer to give the FBI information dug up by a paid operative for her campaign, f she thought it was a national security concern?  No.  But that’s not what she did.

We don’t know if the FISA application from the FBI used information funneled from the Clinton associate through Steele.  Grassley and Graham mention only the 19 October 2016 memo in their letter to Rosenstein and that memo’s data may have come in too late for incorporation in the FISA application (whose date has also been reported as 19 October 2016).

On the other hand, Steele had been in contact with the FBI and passing them information since at least 5 July 2016, so he may well have provided that Clinton-crony-sourced information to the FBI informally, before the date of his 19 October memo.

Grassley and Graham would legitimately suspect “credibility-washing” of Clinton-backed oppo research in this.  (For a useful, related discussion of deploying a “vicarious credibility” card with Steele’s status as an FBI informant, see point C from Andrew McCarthy in a post from 4 February.)

It certainly has the whiff of credibility-washing from here.  The implication is that the purpose of funneling pieces of “information” through Steele (perhaps with the added “credibility” aura of circulating it through the State Department) was to position allegations from oppo research to actually affect the FBI’s activities, with a seeming imprint of legitimacy.

I appreciate and endorse the senators’ desire to have as much as possible declassified so that the public can see what they have seen, and judge for ourselves what really happened.

Given how much of this saga amounts only to what Steele, Fusion, Shearer, Hillary, the DNC, and specific people within the DOJ and FBI were doing, there are few if any national security secrets at issue here.  There is mainly the desire to shield the truth — truth about people who were acting in political roles, not in national security roles — from the American people.

Most of this post was originally seen at Liberty Unyielding