A Frazzled Governor Cuomo Says, “It’s A Lie To Say The Numbers Were Inaccurate”

Cuomo's Ego Is So Massive, He's Forgotten One Of The Basic Rules Of Politics When You Find Yourself In A Hole--Stop Digging. 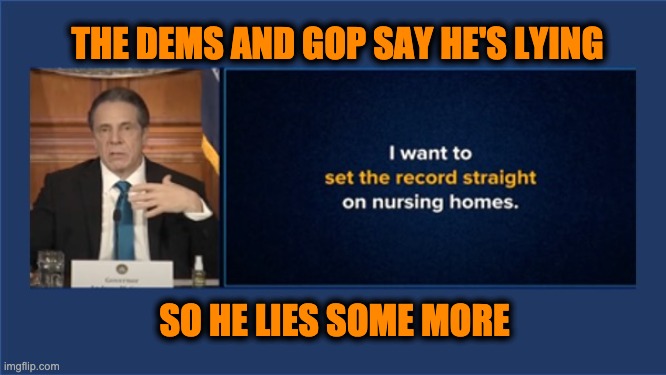 On Friday, an obviously frazzled NY Governor, Andrew Cuomo lied as he tried to push back on the claims that his administration severely downplayed the nursing home deaths because of COVID, then hid the numbers to avoid a federal investigation, saying that it’s “a lie to say any numbers were inaccurate.” Governor Cuomo lied

“I’m not going to let you hurt New Yorkers by lying about what happened. Surrounding the death of a loved one,” Cuomo said, “So, I’m going to take on the lies and the unscrupulous actors, especially when they cause pain and damage to New York.”

Cuomo said it was a mistake to “create a void by not producing public information fast enough” for his handling of nursing home residents during the early days of the pandemic. However, he still hasn’t said those three words that would have prevented this political crisis he is going through, “I am sorry.” To be entirely accurate, Cuomo didn’t say sorry to the families of the nursing home people who died. But he did apologize to his health commissioner and the entire health staff:

“I’m sorry you have to do it in a lousy political environment. But that’s where we are,”

Oh, really, Governor? Politics?  When the Democrat New York State Attorney General Letitia James took a break from harassing Donald Trump to release a report stating the NY State Dept. of Health undercounted COVID deaths in nursing homes by up 50%, was that politics?  Was it political that after she released the study, the official state count of nursing home deaths jumped from less than 9K to almost 13K?  Was that a “void,” or did you get caught in a lie?

Was your secretary Melissa DeRosa being political when she privately apologized to New York’s Democratic lawmakers for withholding the state’s nursing-home death toll from COVID-19? She told them ‘we froze’ out of fear the true numbers would “be used against us” by federal prosecutors.” That wasn’t a “void” that was a cover-up.

The non-political truth is that Cuomo’s March 25th order did not create all of the COVID nursing home deaths in New York State, but it sure as heck caused more seniors to die that would have passed away without the directive.

The non-political truth is that the reported number of nursing home deaths provided to the legislature and, more importantly, to NY residents was a lie. Unless, of course, if in the few days between the AG’s report and the revised numbers’ release, four thousand seniors died.

Today’s rant about Coronavirus (embedded below) proves that Governor Cuomo’s ego is so massive, he’s forgotten one of the basic rules of politics when you find yourself in a hole–stop digging.