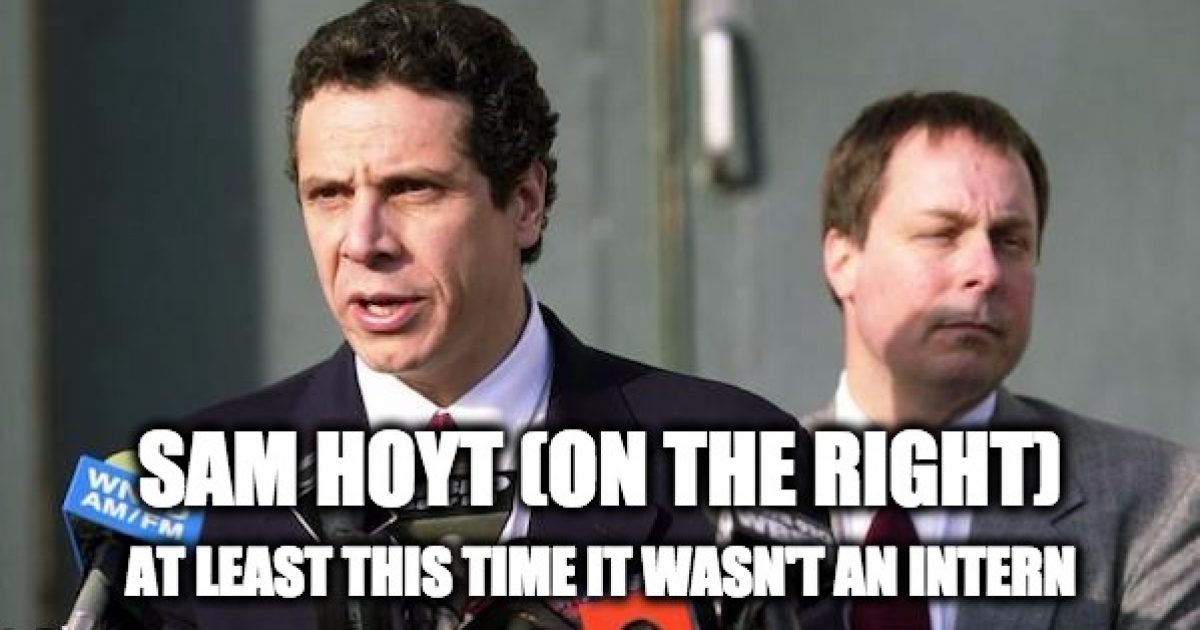 Lisa Marie Cater filed a federal lawsuit alleging that former Empire State Development Corp. (ESDC) regional president William “Sam” Hoyt got her a job at the DMV and then leveraged it to “manipulate, sexually harass and sexually assault” her. Furthermore, her suit contends that Ms. Cater contacted Governor Cuomo’s office at least six times about the sexual harassment, but was met with “deliberate indifference.” Perhaps because Hoyt the governor knew that Mr. Hoyt was a serial filander having been accused of sleeping with two interns when he was a member

The “barrage” of unwanted kisses, crotch-grabbing, stalking, and daily calls, emails, and sexts continued for a year, until Cater found herself on “the brink of a nervous breakdown,” according to court papers.

“When Ms. Cater reported a complaint regarding Mr. ‎Hoyt … it was immediately referred to the State Employee Relations Office for an investigation,” Alphonso David, Cuomo’s counsel, told the Post. “At the same time, Mr. Hoyt was instructed to have no further interaction with the complainant and to cooperate fully with the investigation.”

Ms. Cater met Hoyt at a Democratic Party fundraiser in 2008 when he was a member of the NY State Assembly.  In 2015 when she was a victim of domestic abuse, and about to be evicted, she reached out to her political contacts for help.

By that time Hoyt was at the ESDC very powerful state agency, he

began emailing her, about jobs and apartments. Some missives were flirtatious, the suit says, and “made it a point to advise [Cater] of his powerful position with the state and closeness to the governor and that he was in charge of patronage positions.”

Eventually helped Ms. Cater find a new apartment and a $30k-a-year non-union job at the state Division of Motor Vehicles.

“He hung this job over my head,” she told The Post in her first on-the-record interview. “I felt like a possession of his.”

One day, Hoyt rang her doorbell and then “groped and … kissed” her, leaving her “in state of shock,” according to court papers. Fearful she would lose her job, she adopted a “go along to get along disposition.”

The “harassing calls, texts and emails” continued, even when he was vacationing with his wife, the suit says.

Cater “began to shake uncontrollably” after receiving it, the suit says.

If that isn’t sexual harassment, I don’t know what is.

This wasn’t the first claim of sexual exploits for Hoyt. In 2008 he was disciplined by the Assembly for an inappropriate relationship with a legislative intern (she was the intern for a different lawmaker), and there were reports of sex with a second intern.  Hoyt’s big punishment was that he was banned from having any more interns

Hoyt’s relationship with the intern, who was 23 at the time, became public after a blog posted racy e-mails between him and his lover.

At the time NY Magazine commented,  “See, reading salacious e-mail between lovers is like overhearing other people have sex — it’s kind of riveting, but it makes you embarrassed to be a human. Sort of like the early episodes of a season of American Idol! ”

The intern broke up with Hoyt after finding out the assemblyman may have had an affair with a second intern.

In the latest case, according to the court papers, in August 2016 job Cater says she confronted Hoyt who reacted by grabbing her crotch squeezing as hard as he could, telling her “you know what I want.”

The Buffalo News reported Ms. Cater’s tale of sexual harassment at the end of October when Hoyt was forced out of his job because of her charges, she explained how Hoyt gave her $50K in hush money:

The woman also shared with The News an email she said Hoyt sent her at the time she wished to end the relationship, in which he outlined her desire to help her situation.

“Obviously, there was a physical attraction,” the email said. “I’m a flawed man … I wanted you and tried anything to have you without realizing the repercussions.”

The woman said she eventually brought her complaints to the state Joint Commission on Public Ethics but has not heard from the agency recently.

She also said she received one reply from an Office of General Services ethics officer, an attorney, who initially offered help but was offended when the attorney asked if she wanted money.

“The representation regarding the OGS employee is incorrect,” Heather R. Groll said. “No one ever hung up on the complainant or vice-versa and no one offered her money.”

The woman offered some details about her settlement with Hoyt. She said he came to her apartment to return a key she said he obtained when initially helping her find the dwelling. She told him she also needed for him to remove his name from her bank account, which stemmed from his agreement to co-sign a loan some months before.

“Sam said to me: ‘Would you take this money and go away? You can get the help you need and nothing will happen to you,’ ” she said. “He seemed generally concerned and I believed him. At that point, I was late on my rent and I shouldn’t have said OK, but I did. I was very close to my doctor putting me into ECMC. I spent one night on my kitchen floor wrapped in a blanket.”

Ms Cater finally complained to Cuomo’s office about her sexual harassment at the hands of his buddy Hoyt at least six times but met with hostility and indifference according to the court documents.

But I thought the Democrats were champions of women’s rights?

“The state of New York owes us answers as to why the cries of a sexual harassment victim fell on deaf ears,”  Cater’s lawyer Paul Liggieri told the NY Daily News.

The Governor also owes us answers as to why they hired a man with that record into such an important position.

And in the end, Ms. Cater’s story isn’t that different than the interns. Whether consensual or not, Hoyt was using his political power as a way to get sex.