Saturday Night Deprived: How I Got Banned From Twitter 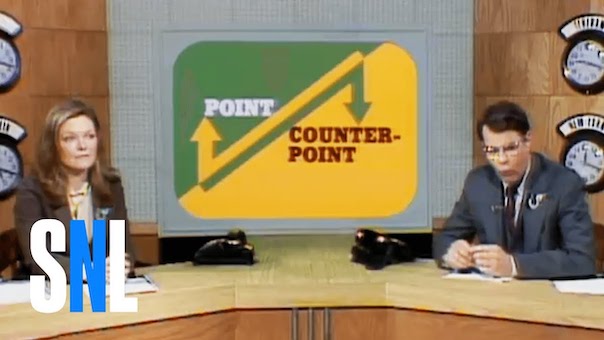 The randomness, humorlessness, and cultural tone-deafness of Twitter’s censors is a sight (or maybe a site?) to behold. My Twitter account has been suspended because, in reply to a direct request for 1970s-era Saturday Night Live references, I repeated, yes, a once-famous, 1970s-era SNL line.

On Twitter, people often have fun with random nostalgia games. Somebody named Jon B. Wolfsthal posted this: “Tell me you watched SNL in the 1970s without saying you watched SNL in the 1970s.” To which, almost immediately, playing off the phonetic similarity of his first name with that of onetime SNL star Jane Curtin, I wrote: “Jon, you ignorant slut.” As my reply was directly responsive to what Wolfsthal had requested, he quickly both “liked” and retweeted it.

After all, for some 20 years or more, for those of a certain broad age range, the saying “Jane, you ignorant slut” was a catchphrase, a way for people (at parties, or while watching ballgames with friends, or whatever) to laugh while feigning mutual displeasure.

For the uninitiated, SNL stars Jane Curtin and Dan Aykroyd did a mock “Point/Counterpoint” segment every week in which they pretended to debate some item in the news. After Curtin made her first point, Aykroyd would start his response by saying the “ignorant slut” line. If Curtin again replied, she often would start by saying, “Dan, you pompous ass.” Or worse.

It was a spoof, and the way those two did it, it was usually hilarious. And to this day, Curtin defends it as contextually appropriate and funny.

Anyway, after my brief reply Tweet, I smiled and went about my business. This was a rather unremarkable, friendly Twitter exchange.

Until about 24 hours later — that is, on Saturday evening, when I received a note from Twitter saying my account had been “locked for violating the Twitter rules. Specifically for: Violating our rules against hateful conduct. You may not promote violence against, threaten, or harass other people on the basis of race, ethnicity, national origin, sexual orientation, gender, gender identity, religious affiliation, age, disability, or serious disease.” And it said the “slut” Tweet was the one in violation.

Well, as I knew I had not harassed or threatened anyone or belittled any of those classes of people, I was baffled. I took Twitter’s offer to appeal and wrote a very polite note explaining the context of Wolfsthal’s Tweet and of the SNL skit. And, very quickly, I received a reply: “Our support team has determined that a violation did take place, and therefore we will not overturn our decision.”

Still suspended. And the only way I can reactivate it, according to the instructions sent by the “support team,” is to admit I violated their rules.

Well, I violated no rules. Not theirs, and not any rules of ordinary politeness or respect, either. For that matter, Twitter is a site that allows all sorts of obscenities to be written out — but, being old-school, I don’t. Ever. I’ll always use euphemisms or asterisks, and I frequently urge other Twitter followers to keep things respectful.

So writing out the F-word is OK, but repeating a well-understood, non-profane comedy line is not. Yeah, whatever. After all, it’s always something; If it’s not one thing, it’s another. One day you’re banned for being a basic conservative, the next you’re banned for suspected slut-shaming.

Until last Saturday night, Twitter had always been berry berry good to me. But now they evict me. Go figure.

That’s OK. I still know that I’m good enough, I’m smart enough, and doggone it, people like me .”

Cross-Posted from the Washington Examiner