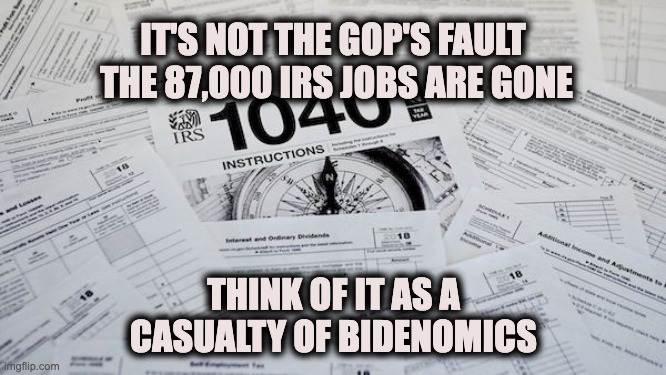 The new-look GOP lead House wasted no time in setting the tone for new priorities. That included taking an ax to the money that was just passed for those new IRS jobs.

It’s exactly what he promised once he finally ran the gauntlet of the House leadership race and gave his remarks just before he would be sworn in as Leader of the House.

House Republicans fulfilled a key campaign promise on Monday, passing legislation to rescind the bulk of an IRS funding boost signed into law last year, marking the first bill passed by the GOP-controlled House this Congress.

The bill, which is unlikely to see action in the Democratic-controlled Senate, passed in a party-line 221-210 vote on Monday evening.

Speaker Kevin McCarthy (R-Calif.) announced that the first bill for a GOP-controlled House would be to repeal the new IRS funding in September, when House Republicans released their “Commitment to America” midterm policy and messaging platform ahead of the election.

…The Republican bill, formally titled the “Family and Small Business Taxpayer Protection Act,” is barely longer than one page. It directs any “unobligated balances of amounts appropriated or otherwise made available” to the IRS from the Inflation Reduction Act to be rescinded. — YahooNews

Chuck Schumer and Biden will not want to see this pushed through. The House of Representatives controls the purse. And it will now become a point of leverage that the Republicans will need to use. When Schumer and Biden look to advance other legislative priorities, having them pass with funding will be a negotiation tool.

Recent news will strip them of any ability to say this is just a tool to ensure the ‘rich pay their fair share’ (whatever that might be). We now know who the IRS has been targeting. And it is NOT the wealthiest 1%.

So says a headline from Money, just yesterday.

The opening paragraphs are even juicier than the headline.

More money, more problems, right? Not with the IRS, according to a new report that suggests the wealthy overwhelmingly escape audits.
Syracuse University’s Transactional Records Access Clearinghouse (TRAC), a nonprofit data and research gathering organization, found in a review of monthly IRS management reports that only 1 in 100 millionaires was audited by an IRS revenue agent last year. Out of the 703,576 tax returns filed in 2022 reporting an income of at least $1 million, roughly 689,000 faced no IRS inquiry. — Money

Suppose the Democrats do NOT adopt this legislation slashing this additional army of IRS agents. In that case, they are welcome to explain to the voter in 2024 why we needed 87,000 more IRS agents auditing poor and middle-class Americans… especially since our country’s financial woes are entirely on the spending side, not on the revenue side.

Chest up, chin out.

Our side is finally starting to win some battles for a change.