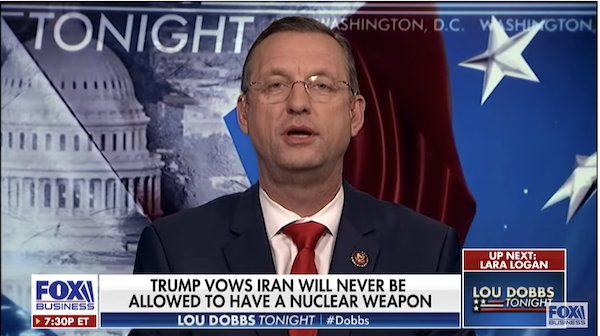 While appearing on Wednesday’s edition of Fox Business’ “Lou Dobbs Tonight,” Rep. Doug Collins, R-Ga., triggered liberals when he said that Democrats are “in love with terrorists.”

“The Democrats are, tomorrow, talking about constraining his authorities as the commander-in-chief, vis-a-vis Iraq,” Dobbs said.

“How venal, how vapid can one party become?!” he asked Collins.

“I did not think she could become more hypocritical than she was during impeachment,” Collins said, referring to Pelosi. “But guess what? Surprise, surprise. Nancy Pelosi does it again and her Democrats fall right in line.”

He continued, telling Dobbs that Democrats are “in love with terrorists.”

“We see that. They mourn Soleimani more than they mourn our Gold Star families who are the ones who suffered under Soleimani,” he added.

“What does this say to the rest of the world? When you have a president who stands up and says we are going to be the voice of reason in the world. We’re going to take out a terrorist,” Collins said. “Let’s remind everybody, Soleimani was a terrorist, someone who killed other people indiscriminately and we took him out, he’s no longer there. Iran is now reeling backward… He should have been killed a long time ago. The president took him out in the proper way.”

Naturally, this triggered leftists who didn’t like the truth being presented to the American people.

Doug Collins should have no role in public life. He is a snake. https://t.co/ccnAUkyKF8

Apparently, they haven’t been listening to the mainstream media, which has bent over backward in its pro-Iranian propaganda.

Liberals melting down over Collins’s remarks didn’t seem to be calling out a Democratic congressman who reportedly said that the U.S. has a “crazy” leader but Iran does not, according to The Washington Post’s Dave Weigel.

Quote of the day so far, from a Dem member of Congress reacting to Iran’s limited strikes: “You need two crazy leaders to start a war, and fortunately, Iran doesn’t have one.”

Celebrities like Michael Moore have also been harsh on Trump for taking out an Iranian terrorist — even to the point of accepting an Iranian bounty for the president’s head.

Bernie Sanders and Elizabeth Warren are hosting a "strategy call" with a pro-Iran lobbying group https://t.co/FL6bxp2col

Actually, Democrats are enamored with anyone who hates Trump, be it terrorists, dictators, or murderers. If Hitler came back and railed against the President, Democrats would line up to defend the former dictator.