The GOP “Repeal and Replace” Healthcare Bloodbath Is Just Heating Up 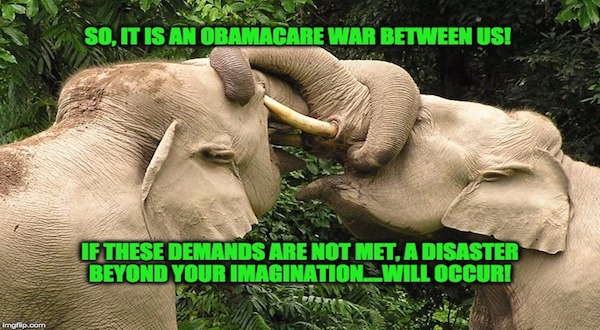 So, it is war between us! If these demands are not met, a disaster beyond your imagination….will occur! –The Phantom of the Opera

Two new interviews with GOP leaders show the dangerous position that Republicans find themselves in with the mess that is Obamacare.

Speaker of the House Paul Ryan (R-WI) and Senator Tom Cotton (R-AR) essentially offered the opposite answer to the very same question when asked about the possibility of passing the recently announced healthcare bill. Representative Ryan believes that if the GOP does not pass their bill to “fix” Obamacare, they risk losing the House majority to Democrats in 2018. Senator Cotton is of a different opinion, arguing that if the GOP passes what he believes to be a terrible healthcare bill, they risk losing the House in 2018.

Ryan tried to downplay the seeming turmoil that the GOP currently find themselves embroiled in by telling CBS’ John Dickerson that the current intra-party debate was a normal, healthy part of the legislative process.

However, Ryan also agreed with President Trump who recently said that if the GOP can’t pass the healthcare bill through Congress, there would be a “bloodbath” at the polls in 2018.

“I do believe that if we don’t keep our word to the people who sent us here, yeah,” Ryan said, there would be a bloodbath awaiting the GOP in 2018. “The most important thing for a person like myself who runs for office and tells the people we’re asking to hire us, ‘This is what I’ll do if I get elected.’ And then if you don’t do that, you’re breaking your word.”

“I would say to my friends in the House of Representatives with whom I serve, ‘Do not walk the plank and vote for a bill that cannot pass the Senate and then have to face the consequences of that vote… I’m afraid that if they vote for this bill they’re going to put the House majority at risk next year,”

Cotton told ABC’s George Stephanopoulos on This Week. Cotton explained that he thinks the bill is “dead on arrival” in the Senate where a small, but strong contingent of conservatives will be enough to scuttle the bill, and so he doesn’t think the House should risk the GOP’s entire legislative agenda by trying to pass a healthcare compromise that not every one is sold on.

“We have majorities in the House and the Senate and the White House not only to repeal Obamacare and get health care reform right, but to reform our taxes and our regulations and build up our military and accomplish many other things, and I don’t want to see the House majority put at risk on a bill that is not going to pass the Senate. That’s why I think we should take a pause, try to solve as many of the problems on both Medicaid and the individual insurance market in this bill in the House and then allow the Senate to take its work up. The bill probably can be fixed, but it’s going to take a lot of carpentry on that framework.”

I tend to agree with Senator Cotton on this, not because Obamacare repeal shouldn’t be the first thing that the GOP does, but because this bill is not going to fix our problems it’s only going to become an albatross around the neck of the party in 2020 and beyond. Once this bill passes America’s healthcare problems becomes the GOP’s burden and people will blame them for every problem that arises because of the healthcare bill.

Instead of passing a bad compromise, I have a suggestion for the GOP.

Pass a simple, clean REPEAL bill that returns the healthcare industry to where it was before Obamacare was enacted. Then pass a series of smaller bills speaking to the various problems that the healthcare industry was suffering back then. For example, once Obamacare is repealed, the GOP should pass a bill allowing people to buy insurance across state lines. The party should also push tort reform to help make the work doctors do cheaper and safer. The GOP should then also pass a bill allowing consumers to purchase medication and pharmaceutical products from Canada at their own risk. The GOP could even take up the issue of helping those Americans who simply CANNOT afford insurance, with a far smaller bill than Obamacare. There is much good that the GOP can do, but it will be far easier to accomplish their goals if they repeal Obamacare first and then handle each issue with it’s own piece of legislation… instead of trying to build one massive bill to make everyone happy (which would be impossible).

Get your act together GOP, our future depends on it.