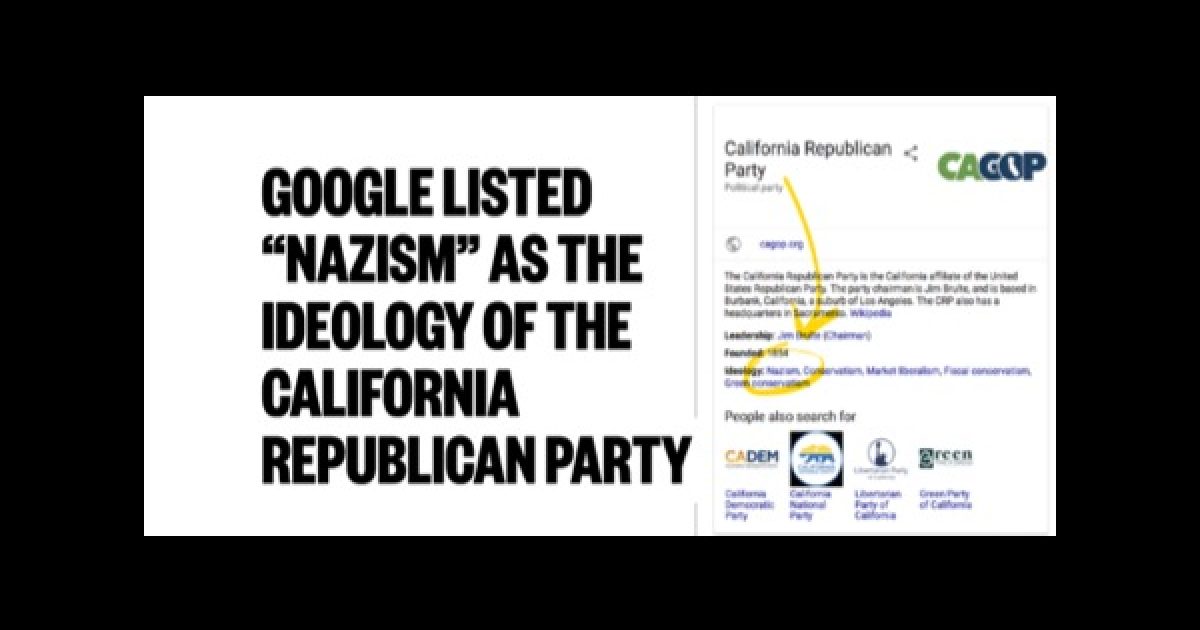 Google is one of the primary liberal gatekeepers of all internet information (along with Twitter and Facebook). Because of their false labeling and censorship Conservative and GOP oriented sites, have been losing traffic resulting in a steep drop in the ad revenue that keeps them (including me) afloat.

Just this week Google has taken things up to an unprecedented level, officially labeling a California Republican group as Nazis.

In the “knowledge panel” that provides easy access to information next to search results, Google was showing “Nazism” as an “ideology” of the party as of Thursday morning. The word “Nazism” was hyperlinked to a secondary page that shows “Nazism” alongside other “ideologies” of California Republicans like “Conservatism,” “Market liberalism,” “Fiscal conservatism,” and “Green conservatism.”

California voters have been casting their absentee ballots for weeks ahead of Tuesday’s statewide primary elections, which will help determine the majority in the House of Representative and the potential next governor of the world’s fifth-largest economy.

And you know that the slander is extreme when ultraliberal VICE News is reporting on Google’s anti-conservative discrimination.

This blatant mislabeling of the ideals of American conservatives is more than erroneous, but it is repugnant. And it personally makes me seethe with anger.

I am a Republican, but more important than my party affiliation is my faith. I am a Jew who lost family in the Holocaust. And I am sick and tired of liberals labeling Republicans with fake Shoah references! (Shoah is the word Jews use for the Holocaust it’s Hebrew for disaster).

Before Google has the right to labels this Jewish Republican (or any Republican) a Nazi, they should answer a few questions 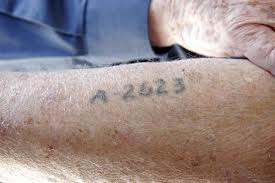 Hitler chose that method of Identifying my relatives because tattooing is prohibited in the Jewish faith. Hey Google,  is that what you meant when you claimed Republicans like me are Nazis?

I never met some of my family because the Nazis killed them and buried them in mass graves or cremated their bodies (cremation is also against Jewish Law).  Google, when you said Republicans were Nazis were you alleging the GOP does that to people?

If Republicans don’t kill, cremate, and bury people in mass graves, then calling us Nazis is not appropriate.

The Nazis conducted horrible painful medical experimentation on humans. Perhaps the most well-known were the horrors that Josef Mengele did to twins and other victims at Auschwitz. Through these experiments, he hoped to prove the superiority of the Aryan race. He experimented on over 1,500 pairs of twins along with other Jews and Gypsies, injecting dye into their eyes blinding them, or chloroform into their hearts killing them, or sewing twins together trying to create conjoined twins, forcing them into freezing water (like the picture below), and other experiments too horrible to repeat.

Do the Republicans authorize horrible medical experimentation on people like Mengele did? If we were doing that believe me, it would be on the front page of the Washington Post (perhaps even with a named source).  Unless the Post is covering up similar experimentation like Mengele, saying Republicans Nazis is both insensitive and ignorant.

After the Nazi’s gassed their victims, they collected their hair, their clothes, glasses, gold teeth, and even artificial limbs to be used by the Reich. Perhaps I was watching “Family Feud” instead of the news the day my fellow Republicans murdered people and recycled what was usable. But if I didn’t miss it, well then Republicans aren’t Nazis.

I know… perhaps Republicans gassed innocent victims, collected their gold teeth and artificial limbs, etc. while they were sleeping, so no one complained. Maybe the only network that covered the crime was MSNBC which I try to avoid, and that’s why I don’t know about it.

And what of the camps? Does the GOP round-up people they don’t like, force them into boxcars like cattle and deliver them to concentration camps? Because if they ever did, I would be the first to call them a bunch of Nazis.

The truth is Republicans have never forced tattoos on people, or crowd them into death camps where they would suffer torture till they were gassed, shot, thrown in ice water, or died some other horrible death. They never ordered the mutilation of corpses by taking out what can be reused. And never threw bodies thrown in mass graves or had them cremated. 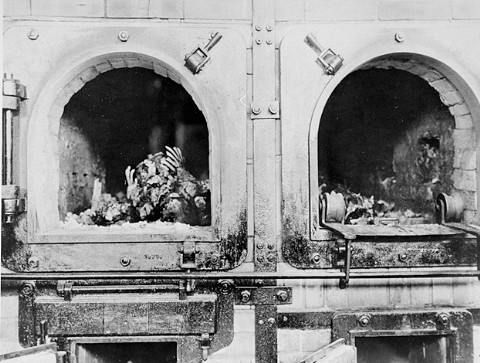 Until there is evidence of any of the above, saying Republicans are Nazis is false, inappropriate, and cheapens the memory of the horrors my relatives, and families of the millions of others who suffered during the Holocaust at the hands of Nazis

So Google. If you want to make fun of Republican policies or criticize what we do—go ahead. Despite eight years of Barack Obama in the White House, it’s still a free country. But if you do decide to call us names–leave the Holocaust out of it, no Hitler, no Nazis, no Fascists, no NOTHING!  Inappropriate references to the Holocaust is a disservice to people who use your platform. Much more important is the fact that it is a disservice to the memory of the suffering of the real victims of the real Nazis.