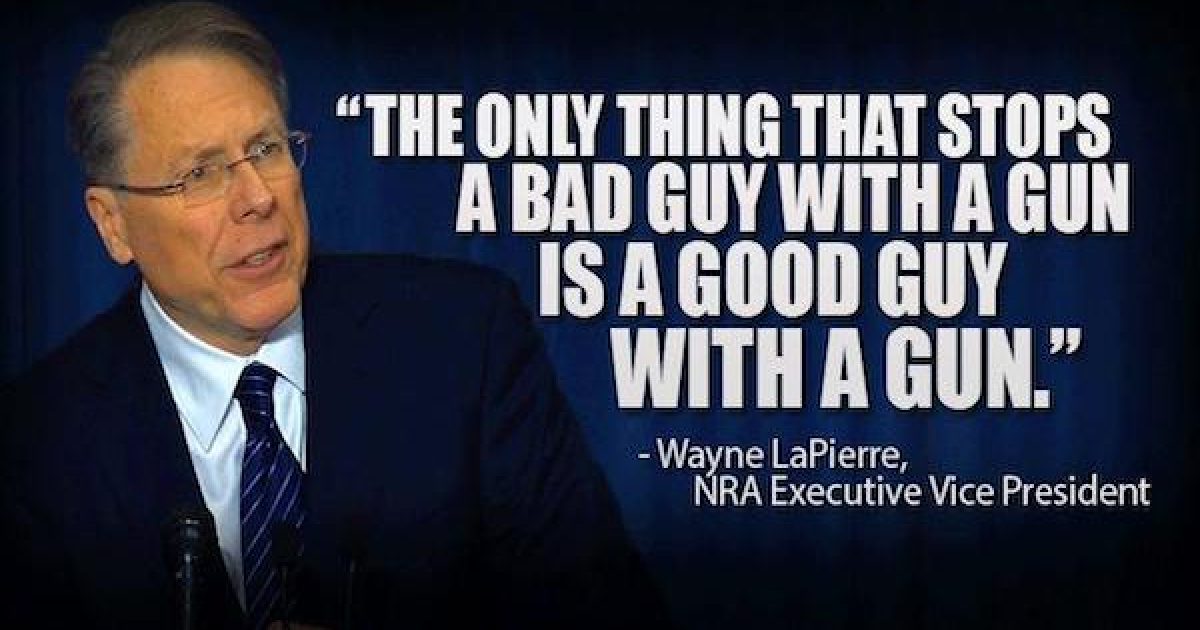 by Dave Workman and Jeff Dunetz

The mainstream media ridiculed the NRA’s Wayne LaPierre when he said, “The only way to stop a bad guy with a gun is with a good guy with a gun.” But La Pierre was again proven correct during the past year. Armed “good guys” made a very big an positive difference in 2018

While the news typically concentrates on gun-related crimes – including this week’s car smash burglary of a Bellevue, Washington gun store in which dozens of handguns were taken – law-abiding gun owners made a difference more than once during 2017, and the odds are that armed citizens will do it again in 2018.

The Bellevue burglary was caught on camera. Thieves used a stolen car to ram through the doors of the shop and then used it to get away. This is the kind of crime that seems to be on the upswing over the past few years, and it underscores the failure of gun control extremists to understand that one more law will keep guns out of the wrong hands,  something people responding to the story at KING 5 News’ Facebook page made abundantly clear. That was the bad news.

The most notable of these cases was the church shooting in Sutherland Springs, Texas, where an armed citizen, who also happens to be a firearms instructor, opened fire on church shooter Devin Patrick Kelley, bringing to an end his rampage that claimed 26 victims.

Alan Gottlieb, chairman of the Citizens Committee for the Right to Keep and Bear Arms summed it up by noting that good guy Stephen Willeford used a much-demonized semi-auto modern sporting rifle to confront Kelley.

“Isn’t it ironic,” Gottlieb said at the time, “that a private citizen, who the anti-gunners would prefer to be defenseless, used a rifle that gun control extremists have tried to ban with the claim that such guns do not belong in civilian hands?”

On May 3, 2017, a man entered the Zona Caliente sports bar in Arlington, Texas, began speaking incoherently, and opened fire. At the time of the shooting, there were more than a dozen people inside the restaurant. A patron, who was also a Right-to-Carry permit holder, shot and killed the shooter, ending the incident. Arlington Police Spokesman Christopher Cook told the Dallas Morning News that the armed citizen was a “hero,” and noted that he “prevented further loss of life.”

The armed citizen shot Jones, who was armed with two guns and two knives, the newspaper said. Authorities called the armed Good Samaritan a hero for saving the lives of other patrons.

In September, a 22-year-old good guy attending church in Antioch, Tennessee intervened when a man identified as Emanuel Kidega Samson came through the doors and started shooting. But Robert C. Engle, 22, immediately got physical with Samson and before it was over, the gunman had been shot in the chest with his own gun, and Engle had retrieved his gun to hold Samson until police arrived.

These are just a few of the many examples. And that’s not to say the good guy will always stop (or try to stop) the bad guy.

By some estimates, there are more than 16.3 million active concealed carry permits and licenses in the United States. They’re a law-abiding group, according to author/researcher John Lott, president of the Crime Prevention Research Center. Three states – Texas, Pennsylvania, and Florida – each have more than 1 million carry licenses in circulation. The Concealed Carry Reciprocity Act is aimed at letting those citizens go armed across all 50 states, but the gun prohibition lobby is engaged in a hysteria-laden crusade to stop that legislation in the U.S. Senate.

The bill itself, if made into law, would allow Concealed Carry Permit holders to carry their firearms across state lines without fear of arrest or imprisonment. Every state has its own laws on the books about how to deal with gun ownership and some, like New Jersey, make even transporting a firearm a crime. Meaning that a citizen with a legal firearm moving from North Carolina to New Hampshire (as an example) who gets pulled over in New Jersey and found with a firearm could be arrested, imprisoned, and even see real jail time for their “crime.”

But another advantage of concealed carry reciprocity is that there will be more “good guys with guns” with the potential of saving lives.  And to borrow from the anti-gun people, if this can save just one life…

The Concealed Carry Reciprocity Act may become one of the biggest early legislative battles in 2018.