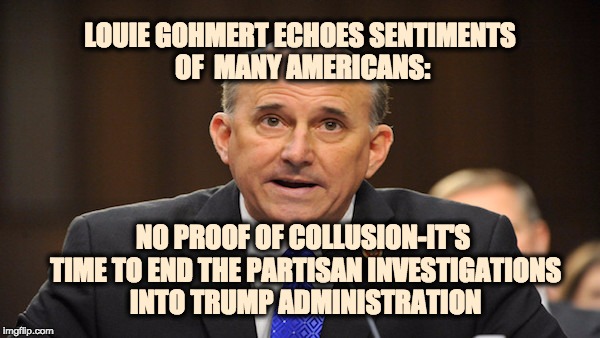 Congressman Louie Gohmert (R-TX) is done with the foolish and partisan “investigations” into the Trump administration’s activities.

In a recent appearance on Fox News the rambunctious Texas Congressman spent five minutes tearing apart the arguments for the investigations, and explaining why it’s James Comey who should be under investigation, not President Trump. Gohmert further argued that Robert Mueller was a terrible candidate to handle any investigation into this matter because he has multiple conflicts of interest with this case.

However, Gohmert’s strongest arguments came when he outlined the truth that the real collusion happening in our government is actually being undertaken by Justice Department officials still loyal to the Obama administration. He also reminded America that if President Trump is “guilty of obstruction” then President Obama must also be guilty of “obstruction” because he partook in the same practice on many occasions.

We now know there is no collusion with this administration and Russia, so we can drop the independent counsel, special counsel, there is no further need and now that we know the collusion between Comey and Mueller, before he testified, he also ran things by other people in the justice department when they did the memo. there is so much collusion, real collusion in the Justice Department.

The “investigation” into the possibility that Trump “obstructed justice” is a farce, and we don’t even know that it’s actually happening because the report is based on an anonymous source in an article from a liberal newspaper. This is simply more of the same new breed of “yellow journalism” that has infected the mainstream media today. There are no negative stories to report on President Trump so let’s talk about things that we have no evidence for in a way that makes the administration look bad. This is what passes for news today.

By the way, Gohmert outlined many of the DOJ’s problems just a few days ago: