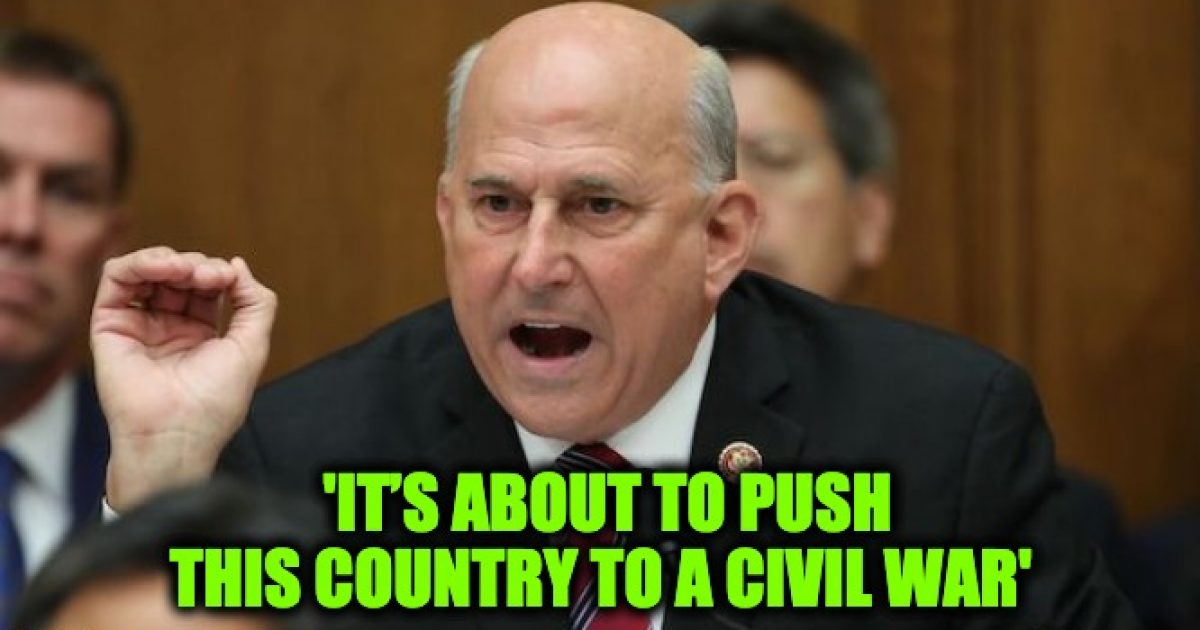 While speaking on the floor of the House Thursday, Rep. Louis Gohmert, R-Texas, responded to the Democrats’ alleged “impeachment inquiry” vote by calling it a “coup” and warning that it will “push this country to a civil war.”

Gohmert also complained that there were “armed guards outside of the sensitive, compartmented information facility, the SCIF,” where depositions from witnesses testifying as part of the inquiry took place.  “Never in the history of this country have we had such gross unfairness that one party would put armed guards with guns to prevent the duly authorized people from being able to hear the witnesses and see them for themselves,” he continued.

“And then, oh, we hear from this resolution today, we’re going to send you the depositions after we get through doctoring and looking at and editing the transcripts, we’ll send you those, so you have the evidence you need. That’s not the kind of evidence that a coup should be based on. If we’re going to have what they’re trying to legalize as a coup, we ought to have a right to see each of those witnesses,” he added.

“You see, they want it to be a one-sided, non-due process, sham court. It’s about to push this country to a civil war if they were to get their wishes,” he further stated.  “And if there’s one thing I don’t want to see in my lifetime, I don’t want to ever have participation in, it’s a civil war. Some historian, I don’t remember who said, guns are only involved in the last phase of a civil war. What’s gone on here is not protected by the Constitution. It’s not protected by the institutions. It’s not protected this little experiment in self-government. What it has done is put it all at risk.”

He further warned that if this isn’t stopped, a precedent would be set that could be used by Republicans in the future to oust a Democrat president.

Gohmert is right in his assessment.  The Democrat Party, fueled by hatred of President Trump, has now codified what can only be called a seditious conspiracy to oust Trump, based on lies, smears, and innuendo.

Worse yet, all but two House Democrats have joined in that conspiracy to enact a coup d’etat against a sitting president and thankfully every Republican member voted nay.

Republicans need to fight like they have never fought before, even if it means formally charging House Democrats and their leaders with seditious conspiracy.

Gohmert is also right about one other thing.  As others have warned in the past, this action by sore-loser Democrats angry about the 2016 election could very well spark the kind of unrest this country has not seen in 150 years.  Could it be that they really want a second bloody civil war?

Rep. Gohmert is one of those rare politicians who tell the truth no matter how controversial it might be. In 2018 when politicians were fawning over Robert Mueller, Louis Gohmert provided the truth that the special prosecutor’s background wasn’t as stellar as the Democrats and the MSM claimed it was. He was one of the first to expose deputy AG Rod Rosenstein as a member of the “deep state,” who offered to wear a wire while meeting Trump not once, but twice. He went on TV to confirm that Hillary’s emails were grabbed by China.

And now Gohnert has his hands on the pulse of America. Throwing an innocent Trump out of office will start the country down the road to some sort of revolt. Maybe it won’t happen immediately but it will the fabric of this country and begin to irreparably divide the country. Gohmert is also correct when he says if the Schiff impeachment is successful, expect the same crooked procedures being used against the next Democratic Party POTUS, as the divide increases.