U.S. Supreme Court Tells Dirtbag Jesse Ventura To GET OUT (And Forget The $1.8 Million) 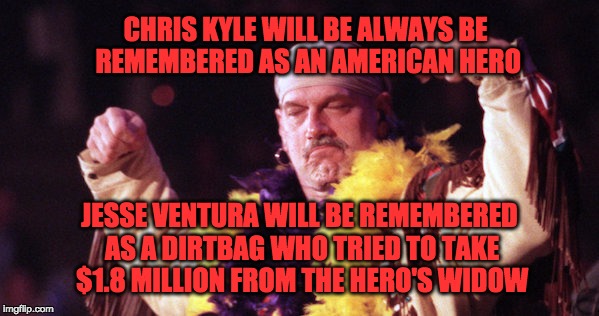 On Monday the U.S. Supreme Court told the former WWF Wrestler/ former Minnesota Gov.conspiracy theorist and all-around dirtbag Jesse Ventura to go away. They rejected his attempt to reinstate a $1.8 million defamation verdict against the estate of late American hero Navy SEAL Chris Kyle that was struck down by the 8th U.S. Circuit Court of Appeals this past June. In the first round Ventura who doesn’t need the cash, was awarded $1.8 million that for all intents and purposes came from the pockets of Taya Kyle, the hero Kyle’s widow.

Jesse Ventura may be the only ex-Navy Frogman who launched a defamation suit against a war hero, over an incident mentioned in the hero’s book, The hero being Chris Kyle, the most lethal sniper in U.S. Military History, and the incident related in his book “American Sniper” was a fist fight between Kyle and unnamed retired member of the USN.  The book didn’t even name the self-serving creep Ventura.

“The appeal wasn’t overturned because Chris Kyle didn’t lie,” Ventura said in a statement. “He did lie — and that was proven in court. The appeal was overturned on a technicality. And the judges went against their rules [and] laws to do it. Politics.”

He vowed he would get a retrial and that “the truth will come out again in the new trial.”

The truth is Chris Kyle didn’t lie, because he didn’t even mention the dirtbag.

As for being defamed, even if the story in Kyle’s book was about Ventura, it was the former Minnesota Gov./WWF Wrestler/ conspiracy theorist/dirtbag who outed himself as the person in that passage of the book.  When one thinks about it, nothing defamed Ventura more than the fact that he was trying to take $1.8 million from the widow of a war hero.

In the end it doesn’t matter, because a decade from now Chris Kyle will still be recognized as an American hero, Taya Kyle the widow of a war hero, and Jesse Ventura .. well perhaps because of jealousy or a desperate attempt to pull himself out of the trash heap of former celebrities he so richly deserves Jesse Ventura decided to attempt to take money from Chris Kyle’s widow. He will be remembered as a clown, a conspiracy theorist, and a low-life dirtbag.

In previous interviews, Ventura vowed to move permanently to Mexico where he has a winter home, if he lost the case.

That means there are two great reasons for him losing the case. Now remember Jesse..you promised, GET OUT! Or as they say in Spanish, “Adiós dirtbag y no dejes que la puerta golpea tu culo feo en la salida“