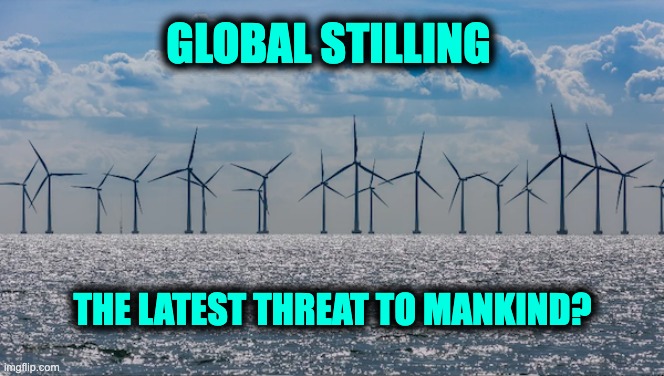 The far-left Gaia worshippers say that the “Climate Crisis” is responsible for floods, droughts, forest fires, hurricanes, tsunamis, earthquakes, volcanic eruptions. A longer list of crazy things blamed on climate change is at the end of this post. Their latest crazy belief is that their unproven hypothesis caused the slowing of global wind speeds. global stilling

Is there nothing that “climate change” doesn’t affect?

Industry experts are warning that climate change may have caused wind speeds in Europe to plummet this year in news that threatens to drive energy prices even higher.

Long labelled as a saviour of the energy industry, wind farms have cropped up across the continent in recent years and have been billed a low-cost, renewable and dependable source of power…

…Experts are blaming a growing phenomenon known as ‘global stilling’ – whereby measurable wind speeds across the world’s continental surfaces have decreased by as much as 15 per cent since 1980.

Global stilling—a “growing phenomenon”… sure it is.

I’m old enough to remember when climate grifter and former Vice President Al Gore insisted that lower Manhattan, San Francisco, and half of Florida would be underwater by now because of the terrifying melting of ice in Greenland and Antarctica.

That didn’t happen. Frankly, the climate hysterics have been 0 for 50 in half a century of their Chicken Little-like predictions of an “eco-pocalypse.”

But they are the Experts™, and we are to bow and scrape to the Expert class.

Atmosphere expert Professor Paul Williams, of the University of Reading, told the Financial Times that winds have ‘generally weakened over land over the past few decades’.

He said one explanation for plummeting wind speeds could be ‘human-related climate change’, that would see poles warming ‘faster than tropics in lower atmosphere’ areas.

Prof Williams said: ‘This would have the effect of weakening the mid-latitude north-south temperature difference and consequently reducing the thermal wind at low altitudes.’

“One explanation for plummeting wind speeds could be ‘human-related climate change’….” Oh. So it’s a theory. Then again, their entire climate change story is just a hypothesis.  And when they present their evidence, it’s based on computer models. Here’s a little secret the clime crazies won’t tell you—computer models are bull crap. You would be better off asking a runway model. Scientists don’t know all the variables affecting the Earth’s climate. It’s impossible to create a working computer climate model.

This is the same group of theorists who claimed

Two years climate scientists claimed that Netflix contributed to global warming. Per Maxime Efoui-Hess, which is associated with the French think tank The Shift Project: “Watching a half-hour show leads to emissions of up to 1.6 kilograms of carbon dioxide.” That’s the equivalent of driving 3.9 miles.

Note: what the climate crazies and the woke crowd say, I am still looking forward to watching the Dave Chapelle special on Netflix (as for the porn—well, that falls into the TMI folder.

Let’s just file that with the other climate theories by the “experts,” shall we?

After we got there with President Trump, Joe Biden is the first President since the Nixon energy crisis in 1973, who is deliberately moving this country away from making America energy independent.

In recent years, the “green” shift to wind and solar and away from fossil fuels is now finally seeing the fit hit the shan, so to speak. The wind isn’t reliable, and as we become more reliant on electronics, we will continue to need even more energy.

The greenies’ “wind farms” filled with those and hydrocarbon-filled wind turbines that are not “green” in their production ignore the environmental damage where the windmills are placed. They kill birds and bats and are bloody expensive to boot… maybe having hundreds of these things harnessing the wind might themselves be affecting wind currents by causing a type of windbreak. Ya think? Maybe? Perhaps?

In 2013 research, Keith described how each wind turbine creates a “wind shadow” behind it where air has been slowed down by the turbine’s blades. Today’s commercial-scale wind farms carefully space turbines to reduce the impact of these wind shadows, but given the expectation that wind farms will continue to expand as demand for wind-derived electricity increases, interactions and associated climatic impacts cannot be avoided.

Oh, would you look at that!

Yes, the pretty, Hollywood people jetting off from LA to NYC for the Met Gala get a pass for their “good intentions,” but your 2015 Toyota Corolla you use for your commute is “literally killing the planet!” And a message for those Hollywood green jet setters, I refuse to take the advice of the Swedish scientist who said that it may be necessary to turn to cannibalism and start eating human flesh to save the planet from climate change. (giving new meaning to the expression bite me)

Britain has been relying more and more on the wind as an energy source in recent years, but it is down dramatically. As late as September, their National Grid reported that wind power provided less than 3 percent of the UK’s total electricity generation — compared with annual averages of 18 percent. The real question is, how could that all happen? The climate change activists should be creating even more wind. After all, they are all a bunch of blowhards.

It gets even crazier. My friend Marc Morano who runs the great site Climate Depot pointed out that this is the second time they claimed the winds have died down, and in between they claimed disastrous high wind speeds. Read about it here–> Media Claim Disastrous Higher Wind Speeds – After Claiming Lower Speeds.

Now that we know climate change has (NOT) screwed up the wind, let’s take a look at other things the climate crazies have blamed on their unproven hypothesis: