Rudy Giuliani Has COVID-19: Leftists Celebrate ‘No One Deserves It More’ 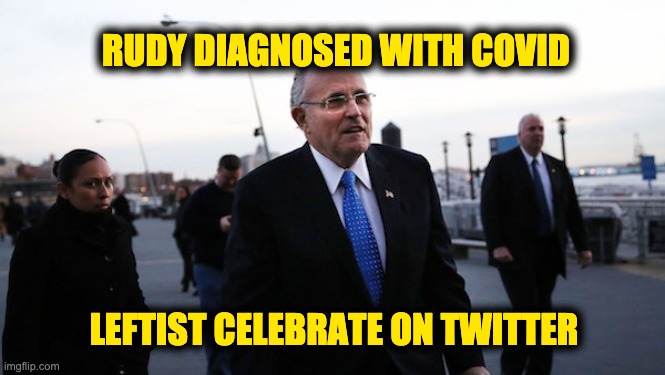 Some liberals are just plain nasty. They literally call for the destruction of the United States on a daily basis while threatening violence against those who disagree. Whether one supports the President or not, likes Rudy Giuliani or not, a human being with a heart would not be happy when someone catches a potentially deadly virus. Giuliani has COVID leftists celebrate

But the anti-Trump left had a field day when the President announced that his personal attorney, Rudy Giuliani, was diagnosed with COVID-19.

Giuliani is much more than President Trump’s personal attorney. He’s the former U.S. Attorney who put Mafia Dons in jail, the ex-NYC Mayor who cleaned up the city and displayed so much leadership after 9/11/01, that he was given the nickname America’s Mayor. But despite his decades of service to this country, the lefties were happy that Giuliani caught the China Virus.

Check out some reactions from lefties after learning Rudy Giuliani was ill:

Bout time, no one deserves it more @RudyGiulianli . Besides of course @realDonaldTrump . Thanks for the 280,000 dead on your watch you Clownstick McFuckface. https://t.co/FmTLrma4nj

This blue check liberal who identifies himself as a Mental health counselor laughed at the Guiliani news—that’s crazy.

Got his ass finally.

1. Rudy Giuliani was the WORST Mayor.
2. He has been farting tirelessly.
3. This was the most secure election.
4. You are the most corrupt "president"
5. It is the trump Virus, not the China Virus.
6. Rudy will only get worse.
7. Carry your crooked ass into prison.

The ghoul, Giuliani, has covid. Instead of being a hypocrite & wishing him well, I'll remind people that gathering in groups during a pandemic is completely irresponsible & makes your body a weapon. Wear a mask & practice social distancing. Failure to do so makes you an asshole.

Rudy even got a slam from China.

Thank you to all my friends and followers for all the prayers and kind wishes.

Recovering quickly and keeping up with everything.

His tweet about getting better upset the liberals also.

Too bad about the 282,257 Americans who didn’t get the same top notch treatment.
You know, those you ignored while waging a war on facts and on science to appease a madman who was only using you to help him repay crippling debt.
Shame on you.
Shame on you, you sick, sad fool.

You infected possibly hundreds of people and some may die because of YOUR ACTIONS.

Satan is waiting for you. Sooner than you think.

Are these the same leftists who reacted to the election by preaching the country should unite?

I told you, nasty people.