My dad of blessed memory would say if you cant do it right, don't bother 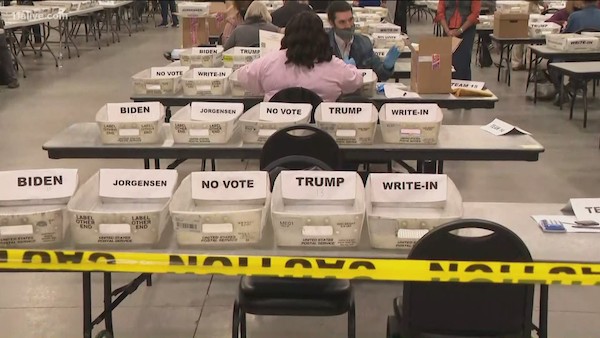 This is the week the president’s legal team will have to begin presenting specific evidence of election hanky panky to justify their court cases about legal and/or illegally cast ballots. They need to start showing something, or all their hard work will be for naught.

Georgia is undertaking a hand recount of ballots cast in the 2020 election to ensure ballot integrity. Still, with absentee mail-in ballots already separated from their envelopes, it may be impossible to pull back any votes even if they were cast by ineligible voters.\\

Because under state law, a voter’s signature goes on the envelope containing the secret ballot, not the ballot itself. As a result, even if several voters are found to have cast votes that were ineligible, there will not be an easy way to remedy the damage caused without comparing the envelope signature to the signature on the DOEs signature card.

If it’s correct, it gets counted; if not, it gets rejected, and then, “The board of registrars or absentee ballot clerk shall promptly notify the elector of such rejection, a copy of which notification shall be retained in the files of the board of registrars or absentee ballot clerk for at least two years. Such elector shall have until the end of the period for verifying provisional ballots contained in subsection (c) of Code Section 21-2-419 to cure the problem resulting in the rejection of the ballot.” That section provided until Nov. 6, three days after the election, for voters to cure their ballots.

That in itself is a dubious process of resubmitting ballots days after Election Day — Republicans are challenging that as well as extending Election Day beyond that set forth by Congress under Article I, Section 4 of the Constitution and 2 U.S.C. §7 which states “The Tuesday next after the 1st Monday in November, in every even-numbered year, is established as the day for the election, in each of the States.”

This effectively amended state law, clearly violating Article I, Section 4 of the U.S. Constitution, which states, “The times, places, and manner of holding elections for senators and representatives, shall be prescribed in each state by the legislature thereof; but the Congress may at any time by Law make or alter such Regulations…”

Even if these unconstitutional actions would not change the outcome of the presidential contest of 2020, federal courts should still hear these challenges. They could affect down-ballot races and will certainly impact how future elections are handled in the U.S.

On the administrative and judicial amendment to the signature matching requirement, the danger of removing the voter registration card from the mix is that it becomes possible for individuals to both request and submit absentee mail-in ballots on behalf of somebody else — potentially without their knowledge.

And now that the ballots have been separated from the envelopes, even if a great number of voters are later determined to have been ineligible to vote after the fact — whether because they live out of state or the signatures didn’t match — the votes themselves will remain tabulated.

Where the Georgia recount could get really interesting is if the Trump campaign and Republican Party can find enough ineligible votes having been cast that either exceed former Vice President Joe Biden’s 14,000 vote lead over President Donald Trump in the state or could potentially make Sen. David Perdue (R-Ga.) the clear winner of one of the Georgia Senate races currently headed for a January 2021 runoff, which would give Senate Republicans a clear majority right now.

At that point, the Georgia state legislature would have to reconcile the popular vote result in the state versus a likelihood that the result might change if only legal votes are counted. What is still unknown is just how many ineligible votes were cast, not only in Georgia but other battleground states like Pennsylvania, Michigan, Wisconsin, and Arizona. Stay tuned.