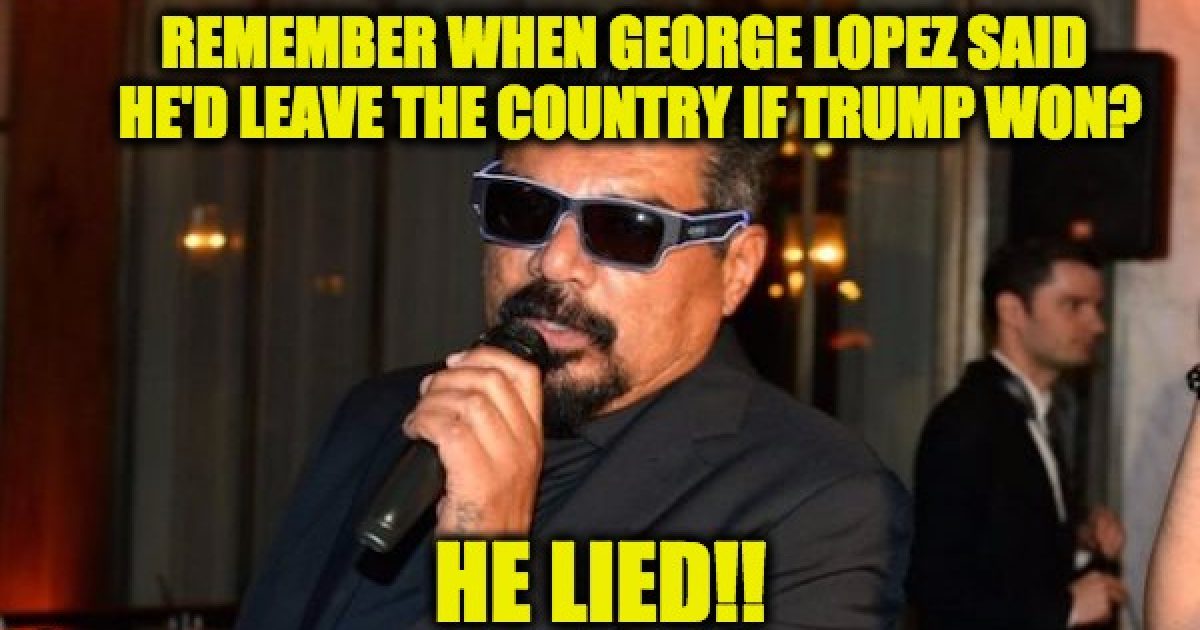 Liberal performers should take this as a warning, many Americans hate your Ad Hominem attacks on the President of the United States. The American political left may believe that their anti-Presidential stance is gaining them favor with U.S. voters, but the reality of the situation is far more complex.

Hollywood, in particular, has been especially toxic toward President Trump, thanks to the precedents set by personalities such as Snoop Dogg, Kathy Griffin, and Jimmy Kimmel, all of whom have attempted to position themselves onto the top of the ever-decaying “resistance” landfill.  There seems to be an imaginary badge of pride to be earned in liberal land for the most egregious hatred displayed toward a sitting U.S. President, and the entirety of the radical left is jockeying for position.

Even the has-beens are getting in on the act recently, as racially-insensitive “comedian” George Lopez has thrown his hat into the anti-Trump ring.  The once-popular stand-up comedian and actor was recently sent packing during his set after launching into an offensive diatribe aimed at dissing The Donald.

“Comic George Lopez was booed off stage at a gala for juvenile diabetes in Denver last week, over an anti-Donald Trump routine that fell flat with the crowd.

“We’re told the flap began when Trump backer and Liberty Media CEO Greg Maffei donated $250,000 but requested that Lopez cool it with the anti-Trump jokes at the Carousel Ball.

“An attendee at the event — where tables sold from $5,000 to $100,000 to benefit the Barbara Davis Center for Diabetes — commented on a YouTube video that ‘George was asked nicely to stop making Trump jokes by a man in front row [Maffei] who just donated $250K.’ But ‘George doesn’t, continues. Gets booed.’

“We’re told that Lopez responded to Maffei, ‘Thank you for changing my opinion on old white men, but it doesn’t change the way I feel about orange men.’

“Trying to recover and sensing the audience turn, Lopez said, ‘Listen, it’s about the kids . . . I apologize for bringing politics to an event. This is America — it still is. So I apologize to your white privilege.’”

What Lopez and others are constantly forgetting is that Donald Trump was elected President by a vast conservative majority in this nation of tradition, and no amount of Hollywood echo chambers and liberal lunacy is going to change that.

The entire “resistance” movement has been well embodied in stunts such as Lopez’s:  Not only did the comedian use a charity event to push his own race-baiting leftist views on wealthy donors, but Lopez himself chose to believe that he was above the law, so to speak when it came to criticism.  If this doesn’t scream “liberal privilege”, nothing does.