Sen. Blackburn, "Maybe we're going to remember you three as the three that broke the military." 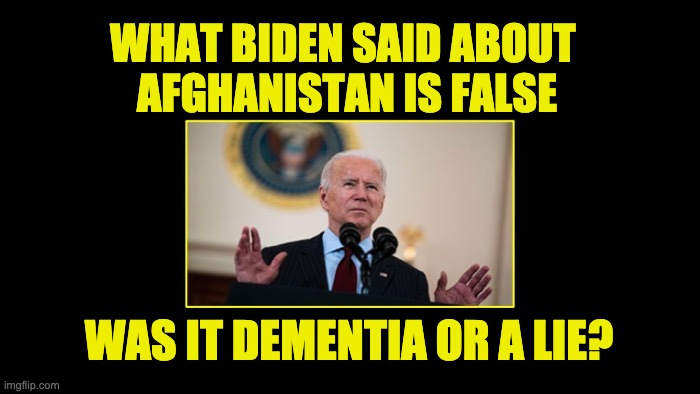 Generals Austin, Milley, and McKensie testified to the Senate Armed Services Committee Tuesday. Milley and McKensie’s testimony could be summed up with the phrase Biden lied, Americans were left behind and died. Each of the Generals said they recommended leaving behind a residual military force. As Secretary of Defense and part of the Administration, General Austin was not as forthcoming.  Generals testified Biden lied.

The US military withdrawal allowed the Taliban to simply conquer the nation in eleven days and then hand the US a figurative eviction notice that would force all of our military assets to be gone by August 31st.

Despite our vast military capabilities, it was well understood that it would be impossible to get every American out of Afghanistan in that time period and if the remaining 2,500 troops were pulled out the Taliban would take over.  The nation’s top strategic minds explicitly told that to President Biden. That’s what was testified to Tuesday in a Senate hearing room.

McKenzie and Milley both testified that they recommended maintaining a presence of U.S. troops in Afghanistan.

And he wasn’t the only one:

Milley was also pressed on the matter, saying that while he would not share his “personal” recommendations made to the president, his assessment was, “back in the fall of 2020, and remained consistent throughout, that we should keep a steady state of 2,500 and it could bounce up to 3,500, maybe, something like that, in order to move toward a negotiated solution.”

But is contrary to what America heard from the White House:

Biden and his White House team have repeatedly said that no military leaders advised him to leave a small military presence behind. In August, Biden told ABC News’ in-house Democratic Party operative George Stephanopoulos that “no one” recommended a 2,500 troop presence that he could “recall.”

FLASHBACK: In August, Biden insisted that “no, no one” advised against his withdrawal timeline.

Today under oath, Generals Milley & McKenzie confirmed they recommended against Biden’s withdrawal timeline and warned him about the impending collapse of the Afghan government. pic.twitter.com/HejzUb5FIf

On Tuesday, we learned that either his dementia is damaging his memory or that he was lying.

Austin was asked whether the president received the personal recommendations from his top military advisers like Milley and McKenzie.

Last month, Joe Biden claimed that no military leader advised him to leave a small troop presence in Afghanistan.

Today, General Milley and General McKenzie both confirmed their recommendation that 2,500 U.S. troops remain in Afghanistan.

The White House attempted to deflect from the testimony by issuing a tweet regarding the issue, stating that their belief that any remaining troops would have escalated the trouble in Kabul. And for those who believe that WH tweet, I have a bridge in Brooklyn to sell them.

"Hundreds of Americans, not just Americans generally, civilians you left behind," @HawleyMO is fed up with the Biden administration and military leaders lying. pic.twitter.com/MNYGADMP9p

So Biden lied about what the military told him, ignored their advice, and that he left Americans behind. What does the White House say that we should believe?

Neither Biden nor the leaders of our military, per Senator Blackburn:

.@MarshaBlackburn: "Maybe we're going to remember you three as the three that broke the military." pic.twitter.com/w0RxJjc5qp

Senator Hawley closed the hearings by telling General Milley and Secretary Austin that they should resign.

“I think this mission was a catastrophe. I think there’s no other way to say it. There has to be accountability,” he said.

Sadly accountability is as likely to happen as the Biden Administration telling the truth.