Book Didn't Call It Treason, But The Action Described Were Treasonous 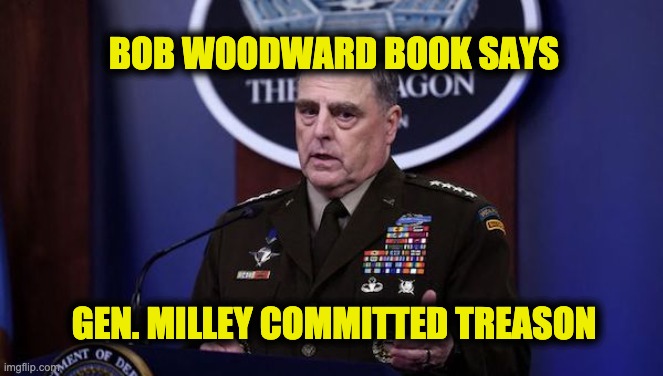 According to Fox News, the new book, “Peril,” reportedly says Gen. Milley “made two phone calls to Chinese officials in fear that Trump would create conflict with the communist nation,” according to Fox News. The calls were reported to his Chinese counterpart, Gen. Li Zuocheng of the People’s Liberation Army.

Woodward, of Watergate fame, is now associate editor at the Washington Post. Costa is the Post’s national political reporter.

The media has jumped on this story, with each review suggesting the former president might seriously have been contemplating some sort of attack. A review at Forbes says Milley “placed roadblocks in front of…Trump’s ability to launch a nuclear strike as top officials voiced concerns about his mental health after the January 6 attack on the Capitol.”

The CNN report quotes an alleged Milley remark to members of his senior staff.

“You never know what a president’s trigger point is,” Milley allegedly told his subordinates, according to the book.

Months after leaving office, Donald Trump is still a whipping boy for the political left and the media, it appears. He’s the bogeyman raised by Joe Biden during a swing into California Monday in support of embattled Democrat Gov. Gavin Newsom, whose most prominent challenger is Republican radio commentator Larry Elder. Biden told a crowd, instead of just attacking Elder, “you either keep Gavin Newsom as your governor, or you’ll get Donald Trump,” according to CBS News.

According to a preview found at Amazon.com, “Woodward and Costa interviewed more than 200 people at the center of the turmoil, resulting in more than 6,000 pages of transcripts—and a spellbinding and definitive portrait of a nation on the brink…This classic study of Washington takes readers deep inside the Trump White House, the Biden White House, the 2020 campaign, and the Pentagon and Congress, with vivid, eyewitness accounts of what really happened.”