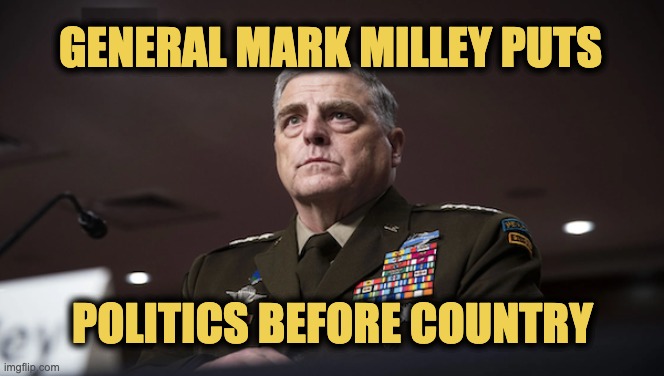 Chairman of the Joint Chiefs of Staff General Mark Milley believes that former President Donald Trump and his supporters are Nazis. And that during Trump’s final days in office, Milley claims he was afraid that Trump was planning a military coup. This is just the latest and worst example of Milley putting politics before the needs of the military or the American people. Remember when he apologized for walking with President Donald Trump across the park at Lafayette Square to the burned-out St. John’s Episcopal Church? Or, more recently, he angrily defended the military’s teaching of the Marxist critical race theory to new recruits. Milley pushes leftist politics at every opportunity.

This latest example of Milley’s deep state politics is not only false and hyperbolic but demonstrates a lack of understanding of history and, quite frankly, a lack of common sense. It is frightening to realize that a politically crazed Mark Milley is the top military man in a country with so many brilliant and honorable military heroes.

To the Chairman of the Joint Chiefs of Staff, the 73 million people that voted for Donald Trump in 2020 are not just “deplorable” — they’re all-out Nazis. It goes without saying that that particular view is not only disgusting but absolutely insane.

His latest stunt was quoted in a book written by Washington Post “reporters” and previewed on CNN. Neither outlet is an honest source for Donald Trump coverage.

Milley’s reported comments were excerpted by CNN which previewed next week’s release of the book I Alone Can Fix It: Donald J. Trump’s Catastrophic Final Year. The book was written by Washington Post reporters Philip Rucker and Carol Leonnig.

According to excerpts, Milley was so concerned that Trump or his allies might try to use the military to remain in power that he and other top officials strategized about how they might block him – even hatching a plan to resign, one by one.

‘This is a Reichstag moment,’ Milley reportedly told aides. ‘The gospel of the Führer.’

The left has been pushing a comparison of the 45th President to Hitler ever since Donald J. Trump went down that Trump Towers escalator in 2015 announcing his run for President.  They use those comparisons because it meets two of their leftist goals: de-humanizing Donald Trump, and making the murder of six million Jews and the torture of countless others look less horrible.

On his Thursday show, Tucker Carlson unloaded on Milley’s crazed ramblings and questioned if someone, who clearly despises half of the country and is willing to vilify them as Nazis simply for having different political views, should wield the power of being the top military person in the United States.

Shown in the video below, Tucker blasts Milley and the biased mainstream media that think that the “woke” General is a “true patriot.” But the truth is that our military is not allowed to publicly play in the partisan political minefield. Instead of being a true patriot, the General has disgraced the Uniform he wears.

Instead of spending even more time in his own ideological bubble by immersing himself in books by racial grifters like Kendi and DiAngelo, General Milley would be much better off reading Darryl Cooper’s epic thread on Twitter that explains the reason why Trump supporters had questions about the 2020 election.

As Tucker explained, Milley considers himself to be a historian and an intellectual. But his Nazi comparison proves him to have a lack of historical knowledge or mental capacity.

At the very least, General Milley’s Hitler reference shows his lack of understanding of the Holocaust.  The hyperbolic nature of his political statement cheapens the memory of the actual horrors that millions of people, including the murder of six million Jews (1.5 million of them were children), endured.

While thankfully, my part of the family came here to the greatest country on Earth, other members of my extended family when to Europe when they escaped from Russia.

Many of those European relatives had tattoos put on their arms by Hitler and his Nazis. Does General Milley really believe that Trump or his supporters put tattoos of numbers on people’s arms?

I never met some of my family because the Nazis killed them, then buried them in mass graves or cremated their bodies. When the General compared Trump and his supporters to Hitler, was he saying they did something like that?  I don’t think so because the Washington Post or CNN would have covered the story if they had. They would have loved to cover it as it would have saved them loads of time. It would be one less news story about Trump they would have to invent.

The Nazis conducted horrible and painful medical experimentation on humans. Perhaps the most well-known of which was Josef Mengele’s experiments on twins and other victims at Auschwitz. He experimented on over 1,500 pairs of twins and other Jews and Gypsies, injecting dye into their eyes, blinding them, or chloroform into their hearts, killing them. He sewed twins together, trying to create conjoined twins, forced them into freezing water (like the picture below), and did other experiments too horrible to repeat.

Did Trump or his followers conduct medical experiments like that? Don’t ask Dr. Fauci because he hasn’t gotten anything correct in years.

After the Nazis gassed their victims, and before they tossed them in crematoria, they collected their hair, their clothes, glasses, gold teeth, and even artificial limbs to be used by the Reich.

Perhaps I was watching “Battlebots” or “Family Feud” instead of the news the day that Donald Trump or his followers killed people and recycled what was usable. If I didn’t miss that story, well… then neither Trump nor his followers are Nazis, and Milley made an imbecilic analogy.

And who is the head of the military….. hmm, let me think.  Oh, wait, I know, General Mark Milley.  He said he suspected what Trump was planning, but neither himself nor any of his officers claimed that Trump spoke to them about a coup.
v
So if Trump never spoke to military officers about a coup, Milley could have only gotten the idea from one source. The Stupid Fairy must have flown over his home and sprinkled stupid dust all over him.
c
Like most of the left, General Mark Milley is willing to sell out his soul and the Truth to trash the 45th president of America. And he gets a liberal bonus if he can do it while desensitizing the world about the horrors of the Nazi Holocaust of the Jewish people.

But what makes his political pronouncements more horrible is that our military leaders are supposed to be above politics. The American Military is supposed to be subject to the orders of the politicians, not the other way around. They are allowed to have political opinions, but they are not supposed to politicize the military or invent possible military actions.

If Trump tried to stage a coup, I would hope that he would be stopped by our military heroes. But Trump didn’t try to stage a coup even Milley said he was just worried that it was a possibility. Therefore the only purpose of the General’s statement was to prove his loyalty to the Trump-hating leftists and throw one last political slander at the 45th President.

But the head of the American military is not supposed to get down into the political weeds. Tucker Carlson was correct-General Mark Milley should resign or be fired. But that will never happen as long as Dementia Joe is President.