The Garland DOJ- Most Dangerous Department of “Justice” in Our History 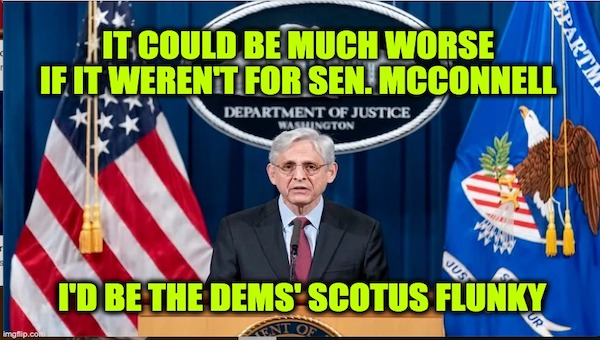 There was a good reason why Senate Republicans blocked Merrick Garland from the Supreme Court at the end of Obama’s term in 2016. We can see it now: the Garland DOJ is our history’s most dangerous threat to the United States. The fact that Biden confirmed him as Attorney General is causing repercussions across the board. Never before has the Attorney General bashed the Supreme Court for removing a “right” that didn’t exist in the first place in Roe v Wade. Never before has an AG openly disagreed with a ruling that restored the right to bear arms taken away by New York.

Garland’s DOJ is a TERRIFYING threat to the republic. Are Republican leaders too scared of the politicized DOJ to speak out against what is going on? https://t.co/pqOVZYPEx8

First, the Constitution does not now nor has it ever been involved in “reproductive rights.” That term is another word for abortion, the murder of unborn children. The wrongful decision by the Supreme Court in 1973 took that issue out of the hands of the states and put out a blanket rule for the Federal Government. The hysteria of the left over the decision yesterday reveals a complete lack of understanding of even the reason for the Constitution. The Garland DOJ is following along, saying they will push against it.

“The Justice Department will work tirelessly to protect and advance reproductive freedom,” he said, adding that the DOJ will “continue to protect healthcare providers and individuals seeking reproductive health services in states where those services remain legal.” He also said that the DOJ “strongly supports efforts by Congress to codify Americans’ reproductive rights, which it retains the authority to do.”

“We also support other legislative efforts to ensure access to comprehensive reproductive services,” he continued, later adding that the department “will use every tool at our disposal to protect reproductive freedom.”

“And we will not waver from this Department’s founding responsibility to protect the civil rights of all Americans,” Garland added.

Then there was the ruling that struck down New York’s concealed carry law:
DOJ (The Blaze):

We respectfully disagree with the Court’s conclusion that the Second Amendment forbids New York’s reasonable requirement that individuals seeking to carry a concealed handgun must show that they need to do so for self-defense.

The Department of Justice remains committed to saving innocent lives by enforcing and defending federal firearms laws, partnering with state, local and tribal authorities and using all legally available tools to tackle the epidemic of gun violence plaguing our communities.

The DOJ “respectfully disagrees” with a 6-3 #SCOTUS decision? If there’s a precedent for this, pointers please. Let me paraphrase: “You can take the Constitution and that separation of powers nonsense and jump off a cliff.” Good thing rule of law matters to Democrats so much. https://t.co/ctlFV0iWEu

Whose “civil rights” are they protecting? Certainly not those of children, women, or those with firearms for self-defense. The Supreme Court is the final rule that says yea or nay to laws and situations that violate the Constitution. They don’t always do it right, they sometimes miss the mark, but they are the final rule. The Garland DOJ “disagree” with their rulings and state that they will somehow get around them is hugely concerning. The Garland DOJ is the most dangerous in history – they are weaponized against parents, ordinary people, and those with which this administration disagrees.

Here’s what to look for: The Biden administration will attempt to pack the Supreme Court. They have proven themselves to be lawless and will do whatever it takes to make an attempt to “codify” abortion (a bill that failed in Congress previously). Adding 3 more spaces for the court would make the judicial branch even in number, which raises the potential for problems in the court. It was tried in the past and was a disaster, so the court reverted to 9 justices. Democrats and the Garland DOJ will do whatever they can to put obstacles to these rulings. They will crack down on every citizen for any reason. Watch for it. In your celebrations, remember we are up against a crafty, evil enemy… be prepared.