Leftists Hate on Free Speech Platforms GAB and Parler: Where is this Going? 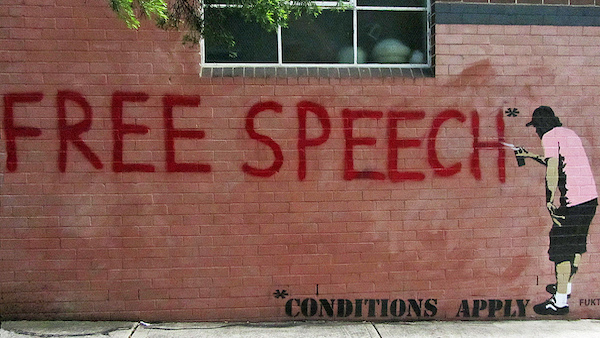 The first shots across the bow of two free speech platforms GAB and Parler, are coming from CNN and VICE. They are not just the ravings of liberals who can’t stand the idea of free speech – there may be something more sinister in store if they start to do more than just try to paint members of alternative social media as terrorists. Which is dangerous in and of itself.

Parler – a French word that means “to speak.”

John Matze, Jared Thomson, and Rebekah Mercer, a Republican donor, founded Parler in 2018. Matze is its CEO, and Thomson is the CTO. Dan Bongino reportedly holds an undisclosed stake in the company. And CNN is terrified that Conservatives are only going to get their news from the platform.

CNN’s Brian Stelter and Pamela Brown think that Parler (and other free speech platforms) are a threat to Democracy. (But fake news CNN is not?) He calls conservatives moving to other platforms a “bunker mentality,” and Brown calls it an “echo chamber of lies.”

.@brianstelter: "Conservatives are saying they're leaving Twitter and Facebook going off to Parler because they believe Parler is a safer space for them.

What we're seeing is even more of a bunker mentality in right-wing media."@PamelaBrownCNN: "It's a threat to democracy." pic.twitter.com/0hNiJi52Mk

Folks, PLEASE be aware that this is not just sour grapes on the part of fake news CNN at the prospect of losing even more viewers.  This is an agenda. The paintbrush they are using is directly intended to denigrate Conservatives and Trump supporters to a place of terrorism and threats to the US because they departed from Facebook, Twitter, etc.

Given their “lists” of Trump supporters being accumulated, this narrative is packed with lies designed to harm conservatives, as we previously reported. And yes, we should continue to leave Facebook – it’s not a place where ideas can be freely shared. Those of us who have been severely censored can testify to their hatred of any view, not their own.

And another left-wing publication, VICE, has taken aim at GAB and has been doing so since 2019.

GAB – Andrew Torba is the CEO of the GAB platform. He is openly Christian, definitely Conservative, and well balanced in his postings. The new Chief Technical Officer is Fosco Marotto, a former Facebook software engineer.  GAB does not accept terrorists or white supremacists on its platform, but VICE claimed that the social media company is a haven for them. Facebook has taken heat for many terrorists, even ISIS, other terror groups, and anti-semite Louis Farrakhan, posting things on their platform. Vice seems to think it’s unique to GAB.  It’s not.

“This is not simply a matter of providing a place where people can express controversial opinions: Two neo-Nazi groups, the Base and Atomwaffen Division, that are under an intense FBI crackdown and are connected to terrorist activities, have actively used Gab as a recruitment platform…

Before opening fire and killing 11 people at a synagogue in Pittsburgh, domestic terrorist Robert Bowers used his Gab profile to post something of a manifesto to other users: “I can’t sit by and watch my people get slaughtered. Screw your optics, I’m going in.” The association with Bowers and the shooting led to a slew of companies cutting ties with Gab, but it’s again gaining momentum as the recent backlash against mainstream social media services grows.” Vice

Bowers did not have “ties to Gab.” GAB vigorously responded to Ben Maruch’s article in Vice. Andrew Torba stated in a blog posting on Friday:

“…There is one thing VICE mentioned in this hit piece that is very true. There are many patriots inside of Big Tech companies in very powerful positions. They love Gab. They hate what is happening to Silicon Valley products. They see the writing on the wall and are now applying to work at Gab and other alt-tech companies in droves…

…Fed posting (a poster who openly calls for violence against others or encourages one to break the law in some manner) is not and has never been allowed on Gab. We’ve also worked closely with law enforcement to make sure this activity is not happening on Gab. You can read more about our data disclosure policies here.

Gab is a community of peace. These false media narratives have no solid ground to stand on. We have no tolerance for illegal activity and threats of violence and have always made that very clear.”

Several good strong patriots in high-level positions at Facebook have jumped ship in the face of their censorship of Conservatives. But this narrative by the media consists of a paintbrush that is clumped with hatred and lies.

Check out this mention on Wikipedia – the internet encyclopedia that can be altered by anyone and everyone:

“Gab is an English-language alt-tech social networking service known for its far-right userbase. The site has been widely described as a haven for extremists including neo-Nazis, white supremacists, and the alt-right, and has attracted users and groups who have been banned from other social networks. Gab states that it promotes free speech and individual liberty, although these statements have been criticized as being a shield for its alt-right ecosystem. Antisemitism is a prominent part of the site’s content, and the company itself has engaged in antisemitic commentary on Twitter.  Researchers have written that Gab has been “repeatedly linked to radicalization leading to real-world violent events”.”

Understand that this is not just a whiney narrative. This is an agenda. Their purpose to marginalize, defame, and attack Conservatives is the REAL “threat to democracy.” Especially since the United States has never been a “democracy.” It’s a representative Republic and has always been so.

What could happen with this propaganda? Google, Facebook, and Twitter have engineers that constantly create algorithms. Can they create hacks to destroy these platforms? Sure. My advice to all the new free speech platforms is to armor up. Protect yourselves. Make your platforms impervious to intrusion.

My suggestion to conservative social media users is to join GAB, Parler, and as many of the other alternate platforms as possible. It’s still early–figure out which ones you like best and use them. The more people leave Twitter and Facebook and help develop alternate sites by joining, the more conservatives will be allowed to express themselves on social media.