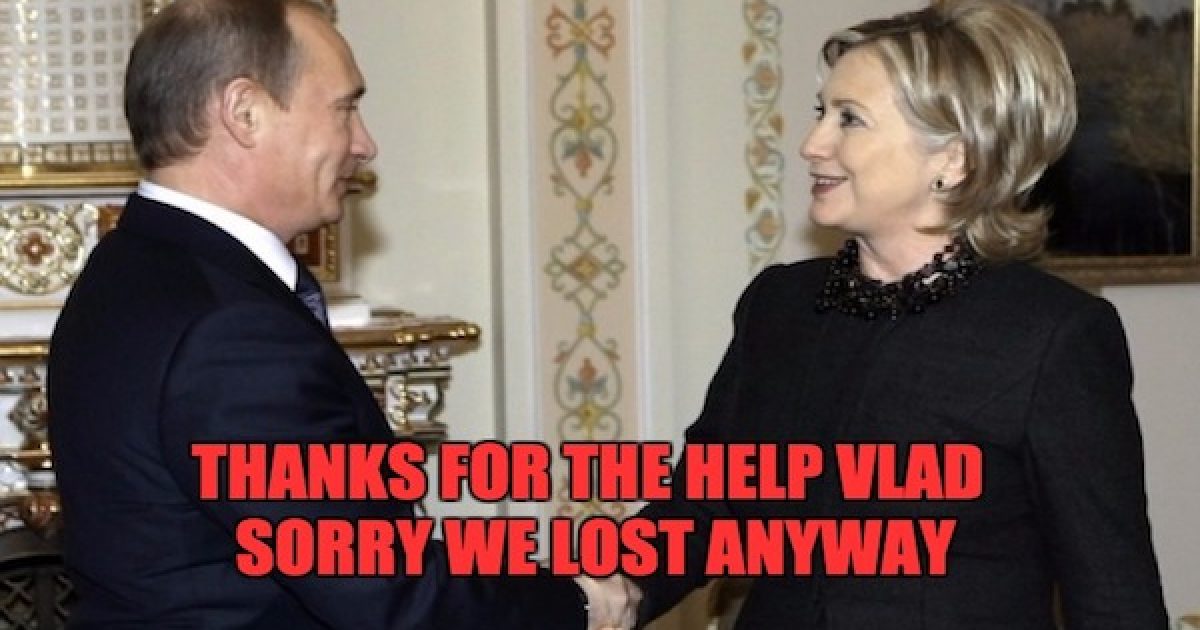 The unsealed court documents regarding Fusion GPS reveal that the firm behind the bogus Trump Dossier, Fusion GPS, was paid $523K by a Russian businessman convicted of tax fraud and money laundering, and whose lawyer, Natalia Veselnitskaya, was the Russian attorney who participated in the infamous June 2016 meeting at Trump Tower with Donald Trump Jr. and others in the Trump campaign. Or to put it another way, Fusion GPS, Team Hillary, and the Russians were behind two of the key items being used to sell the Trump/Russia conspiracy fantasy.

In October we learned that via Marc Elias and his law firm, Perkins Coie, Hillary Clinton and the Democratic National Committee paid for a large chunk of the Trump Dossier,  a fraudulent 35-page document leaked to CNN and published in full by BuzzFeed a few weeks before the Inauguration. None of it was ever proven to be true, but when leaked the document was said to have “revealed” ties between Team Trump and Russia, as well as some unsavory activity between the future president and Russian prostitutes.  Of course, anyone who has researched President Trump would have known that he’s a bit of a germaphobe—just based on that alone, one would realize that Trump would have never done some of the unsavory activity described in the dossier. According to reports, the dossier was the origin of the Russia collusion myth and what the FBI used in a FISA court to get a warrant to wiretap the Trump campaign.

He [Simpson] worked closely with Natalia Veselnitskaya, the Russian lawyer who also showed up at the infamous Trump Tower meeting held on June 9, 2016.

Simpson’s research ended up in the Trump Tower meeting in the form of a four-page memo carried by Veselnitskaya. She also shared Simpson’s work with Yuri Chaika, the prosecutor general of Russia.

Simpson told the House Intelligence Committee earlier this week that he did not know that Veselnitskaya provided the Browder information to Chaika or to Donald Trump Jr., the Trump campaign’s point-man in the Trump Tower meeting.

The Daily Caller is reporting Fusion GPS bank records unsealed Tuesday reveal DNC law firm Perkins Coie paid Fusion a total of $1,024,408 in 2016 for opposition research on Donald Trump – including the dossier. Also, law firm Baker Hostelter paid Fusion $523,651 between March and October 2016 on behalf of a company owned by Russian businessman and money launderer Denis Katsyv to research Bill Browder, the London banker who helped push through the Magnitsky Act named for deceased Russian lawyer Sergei Magnitsky, who Browder hired to investigate Russian corruption, and because he found corruption was arrested by Putin and killed in a Russian prison.

The Maginitsky Act (officially the Sergei Magnitsky Rule of Law Accountability Act) imposed sanctions on Russia and banned those Russian officials believed to be involved in Magnitsky’s death from entering the United States. Russia retaliated by halting an adoption program for US foster parents.

Now to tie that altogether, Natalia Veselnitskaya the attorney who went to Trump Tower was originally banned from the US under the Magnitsky Act was given a special exemption by Obama’s DOJ, led by Loretta Lynch whose tarmac meeting with Bill Clinton and her insistence on calling the Hillary investigation a “matter’ has raised suspicions regarding her independence in running the Hillary Clinton emails investigation.

The document shows that the committee sought records related to “five Fusion payments to research and Russia expert [name redacted], and production of three additional payments.”

The committee also seeks records “related to Fusion’s payments to journalists who have reported on Russia issues relevant to its investigation.”

In a memo filed Tuesday, lawyers for the House panel said they are seeking transactions related to nine payments made to “three individual journalists…each of whom have reported on and/or been quoted in articles regarding topics related to the Committee’s investigation, some of which were published as recently as October 2017.”

The names of the journalists are redacted in the filing.

The court filings are not absolute proof of anything, but when combined with the Uranium One story, it is a strong indication that if any campaign was colluding with the Russians it was Team Clinton, and there is the need for an independent investigation of Hillary Clinton’s relationship with the Russians.