In July 2004, then-Israeli Prime Minister Ariel Sharon caused a bit of an international incident when he told French Jews to move to Israel immediately to escape Antisemitism.  It was at a meeting of the American Jewish Association in Jerusalem, that he said Jews around the world should relocate to Israel as early as possible. But for those living in France, Sharon added, moving was a “must” because of rising violence against Jews there. He was correct, and it’s still happening.

On Saturday, June 13th, anti-racism protesters in Paris shouted “Dirty Jews” at a group of counter-protesters—not because they were Jewish but because it was the most repulsive label Parisians could think of to call someone.

For their version of the U.S. Black Lives Matter rallies, French protesters gathered in the city to protest the death of Adama Traoré, a 24-year-old black man who died in 2016 in police custody near Paris. The anger about Traoré’s death was incited again by the news of the George Floyd murder.

According to Valeurs (and Google Translate), tensions were already running high because the police tried to block the unsanctioned march from taking place. Then a counter-protest group Génération Identitaire (Identity Generation) dropped a banner from a nearby building that read “Justice pour les victimes du racisme anti-blancs,” which translates to “Justice for the victims of anti-white racism.”

Upset with the banner, the anti-racist protesters reacted by screaming bigotry, Sales Juifs, Dirty Jews! The group that hung the banner is not a Jewish group, the subject of the protesters screams just displays the low standing the Jewish people have in French society.

The police tweeted that “Dirty Jews” chanted by the demonstrators. The Prefect of Police reports these anti-Semitic remarks to the Justice Dept.

Gee, didn’t the police know all had to do is put on army uniforms and the protesters who were spewing bigotry would have followed French tradition and surrendered?

In addition, participants allegedly accused Israel of being ” the laboratory of police violence “. The Parisian procession was still motionless in the middle of the afternoon. The police refused to lift the roadblock and recalled the ban on gatherings of more than 10 people. ”  We will not move from here for now, ” she said to the organizers of the march against police violence and racism.

Crif, the umbrella organization for French Jewry, denounced the incident, saying “there cannot be a fight against racism which directly or indirectly tolerates antisemitism in its ranks.”

The organization also noted the response of hard-left French member of parliament Jean-Luc Mélenchon, who tried to cast doubt on the veracity of the incident, accusing the police on Twitter of “peddling antisemitic gossip” regarding the police report to the French courts.

“Perhaps Jean-Luc Mélenchon is deaf and blind once again when faced with antisemitism which comes from his ranks?” Crif asked.

Perhaps its Crif that’s deaf and blind. They live in France, a hotbed of Antisemitism. A recent AJC study in France revealed that more than a third of French Jews feel threatened because of their religious beliefs. 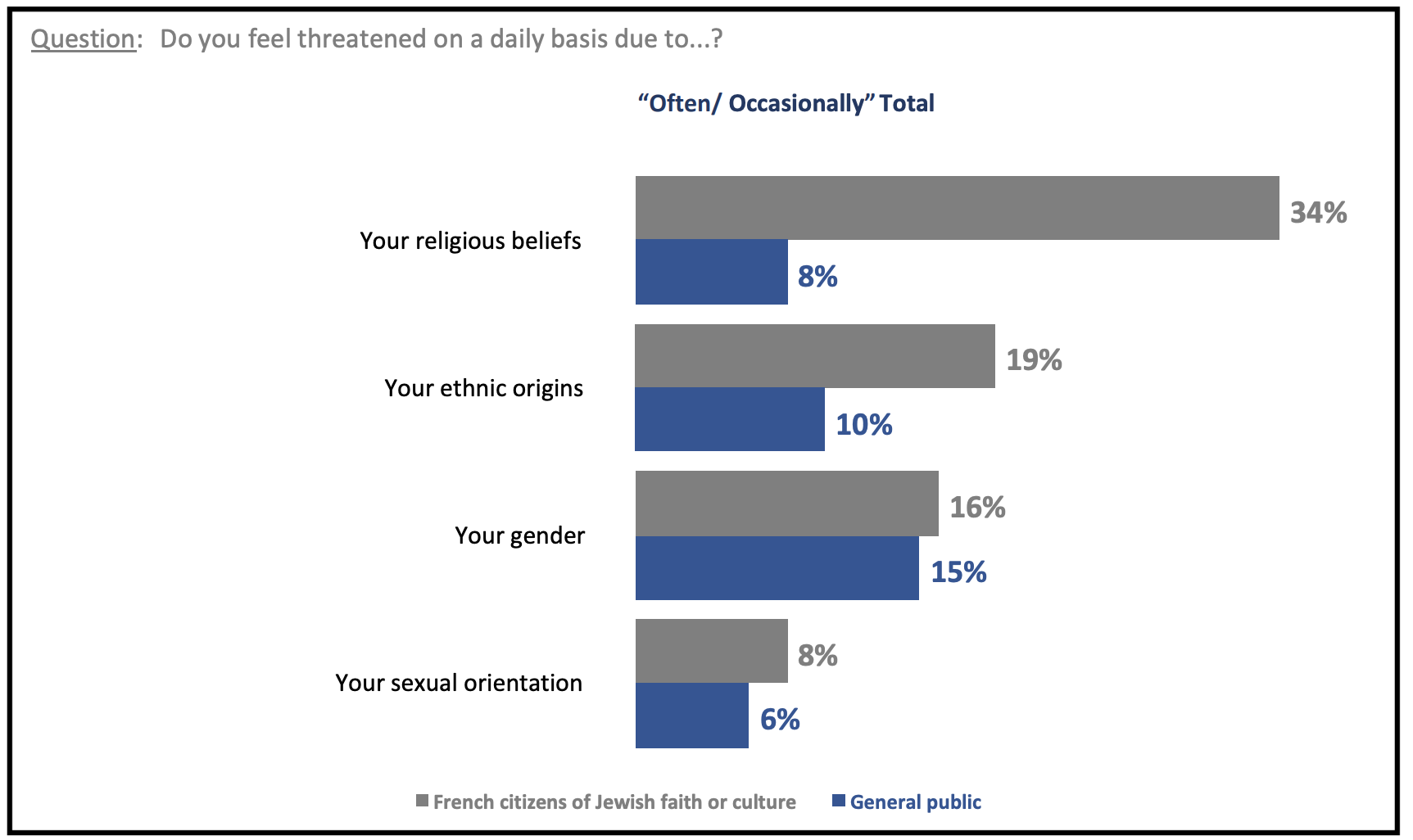 A November 2019 National Geographic report about Jews in France warned about French Antisemitism:

From the expulsion of Jews in 1306 to the Dreyfus Affair of 1894 to the Vichy government’s cooperation with the Nazi extermination of 75,000 French Jews, France has a long history of anti-Semitism. Today hate comes from both the far right and far left. Some Yellow Vest protesters have accosted prominent French Jews and called President Macron “a whore of the Jews.”

(…) France’s interior minister has warned that anti-Jewish sentiment is “spreading like poison.” President Emmanuel Macron declared that anti-Semitism was at its highest levels since World War II. Amidst a string of attacks, Prime Minister Edouard Philippe admitted that anti-Semitism is “deeply rooted in French society.”

Sixteen years ago, the late Ariel Sharon told French Jews to save themselves and move to Israel. His words still ring true. They feel threatened. And when a French group wants to call their opposition names, they conjure up the most offensive term a French citizen can use against a rival, Sales Juifs, Dirty Jews!  They don’t use the term because their rivals are Jewish, but because to the French, a Jew is an ugly thing.

Its time that French Jews heed Ariel Sharon’s warning and leave their anti-Semitic country before its too late.