With The Raid On Entebbe On July 4, 1976 Israel Demonstrated That Freedom Is Still Worth Fighting For 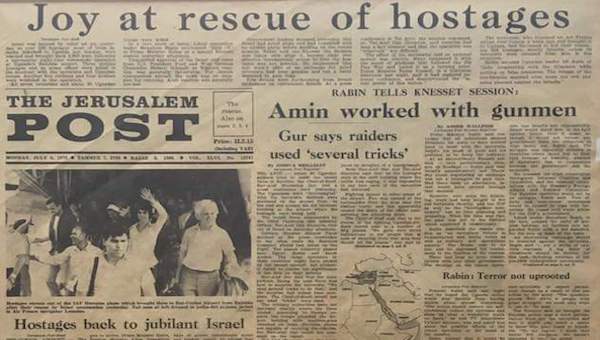 It wasn’t supposed to be the big story of the day, July 4, 1976, was the two hundredth anniversary of the United States, the nation which became a beacon of freedom for the entire world. More than anything else that happened at any gala celebration of America’s 200th anniversary, Israel’s raid on Entebbe reminded the world of the real lesson of the American Revolution, freedom’s worth fighting for.

America needed a big celebration as we were recovering from the scandal which forced a president to resign for the first and (hopefully) only time in its history.

Three years earlier, Israel came the closest it had ever come to being destroyed when their Prime Minister obeyed Henry Kissinger’s orders and did not strike first despite their few hours notice they were about to be attacked on Yom Kippur. One year before the raid, United Nations passed a resolution saying that Zionism, the movement declaring that Jews have the right to a homeland, was the same as racism. 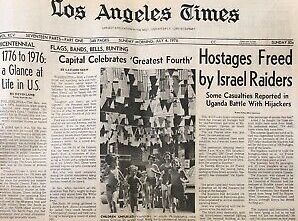 On America’s 200th birthday, Israel and the United States each needed some good news to boost morale. America got its good news from an unexpected source, Israel. The Jewish State boosted its own morale, the morale of America and much of the Western world (except for cowardly France), with a daring raid.

On June 27, 1976, Air France Flight 139, carrying 248 passengers and a crew of twelve, took off from Athens, heading for Paris. Soon after the 12:30 p.m. takeoff, the flight was hijacked by two Palestinians from the Popular Front for the Liberation of Palestine and members of the German “Revolutionary Cells (RZ)” (Wilfried Böse and Brigitte Kuhlmann). The terrorists commandeered the flight, diverting it to Benghazi, Libya. The plane refueled and left Benghazi. And at 3:15, it arrived at Entebbe Airport in Uganda.

At Entebbe, the four hijackers were joined by three “friends” supported by the pro-Palestinian forces of Uganda’s despotic president, Idi Amin. The hijackers were led by the German, Böse. They demanded the release of 40 Palestinian terrorists held in Israel and 13 other detainees imprisoned in Kenya, France, Switzerland, and Germany–and if these demands were not met, they threatened to begin killing hostages on July 1, 1976. Eventually, that deadline was extended to July 4th. 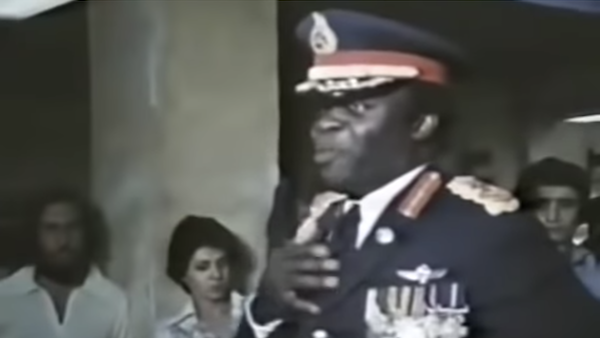 The hijackers were holding the passengers hostage in the transit hall of Entebbe Airport.  They released all the hostages except for Israelis and Jews, whom they threatened to kill if Israel did not comply with their demands.

Air France, which was owned by the French Govt. in 1976, disagreed with the crew that it was the right thing to do. Just like their actions show today, France didn’t care about Jewish lives.

A total of 83 Israeli and/or Jewish hostages remained, as well as 20 others, most of whom included the crew of the Air France plane.

Early in the morning of July 4th came one of the most daring, spectacular rescues of modern times. For nearly a week, pro-Palestinian skyjackers had the hostages—mostly Israeli—at Uganda’s Entebbe Airport. Now, with time rapidly slipping away and the deadline merely hours off, death seemed ever more certain for the terrified captives. 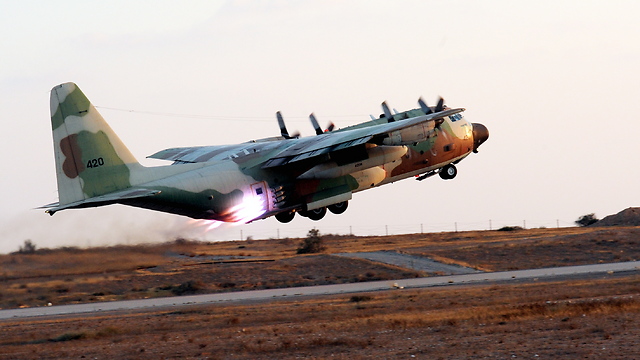 The entire assault lasted less than 30 minutes. All six of the hijackers were killed. Yonatan Netanyahu, the former Prime Minister’s older brother, and team leader, was the only Israeli commando killed during the operation. Five additional soldiers were wounded (one of the five was paralyzed), three Israeli hostages were killed during the initial exchange of fire, and approximately 10 were wounded.

One more passenger died. Seventy-five-year-old Dora Bloch became ill on the plane and was transferred to Mulago Hospital in Uganda after the Air France flight.  She was not rescued during the Entebbe raid because of the hospitalization and was killed as she laid in the hospital.

“She had been seen by a consultant at Mulago Hospital last Sunday long after the Israeli commandos had come and gone. Since then she had been not seen anywhere. Our information was that she had been dragged from her bed at hospital screaming. Though she had been living in Israel, she was a British national and our responsibility. “

Her disappearance led to Britain cutting diplomatic ties with Uganda. Three years later, her body was discovered at a sugar plantation near the Ugandan capital. In February 2007, declassified British documents confirmed that she was killed on the order of Idi Amin. 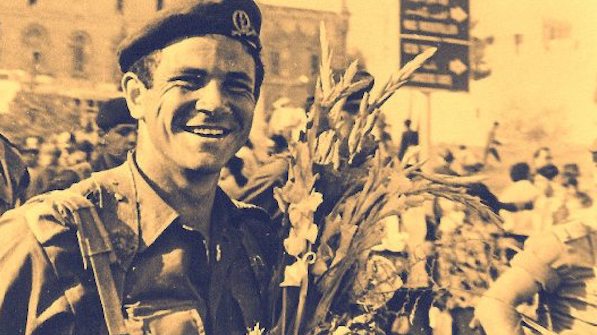 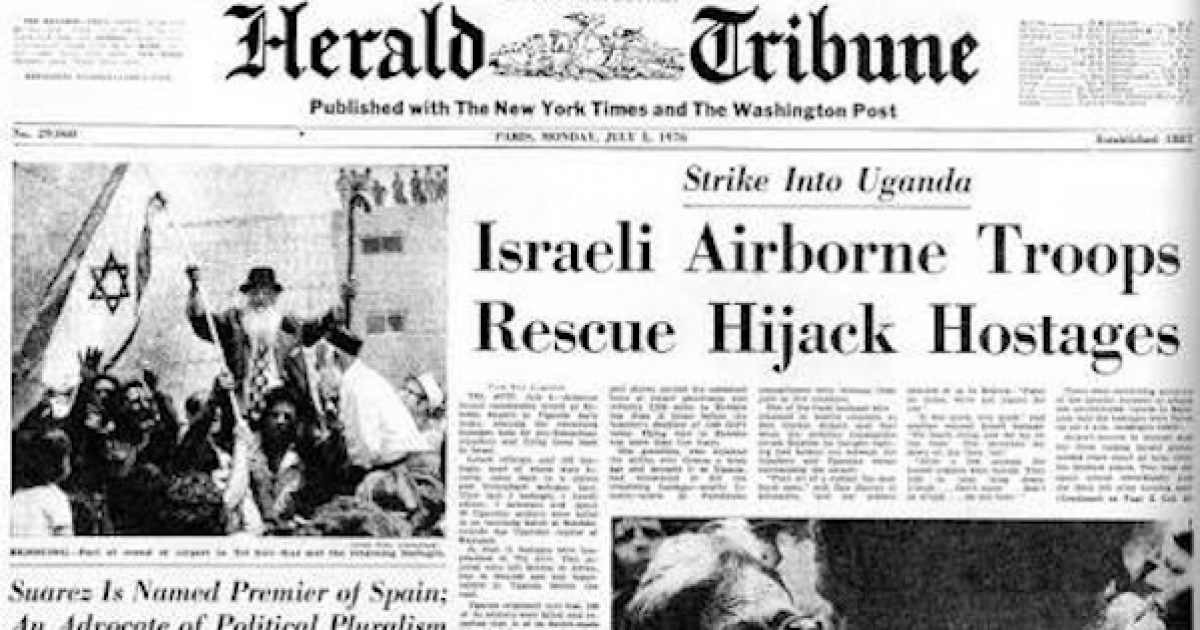 The decision to send Israeli troops into Uganda had been an agonizing one, with defense minister Shimon Peres pushing for a military option and Rabin, the former general, aware that suggesting military plans for a miracle rescue authorizing them were two entirely different matters. But in the end, they displayed courage as a failed operation would doom their political careers forever.

IDF military archives kept hidden until last year- 39 years after the mission and published in the Times of Israel give us an idea of the behind-the-scenes discussions about approving the mission.

The government of Uganda later convened a session of the United Nations Security Council to seek official condemnation of the Israeli raid as a violation of Ugandan sovereignty.  Former Nazi, UN Secretary-General Kurt Waldheim told the Council that the raid was “a serious violation of the sovereignty of a Member State of the United Nations. The Security Council ultimately declined to pass any resolution on the matter, which was almost as big of a miracle as the raid’s success. 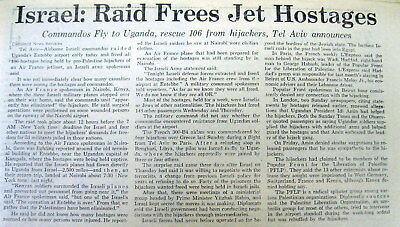 In his address to the Security Council, the Israeli ambassador to the United Nations, Chaim Herzog, said:

For refusing to depart and leave some of his passengers alone when given leave to do so by the hijackers, Captain Bacos was reprimanded by his superiors at French government-owned Air France (gotta love the French) and suspended from duty for a period.