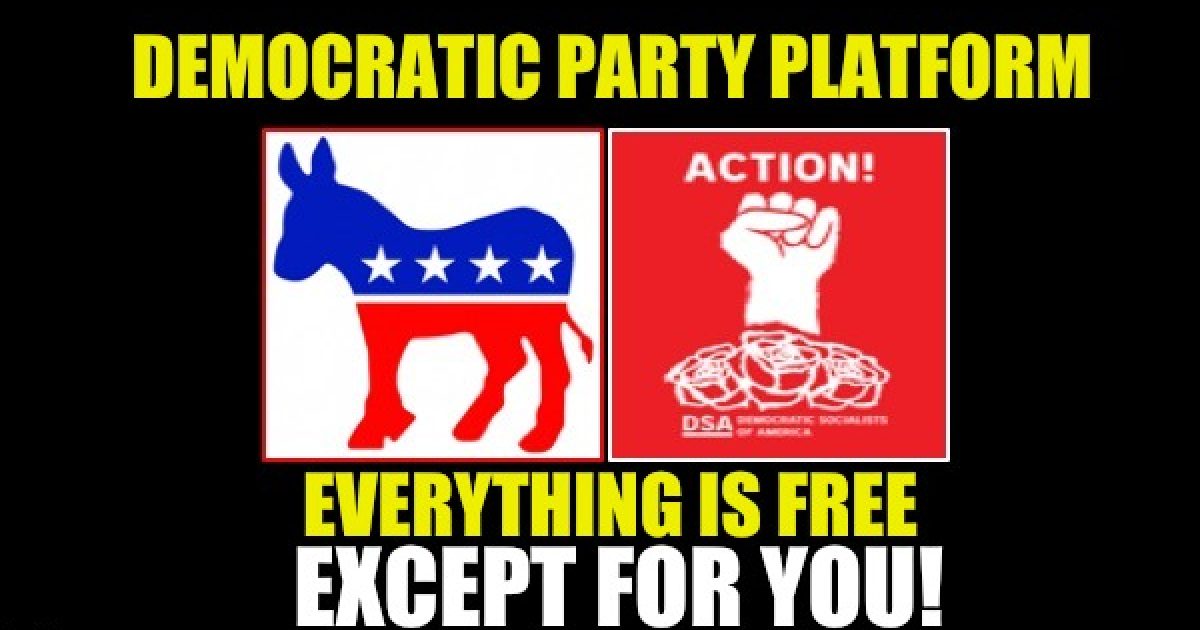 It sounds like a cliché, but this may well be the most crucial midterms in our lifetime. On the ballot, at least indirectly, will be socialism. Will Americans choose so-called “free stuff” or freedom?

I say so-called “free stuff” because there’s nothing free. Somebody has to pay for it.

A rising star of the left, Alexandria Ocasio-Cortez, is the poster child for the “free stuff” (versus freedom) agenda. She surprisingly won the primary against a ten-term U.S. Congressman in New York City. Her platform calls for Medicare for All and tuition-free college and trade schools.

Such political promises sound good. But what are the realities? Take the example of increased government control of our health care.

Economist Steve Moore of FreedomWorks and the Heritage Foundation wrote recently in the Washington Times: “Americans don’t have to imagine what a government-run system would look like. We have one that already covers millions of Americans. It is called the VA health system. Our veterans die in the waiting lines, and the hospitals often provide shoddy levels of care—to the very people who have earned through their service and sacrifices the best care in the world.”

These promises of free stuff from the government are empty promises, notes Mike Farris, the CEO of the Alliance Defending Freedom, in a recent interview with D. James Kennedy Ministries-Television. “Well, it never works. They’re being sold a lie. You want free college? Yeah, I want free college, everyone wants free college. But they have to recognize that somebody has to pay for it, and frankly there are not enough somebodies around. If we took all the assets of all the billionaires in the country…it would pay about 6 months of the Federal government deficit. That’s it. 6 months, and it’s gone.”

In an article for The Stream (10/29/18), Rob Schwarzwalder, a Senior Lecturer at Regent University, cites a recent study on the hard-core pro-socialists in our country: “Just eight percent of Americans identify as ‘progressive activists.’ They tend to be ‘younger, highly engaged, secular, cosmopolitan, angry.’ They ‘reject traditional sources of authority and privilege and focus on rectifying historical injustices.’”

That vocal minority has certainly captured the hearts and minds of many young people today. David Barton, the founder, and director of WallBuilders told our television audience recently that in 5500 years of recorded history, “you cannot point to any socialistic nation that has increased freedom and increased prosperity for the people. Yet right now seventy-five percent of students in college support socialism and think it’s the best form of government. Now there’s nothing historically you can point to, there’s nothing statistically you can point to; but that’s what they’ve been taught.”

What’s worse is that if these people don’t get their way, they are liable to throw a tantrum. We often see that in the form of riots in the streets. Barton observes, “They’ve also been taught that if people disagree with what we’re telling you, you need not tolerate that. You need to stand up; you need to go after them, you call them bigots. So we know that with college students and graduates, fifty-three percent do not support free speech and nineteen percent of college students right now think that violence is an acceptable response to speech they disagree with. Now that’s what we’ve been teaching in the classrooms.”

In the Ten Commandments, God teaches us that we shall not steal. That is divine sanction for private property. The government should likewise not steal. That is ultimately what socialism is: government theft from citizen A to give to citizen B. The Decalogue also condemns coveting. Yet socialism—the promise of “free stuff”—is at its core, the politics of envy. Take from the rich and give to the poor.

The Bible teaches us to help the needy. That is all voluntary. That is the church’s job. When the government gets involved in the “charity business,” it is not only wasteful and undermines the family, human dignity, and self-reliance; but ultimately it can end up becoming tyrannical. Venezuela is a textbook case of this. That Latin American nation went from one of the naturally wealthiest countries in our hemisphere to a complete basket case.

But is socialism coming, like it or not, via the “blue wave” supposedly coming in the mid-terms? Barton advises, “The wave is going to be what you decide it to be when you walk in that booth and when other Christians like you walk into that booth. If they would vote conservative, biblical, constitutional values, that will be the wave that everyone will be talking about the morning after the elections.”