College Students LOVE Medicaid for All–Well, Until They Hear It’s Not Free 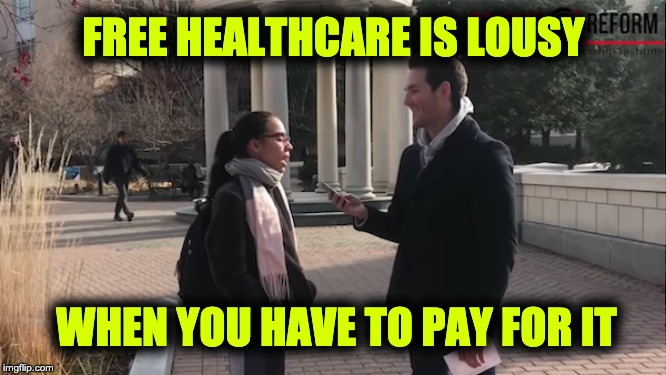 Free is good! Who doesn’t love free stuff, right?  College kids thought that free healthcare was excellent; then, someone said that they had to pay for it and…free stuff isn’t free.

The Democrats have long touted Medicaid for All, or in other words, a single-payer healthcare system as “the” solution to rising healthcare costs.  Many of the current Democratic presidential contenders are pushing this flawed concept somewhat hard.  Especially Bernie, the socialist Sanders, and Elizabeth “I hate business” Warren.

The idea here, of course, is very attractive in principle – that being that all Americans would have health insurance.  Who wouldn’t like that idea, right?  A bunch of college kids was told this, and they pretty much universally accepted this as a great idea.  Many, if not all, Democrats also think that Medicaid for All is the cat’s meow, especially the party leadership. No, not Nancy Pelosi, the women of The Squad.  Of course, college kids are young and inexperienced, they just think they know everything. Congressional Democrats are a little more well versed in the workings of the world and should, therefore, know better. But then again judging by the fake impeachment hearings, the Democrats don’t believe that facts matter.

Campus Reform’s Cabot Phillips decided to see just what college students thought of “Medicaid for All,” both before they knew the details, and after.

“Asking first whether they viewed the plan favorably or unfavorably, the results were near-universal.

‘I do support Medicare for all,’ one student said, …while others added, ‘I think every American deserves healthcare,’ and ‘I do support that. It’s an important form of universal healthcare.’

Yet another student said, ‘I don’t think there’s anything you could tell me that would make me view it unfavorably.’”

However, once students learned the details, like having to pay for this plan, and that Americans would be forcibly removed from their private insurance plans, support for Medicaid for All dropped like a rock:

“‘I mean they shouldn’t be kicked off, that doesn’t seem fair,’ one said…while another stated simply, ‘the government can’t force people to have healthcare with them…’

Friends, this kind of attitude is in large measure what is wrong with this country today, especially the everyone gets a trophy, no one loses, everything is done for them, no one receives grades,  hide in safe spaces generation who has been spoon-fed since birth.   They say well, it’s not my problem and everything should be free.

Watch the video from Campus Reform: