How One Doctor’s Fraud Started The Anti-Vaccination Movement 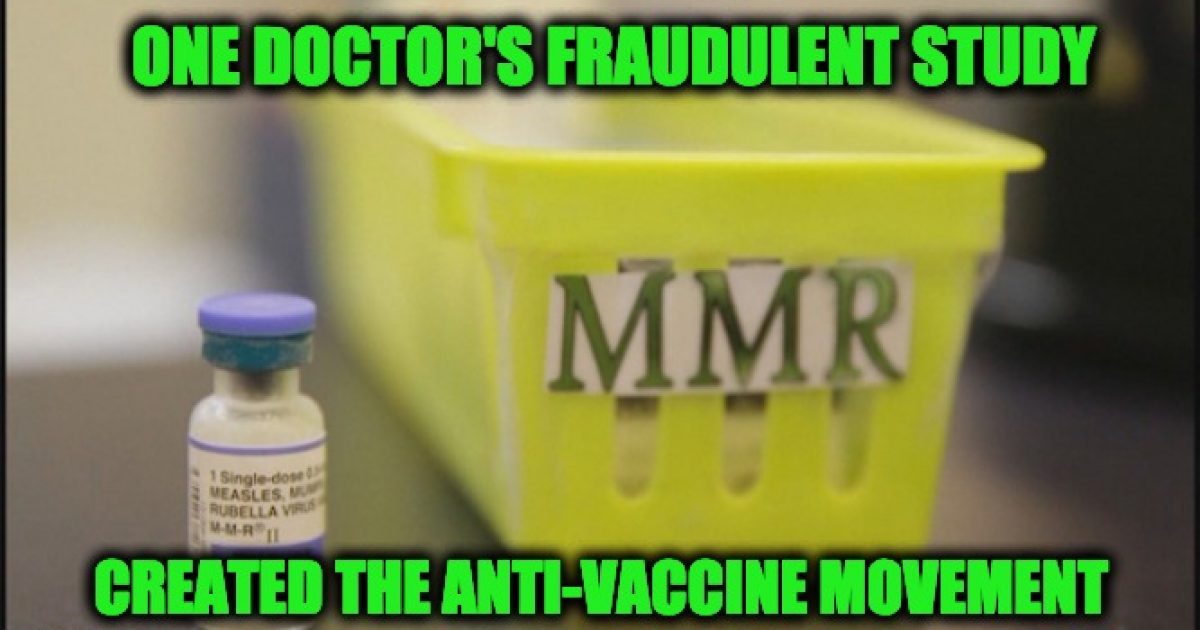 The CDC is reporting that from January 1 to March 7, 2019, 228 individual cases of measles have been confirmed in 12 states that is compared to 372 cases during the entire year of 2018. It also reports that the majority of people who got measles were unvaccinated and the highly contagious disease spreads quickly in places where people aren’t vaccinated.

Why do some parents refuse to vaccinate their kids? It all comes down to a fraudulent research study published in a British medical journal in 1998, by Dr. Andrew Wakefield. The study has been proven false many times over.  And because of his fraud, Wakefield is barred from practicing as a physician in the UK. He has moved to the US but has not been licensed to practice here also.

The supposed link between Autism and the Measles, Mumps, Rubella vaccine (MMR) is the medical version of the “birther” or “truther” story.  The original study that made a claim has never been able to be duplicated and the original paper was withdrawn as false by the

medical journal which published it.  Yet for the people who believe the Doctor’s fraud to be real, there is probably not enough evidence in the world to convince them the original study was bogus, but it is. The study’s believers continue to try and persuade parents not to vaccinate their kids, resulting in unnecessary cases of Measles and Mumps in the United States continuing to rise along with needless deaths from these childhood diseases.

In January 2011 the case linking the MMR vaccine to Autism was destroyed. In an article called, “Wakefield’s article linking MMR vaccine and autism was fraudulent” The British Medical Journal published the result of an independent investigation revealing that the British doctor who authored the study, Andrew Wakefield, was guilty of an “elaborate fraud” by faking data in his studies linking vaccines with autism.

Wakefield’s study and his claim that the MMR vaccine might cause autism led to a decline in vaccination rates in the United States, United Kingdom, and Ireland and a corresponding rise in measles and mumps. His continued warnings against the vaccine have contributed to a climate of distrust of all vaccines and the reemergence of other previously controlled diseases.

But according to an editorial in Lancet, the same medical journal mentioned above,  it was not possible that Wakefield made a mistake — he must have faked the data. To back up their claim they presented evidence generated by an investigative journalist who produced a series of articles based on examining the same medical records that Wakefield did.

In a series of articles starting this week, and seven years after first looking into the MMR scare, journalist Brian Deer now shows the extent of Wakefield’s fraud and how it was perpetrated (doi:10.1136/bmj.c5347). Drawing on interviews, documents, and data made public at the GMC hearings, Deer shows how Wakefield altered numerous facts about the patients’ medical histories in order to support his claim to have identified a new syndrome; how his institution, the Royal Free Hospital and Medical School in London, supported him as he sought to exploit the ensuing MMR scare for financial gain; and how key players failed to investigate thoroughly in the public interest when Deer first raised his concerns.

Deer published his first investigation into Wakefield’s paper in 2004. This uncovered the possibility of research fraud, unethical treatment of children, and Wakefield’s conflict of interest through his involvement with a lawsuit against manufacturers of the MMR vaccine. Building on these findings, the GMC launched its own proceedings that focused on whether the research was ethical. But while the disciplinary panel was examining the children’s medical records in public, Deer compared them with what was published in the Lancet. His focus was now on whether the research was true.

Who perpetrated this fraud? There is no doubt that it was Wakefield. Is it possible that he was wrong, but not dishonest: that he was so incompetent that he was unable to fairly describe the project, or to report even one of the 12 children’s cases accurately? No. A great deal of thought and effort must have gone into drafting the paper to achieve the results he wanted: the discrepancies all led in one direction; misreporting was gross.

In May 2010 after a seven-month investigation, the General Medical Council, which regulates all of Great Britain’s doctors ruled

Dr Wakefield had a clear and compelling duty to ensure that the factual information contained in the paper was true and accurate and he failed in this duty….Dr Wakefield’s continued lack of insight as to his misconduct serve only to satisfy the Panel that suspension is not sufficient and that his actions are incompatible with his continued registration as a medical practitioner.

Accordingly the Panel has determined that Dr Wakefield’s name should be erased from the medical register. The Panel concluded that it is the only sanction that is appropriate to protect patients and is in the wider public interest, including the maintenance of public trust and confidence in the profession and is proportionate to the serious and wide-ranging findings made against him.

In 2014 a meta-analysis of scientific studies covering 1.26 million children  released by the scientific journal Vaccine researchers stated firmly,  “In conclusion, this meta-analysis provides no evidence of a relationship between vaccination and autism or autism spectrum disorders and as such advocate the continuation of immunization programs according to national guidelines.”

Now that the evidence that Wakefield did not make mistakes but purposely committed fraud has been revealed, one more investigation of the doctor’s study should be made.  This time, the inquiry should be made by a criminal prosecutor because if this evidence of fraud holds true, Dr. Wakefield is the cause of hundreds of needless childhood illnesses and dozens of death and should spend some time in prison.