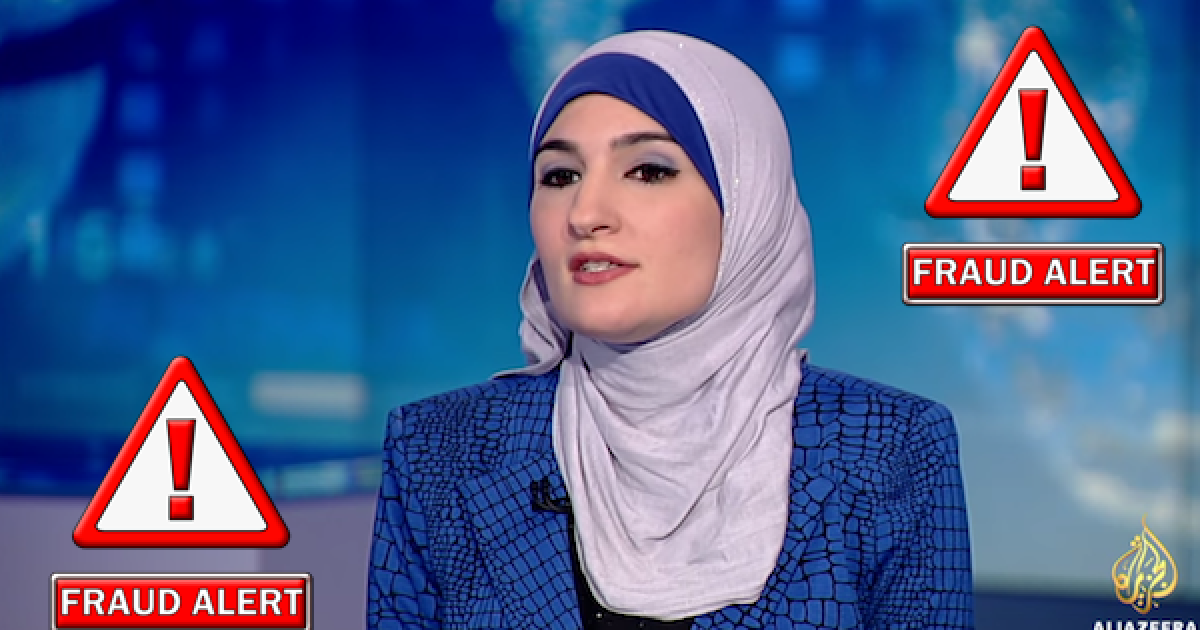 What’s that expression about wolves in sheep’s’ clothing?  On Tuesday, hater of America, Jews, and Israel  Linda Sarsour (yeah, that Linda Sarsour!) tweeted out what sounded like a genuine heartfelt appeal to provide aid to the many victims of Hurricane Harvey, which has ravaged Houston and its environs. It was a fraud

“Donate to the #Harvey Hurricane Relief Fund,” read the simple message, which included a link to a page which emblazoned with the equally urgent message:

Your donation is vital to ensuring that we have the resources we need to organize and fight for Texans devastated by Hurricane Harvey!

But according to Townhall, it wasn’t a relief fund at all.

This is the organization Sarsour wants you to pledge money to:

Rebuilding in areas impacted by #HurricaneHarvey will be most challenging for marginalized communities. DONATE HERE: https://t.co/eskDwgDPzR

The money raised by the organization will go to “shining a spotlight on inequalities” that may arise during the rebuilding effort. It does not appear that money will actually go towards the people who lost their homes in the storm.

Inequalities? What does that have to do with hurricane relief, you may ask. Well, nothing, actually.

Here’s what the site actually says:

Rebuilding in areas impacted by Harvey will be most challenging for marginalized communities. Nearly a quarter of Houstonians live in poverty, approximately 550,000 people, and there are about 575,000 immigrants in the Houston metro area. We will work to ensure that Harvey’s most vulnerable victims have access to critical services from first response and basic needs to healthcare, housing and transportation.

Together we will organize and advocate for our devastated communities, shining a spotlight on inequalities that emerge in the restoration of lives, livelihoods, and homes, amplifying the needs of hard-hit communities, and providing legal assistance for residents wrongfully denied government support. [Emphasis added]

The page is also filled with logos of far-left groups like the SEIU.

Not a dime of this money goes to victims of #Harvey. It goes to “Political Action”. pic.twitter.com/0FkQeq6WaC

So Linda Sarsour is attempting to exploit the victims of Hurricane #Harvey by fundraising off of the disaster. What a fraud. pic.twitter.com/L2ErQLdP3y

Sarsour wasted no time attacking those who shed light on her shenanigans. “‘Alt-right’ must have sent out an email blast. My mentions are on steroids,” she tweeted:

“Alt-right” must have sent out an email blast. My mentions are on steroids.

This only energized her critics:

Your mentions are on steroids because you are soliciting “relief funds” for an organization that says the money will not go to relief. https://t.co/MDoJLHhoOK

You put out a call to exploit disaster victims.

One person called her a “grifter.”

Right and left see what you are. #Grifter

Another suggested that Attorney General Jeff Sessions should prosecute her for soliciting funds under false pretenses:

Hopefully @realDonaldTrump will have the Attorney General prosecute you for solicitation of funds under false pretense.

Not everyone criticized Sarsour. One supporter said she should “keep up the good work,” telling her: “A strong, outspoken woman is a threat.”

Don’t pay them any attention. A strong, outspoken woman is a threat. Keep up the good work. Love from your sister in Islam.

According to the Washington Free Beacon, the fundraiser is part of Big Labor’s efforts to raise money for organizing:

The Texas Organizing Project Education Fund, a labor-affiliated group looking to make inroads in right-to-work Texas, launched the Hurricane Harvey Community Relief Fund in the wake of the flooding that has devastated the Houston area. The donation page says the fund will “move the material aid the most vulnerable hit by Harvey,” but that “material” goes beyond standard humanitarian aid. Donations, the page says, will help the SEIU-funded group organize workers.

“Your donation is vital to ensuring that we have the resources we need to organize and fight for Texans devastated by Hurricane Harvey,” the page says.

The relief fund is sponsored by a number of prominent liberal advocacy groups and politically influential unions: the SEIU; Communication Workers of America; Faith in Texas, a group that fights for “economic and racial justice”; Texas RioGrande Legal Aid; Texas Housers, an affordable housing advocate; and the labor-affiliated Workers Defense Project. While the group says it will meet the “first response” needs of residents, it plans to use the fund to advance its organizing agenda.

And, the report said, the effort has been widely criticized by labor watchdogs:

Labor watchdogs criticized the group for exploiting the tragedy to finance its political agenda. Michael Saltsman, research director for the pro-free market Employment Policy Institute, said that the Texas Organizing Project should be satisfied with the “large sums of money they get from labor unions to support a southern strategy for workplace organizing,” rather than fundraising off of the community’s devastation.

“The fine print for this so-called ‘relief fund’ makes clear that it funds workplace organizing efforts, rather than direct aid for Harvey victims,” he said. “If Americans want to support Hurricane Harvey relief efforts, they should donate to an organization like the Red Cross—not Big Labor and its affiliates.”

The Texas Organizing Project, which did not respond to request for comment regarding how fundraising will be split between humanitarian and organizing aid, has benefitted from hundreds of thousands of dollars from union contributions. It has received more than $1.7 million from labor unions since 2014.

No wonder Sarsour got hammered. But that wasn’t even the worst the Sarsour received. On Tuesday evening the anti-Semitic, anti-Israel, Sarsour was having problems with her I phone and tweeted

And some smart person set up a dummy account under a famous name, and won the internet with a one-word-answer:

She later blocked the “Mossadil” and erased the post.