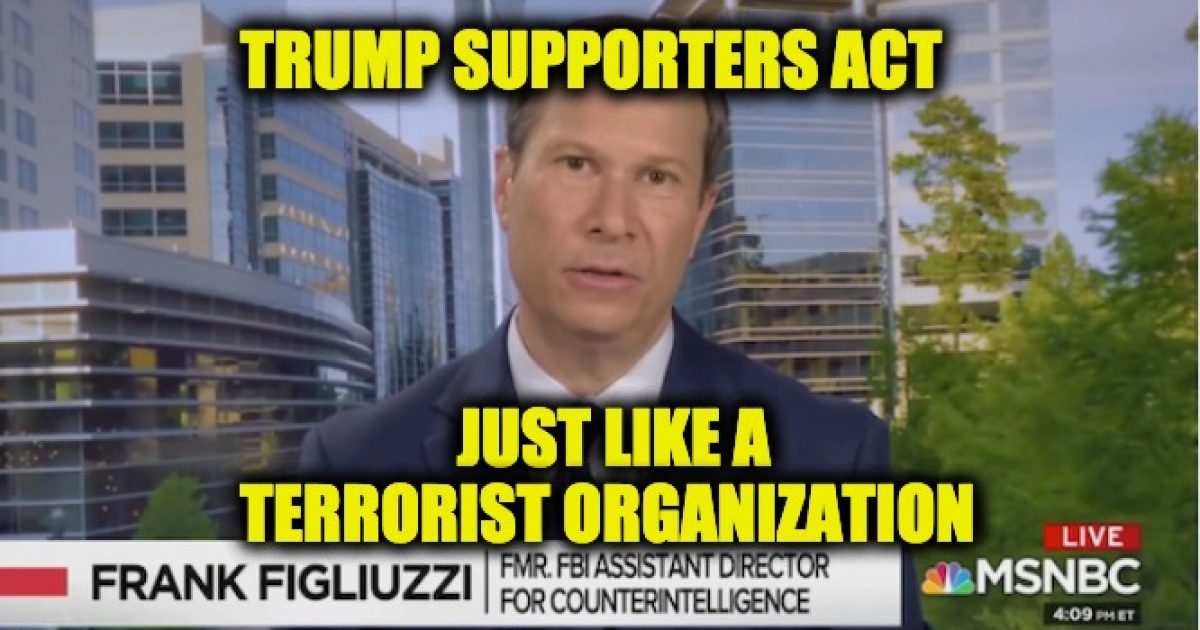 Last week Former FBI Agent/ MSNBC Contributor Frank Figliuzzi said President Trump was sending a message to white supremacists with his order to fly American flags at half-staff until Aug. 8. The letter “H” is the eighth letter of the alphabet, according to  FigliuzziAugust 8, or 8/8 stood for HH or Heil Hitler. This past Monday he added to that charge. Appearing on “Deadline: White House” with host Chris Jansing. Figliuzzi labeled all Trump supporters as terrorists.

Jansing wondered if it was really the best tactic for Democrats to be calling every Trump voter a foaming-at-the-mouth racist. After all, Democrats will need some of Trump’s voters to switch to the left side of the aisle if a Democrat expects to beat Trump in 2020.

I think one of the things, Frank Figliuzzi, is that this president has always, from anyone who was around him, Anthony Scaramucci knows this as well as anybody else, demanded this blind loyalty, right? “I say it, it must be so. Or even if you don’t think it’s so, you don’t criticize me for it.”

instead of talking sense, Figliuzzi once again went off the deep end, this time by comparing all Trump voters to terrorists.

Well, this is why it’s so important to look through the lens of radicalization when you look at this president and then apply counter-radicalization techniques. Because you’re right, attacking his followers is going to be counterproductive. He demands that loyalty, and they are loyal. So if you call Trump followers racist en masse, they simply coalesce around each other and become more defensive and protective of the leader, just as they would in, say, a terrorist organization

You see the same things happening now in white hate groups, in white supremacy groups, where not only is the internet facilitating the speed of radicalization but our leader, our chief executive, is seen as almost a mentor and a radicalizer. And unfortunately, today we did not hear from that person that these extremists and unstable people look to. He spoke in the passive voice, in the collective voice; we didn’t hear first person from him. We didn’t hear, “I condemn white hate ideology.” We heard the nation must condemn it. Well, the nation does condemn it. But we didn’t hear what we needed to hear, so what happens is the extremists interpret what the president read off the script today as something he needed to say, something he didn’t really want to say.

I know, I know. You are shaking your head and wondering why Figliuzzis day nurse lets him out of the ward without his protective helmet.