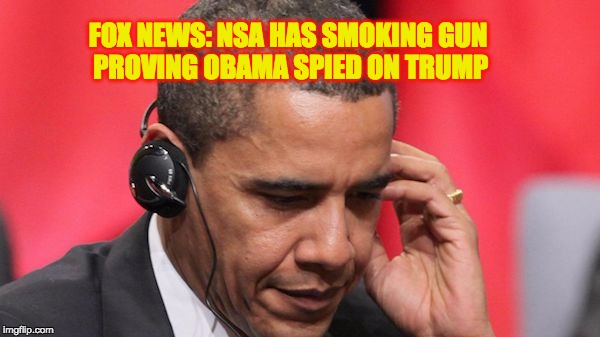 Fasten your seatbelt and get the big bag of popcorn–this is getting interesting.  According to Fox News’ James Rosen there is a  “potential smoking gun” coming soon that PROVES that Obama spied on Trump, well actually the Obama administration spied on the Trump team and perhaps even the President-elect himself. The information will supposedly prove that when the Obama Administration spied on Trump they made it seem as it was an incidental collection.

Republican congressional investigators expect a potential “smoking gun” establishing that the Obama administration spied on the Trump transition team, and possibly the president-elect himself, will be produced to the House Intelligence Committee this week, a source told Fox News.

Classified intelligence showing incidental collection of Trump team communications, purportedly seen by committee Chairman Devin Nunes, R-Calif., and described by him in vague terms at a bombshell Wednesday afternoon news conference, came from multiple sources, Capitol Hill sources told Fox News. The intelligence corroborated information about surveillance of the Trump team that was known to Nunes, sources said, even before President Trump accused his predecessor of having wiretapped him in a series of now-infamous tweets posted on March 4.

The intelligence is said to leave no doubt the Obama administration, in its closing days, was using the cover of legitimate surveillance on foreign targets to spy on President-elect Trump, according to sources.

The key to that conclusion is the unmasking of selected U.S. persons whose names appeared in the intelligence, the sources said, adding that the paper trail leaves no other plausible purpose for the unmasking other than to damage the incoming Trump administration.

For those of you thinking, “Didn’t Fox News say that Britain was Obama’s tool for spying on Trump and that was withdrawn?” The answer was yes, but that was Judge Napolitano, a good guy but a commentator, not a reporter.  James Rosen is an “old school” reporter, in that he relies on proof not conjecture.

The possibility of a “smoking gun” should set the media ablaze tonight and into tomorrow. There is already enough circumstantial evidence for us to surmise that the government did at least monitor some of the communications going on inside the Trump team, but to finally have definitive proof that the Obama administration misused our intelligence assets would be a game-changer.

Rosen hears that the “smoking gun” could be released as early as Friday (tomorrow), so buy the big bag of popcorn early.