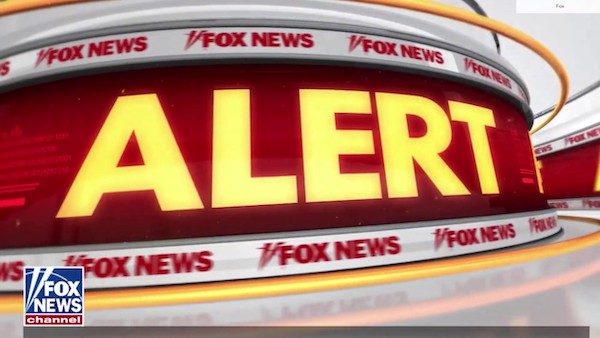 It has been interesting to watch the reaction on social media in the last few hours (i.e., Thursday evening, February 6, 2020) as word filters out that a Fox News briefing book derides the work of high-profile sources like John Solomon, Victoria Toensing, and Joe diGenova.

On one side, social media users are responding with cynical assumptions that the allegations about the Fox News sources must be true.

On the other side, users are assuming this is another false alarm from the leftosphere that will be found to have no substance.

Neither side seems much interested in finding out what’s actually going on.

That’s understandable.  Finding out what’s actually going on has gotten harder in the last decade, as the mainstream media have gone further and further down the path of spinning narratives rather than reporting events.  This isn’t an “always and everywhere” trend, but it’s marked enough to make sensible people doubtful, a priori, about much of what we hear and read.

That said, there are immediate and specific reasons to approach the “bombshell” news in this case with extreme caution.

Before providing just a couple of examples – the first examples that came out in quick-reaction searches – we’ll note the origin of the briefing book (which can be viewed here, courtesy of Matthew Keys’s The Desk).  At Fox News, this standard newsroom document is called a “Brain Room Book,” and provides a broad assemblage of background information on a topic; in this case, “Ukraine, Disinformation, and the Trump Administration.”

The attributed author is Bryan S. Murphy, Senior Political Affairs Specialist at Fox News.  According to his LinkedIn biography – which curiously did not appear in a Google search on “Bryan S Murphy Fox News”; I had to run a Yahoo! search to find it – Murphy has been with Fox News since 2002.  He has been a researcher the entire time, based on his list of jobs with the news channel.  Before that, Murphy worked for the National Journal as a research associate from October 2000 to July 2001.

Murphy got his bachelor’s degree from the University of Central Florida in 1998 and an MA from George Washington University in 2000. 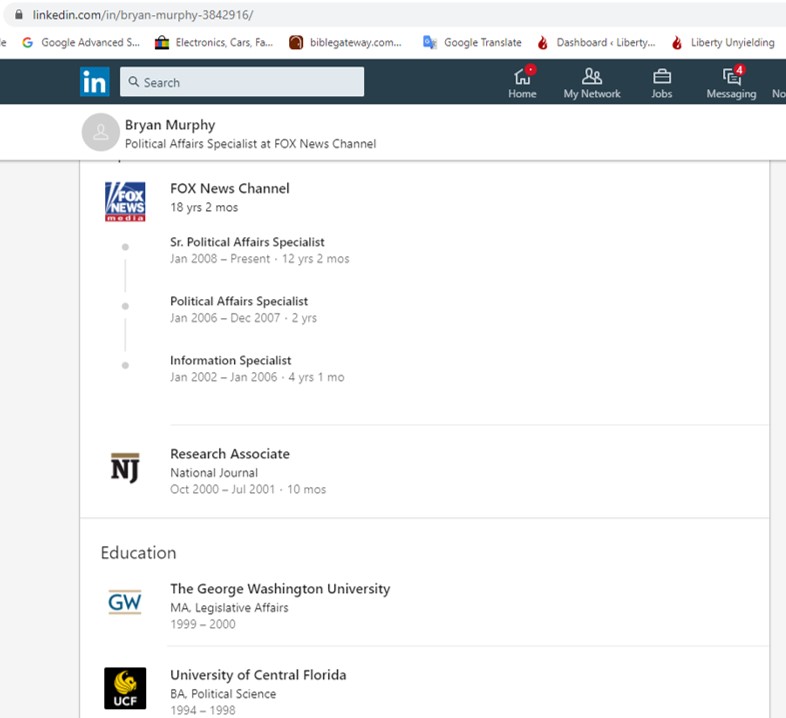 Bryan Murphy does not have a photo on his LinkedIn page, so the top banner is not included here. Click to enlarge for legibility. Screencap by author

This background has the appearance of being pretty standard.  One interesting by-line for Murphy was an op-ed for Fox News in July 2017, just before President Trump’s first meeting with Vladimir Putin at the G20 summit in Hamburg.  Murphy gave an exhaustive list of reported exaggerations and misstatements by Trump about his connections with Putin going back to 2013.  (Having had no time to research each of the claims independently, I include the link for your information, without either disputing or affirming what Murphy said.)

Moving on to the Brain Room Book at the center of the drama, the exciting part for outlets like Daily Beast begins on p. 2, where you will find negative assessments of the quality of reporting from John Solomon, Rudy Giuliani, and husband-and-wife lawyer team Joe diGenova and Victoria Toensing.  Read them at your leisure.

It will take time to pursue each allegation in the 162-page text about their quality as sources.  Giuliani figures significantly larger in the 162 pages than the others.  Moreover, the Brain Room Book is far from being “about” these four specific sources.  It covers much more ground than that. Accurately assessing the Brain Room Book itself would require reviewing all its claims, and not just the ones about the sources listed here.

At least one very suspect example

That said, one of its key claims about sourcing for Giuliani and Solomon leaps out immediately as dubious.  The background for it is information about Ukrainian official Nazar Kholodnytsky, one-time head of Ukraine’s Specialized Anticorruption Prosecutor’s Office.  On pp. 27-28, Bryan Murphy recounts that in April 2018, Kholodnytsky was accused of “pressur[ing] prosecutors, divulg[ing] secret data on investigations, warn[ing] suspects about planned searches, and other offenses.”

In a subsequent entry, Murphy continues: “The National Anti-Corruption Bureau (NABU) released audio recordings implicating Kholodnytsky in wrongdoing. … Kholodnytsky on April 4 confirmed that the tapes were authentic but said they were ‘out of context.’”

The Brain Room Book goes on to state that Kholodnytsky became a source for Giuliani and Solomon, with the implication that this taints their credibility.

Artem Sytnyk would be a particularly suspect accuser because he was convicted in the Ukrainian courts of meddling during the U.S. 2016 election campaign, by publicly releasing the notorious “black ledger” supposedly containing evidence of millions in payments to Paul Manafort.

Moreover, in an audio file obtained in 2019, reported at the Daily Wire, Sytnyk is heard apparently confirming that he had attempted to boost Hillary Clinton by doing that.

Ultimately, Sytnyk’s connection with Democrats and the Obama administration appears to be decisively confirmed by the fact that, in January 2016 – several months before he leaked the “black ledger” to the media – he was one of the Ukrainians present at the White House meeting sponsored by NSC official Eric Ciaramella, at which two topics were reportedly discussed: protecting the Bidens and their dealings in Ukraine, and digging up dirt in Ukraine about Paul Manafort.

A reasonable way of reading Solomon’s and Giuliani’s use of Kholodnytsky as a source, then, is to say that they were getting the other side of the story (the opposite of Sytnyk’s).  As an aside, that seems in keeping with Fox News’s “fair and balanced” slogan.  (It’s worth pointing out that Solomon’s reporting has meticulously noted the relationship between Sytnyk and Kholodnytsky.  It’s the briefing book that omits that key piece of information.  Make of that what you will.)

It is also reasonable to posit – although this, of course, isn’t proven – that the sudden exposure of this Fox News Brain Room Book is about placing baffles around Mr. Ciaramella.

In any case, citing accusations leveled by Artem Sytnyk is probably the least convincing thing you can do if your goal is to establish that Nazar Kholodnytsky is a bad source.

A disclosure process that doesn’t lend credence to this leak

There’s another circumstance that tends even more to undermine the implied case against Fox News’s sources.  Daily Beast introduced it in the initial report on the Brain Book on Wednesday:

The existence of the briefing book was first publicly flagged by Marcus DiPaola, a former freelance Fox News producer.

Yes, Marcus DiPaola.  He disclosed, among other things, that in 2015, he decided to “pitch [him]self” to RUPTLY (Russia Today’s on-scene video and news service) to go to Iowa and cover a Trump rally, in search of evidence that Trump had nefarious connections to Putin.

I saw irregularities with the Trump campaign, and requested a second meeting with the FBI. I asked the FBI to use a NSA exploit … to hotmic my phone, monitor my email, my Twitter, and my notes, and I made my best effort to not just report what I was seeing, but also ask questions and provide information that would lead our country’s foes to slip up and reveal more of what they knew. My … cooperation lasted from January 2016 to January 2019, and ended when the FBI terminated my status as a confidential human source because I had revealed my status as an FBI informant to Fox News Channel after learning that they produced an internal document with significant … amounts of publicly available but damning evidence against President Trump, which prove beyond a reasonable doubt that he is a traitor to the United States. Fox News Channel’s Washington Bureau Chief Bryan Boughton fired me …

Below, find DiPaola’s tweet thread containing these and other disclosures, including the following allegation about what happened after he was fired:

I received a bunch of intimidating phone calls and got sent to a mental health clinic at 35 K Street where a quack doctor poisoned me, I believe at the behest of rogue actors within Fox News Channel.

Before the rest of my story comes out, I need to clear some things up: The FBI did not recruit me for or plant me in Trump campaign press corps, or at Fox News Channel. I was never paid money, I never asked for money. In early January 2016, I walked into the FBI Chicago Field…

We’re not quite to the point of Cousin Vinny’s “I got no more use for this guy” line.  But in terms of who’s going to sound sane – and dare we say fair and balanced – in all this, the scales are leaning toward Fox News; specifically with the codicil that nothing has been proven against the use of sources by Solomon, Giuliani, et al.*

Perhaps something can be proven against them (beyond the common-sense point that skepticism and a continuing search for corroborating evidence are at all times proper where literally everyone in the mix has a partisan motive, and allegations of corruption are being flung around like confetti).

But I’ll have to check my planner to see if I’ve got time to do more homework just because the left-wing media have spun out another “bombshell.”

* Many regular viewers of Fox News will be aware that diGenova and Toensing have been absent from Fox shows for a number of months now.  Although I’m not aware of any statement by Fox News about that, I suspect it’s due to the fact that one of their legal clients is oligarch Dmitry Firtash, who has figured in multiple ways in the Russiagate and Spygate dramas.  The appearance of partiality and one-sided motive would be a governing concern for Fox in that case.  It’s not proof that anything Toensing or diGenova has said is untrue, but it creates concern and doubt about bona fides.