Former Clinton Staffer Says: Tempting To Beat The Crap Out Of Rand Paul 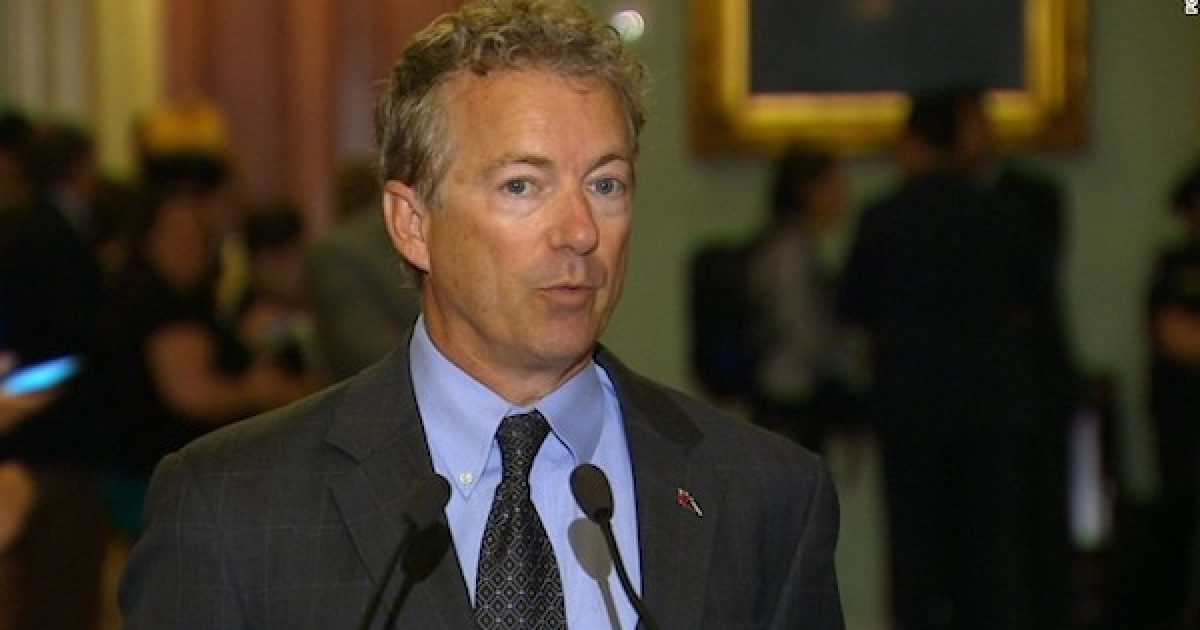 On Sunday, Claude Taylor, a former Clinton White House and presidential campaign staffer, said on Twitter that it would be “tempting to beat the crap out of Rand Paul.”

I never advocate violence but if I lived in Bowling Green it would be tempting to beat the crap out of Rand Paul.

The tweet has since been taken down, it is unknown if it was censored by twitter or taken down by Claude. Perhaps he filed it with Hillary’s missing emails. But there were screenshots: 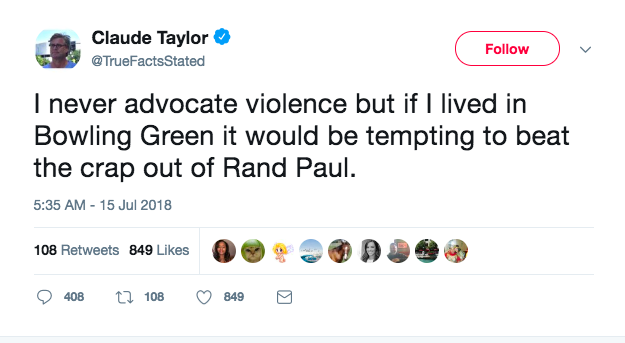 Maybe it was removed because it generated a negative response like the below:

Claude? Really? Lighten up Francis! You couldn’t bust a fruit in a fruit fight!

@Leona1970 are you seriously threatening violence against @RandPaul? Maybe the Secret Service should pay you a visit.

This is degenerate. When you lose elections, you resort to violence. @RandPaul has already been assaulted.. Why are you so hateful?

It is so stupid how these people think they can be clever when they make these threats.

The left has no message except to hate Trump and his supporters. They’re now the party of resistance. Their resistance by all means necessary is why Democrats are continuing to #WalkAway.

That’s easy. As we’ve said here time and again, liberalism, at its core, is an ideology of insane bloodthirsty rage and hate. Liberals like Taylor prove that assertion correct every single day.

There’s nothing backhanded about it.

Because he said something you don’t agree with? You people have truly lost your minds. Or maybe it’s just that the insanity you were able to keep hidden so long has finally gained full control of your faculties.

As Townhall notes, Taylor’s unhinged tweet comes just months after Rand Paul was assaulted by his neighbor, and despite what you may have heard, the attack had nothing to do with an unneighborly land dispute. At least according to Senator Paul:

Before Senator Paul was violently attacked from behind, he had no conversations or discussions with the attacker. There was no ‘longstanding dispute.’ This description is untrue. It is impossible to have a dispute when no words of disagreement were ever spoken – neither immediately nor at any other time before the attack occurred. In the decade prior to the attack, Senator Paul had no contact with the attacker.

The attack was a pre-meditated assault that broke six of the Senator’s ribs and was complicated by fluid and blood around the lung and recurrent pneumonia. Any description of this attack that implies a ‘yard dispute’ justifies such violence and misses the point.”

I tweeted Claude to ask if he took the tweet down because he lost the urge to attack Rand Paul or if he accidentally filed it with Hillary’s missing emails? He hasn’t responded.

This is the modern left, and it looks more and more as if leftists such as Claude really do want violence and bloodshed in the streets. Much of this post was first seen at ConservativeFiringLine