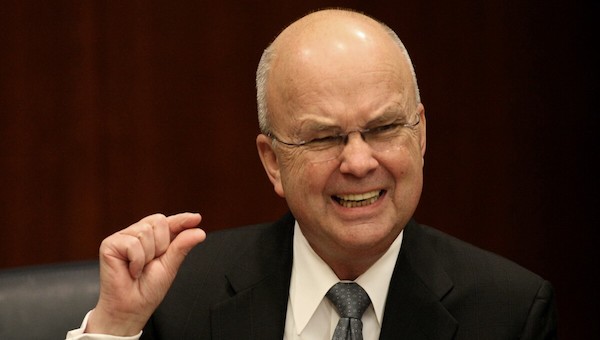 Doing his part to foment violence, bloodshed, and possible civil war, former CIA and NSA director Michael Hayden put forward the notion that the entire Republican Party is the most dangerous political force on the entire planet.

His message was in response to a tweet from Financial Times editor and writer Edward Luce, who tweeted, “I’ve covered extremism and violent ideologies around the world over my career. Have never come across a political force more nihilistic, dangerous & contemptible than today’s Republicans. Nothing close.”

Hayden wrote: “I agree. And I was the CIA Director.”

I agree. And I was the CIA Director https://t.co/LRAHDDyy4n

This, by the way, is the SAME Michael Hayden, who agreed with the idea of executing Trump over the Mar-a-Lago raid. And the same Michael Hayden who compared America to Nazi Germany.

Other governments have separated mothers and children pic.twitter.com/tvlBkGjT0h

And with this tweet, it’s clear that Hayden wants every Republican similarly executed.

You are one of the most evil people on Earth

You lied to Congress about the NSA's domestic spying programs

You droned a lot of innocent people in the Middle East

Wow. I remember when we were prosperous, energy independent, and had more money in our pockets. World was safer and no new wars. Oh wait. The republicans were in charge then

And who was in the White House? Oh yeah, Trump. The same man Hayden wants to be murdered.

You’re disgusting . I’m a republican conservative and value our country and constitution which most of my fellow republicans do . To make us out as extremists for doing so is a disgrace for anyone who has or does work for public office . Did you call out BLM or Antifa ?

This is a dangerous and (I hope) dishonest thing to post.

If the CIA believes half the American people are dangerous and violent, the CIA needs to be disbanded.

Foreign threats are far less of a threat than a rogue federal agency like CIA.

We also sent a message with a question we know will never get answered.

Hayden was widely criticized by conservatives for his statement seemingly indicating that he believes Republicans are more of a threat than ISIS or the Chinese Communist Party.

Washington Free Beacon investigative reporter Chuck Ross pointed out that Hayden was heading up the CIA when the U.S. was attempting to hunt down 9/11 mastermind Osama bin Laden.

It’s no wonder a growing number of Americans are concerned they may be attacked by their own government.