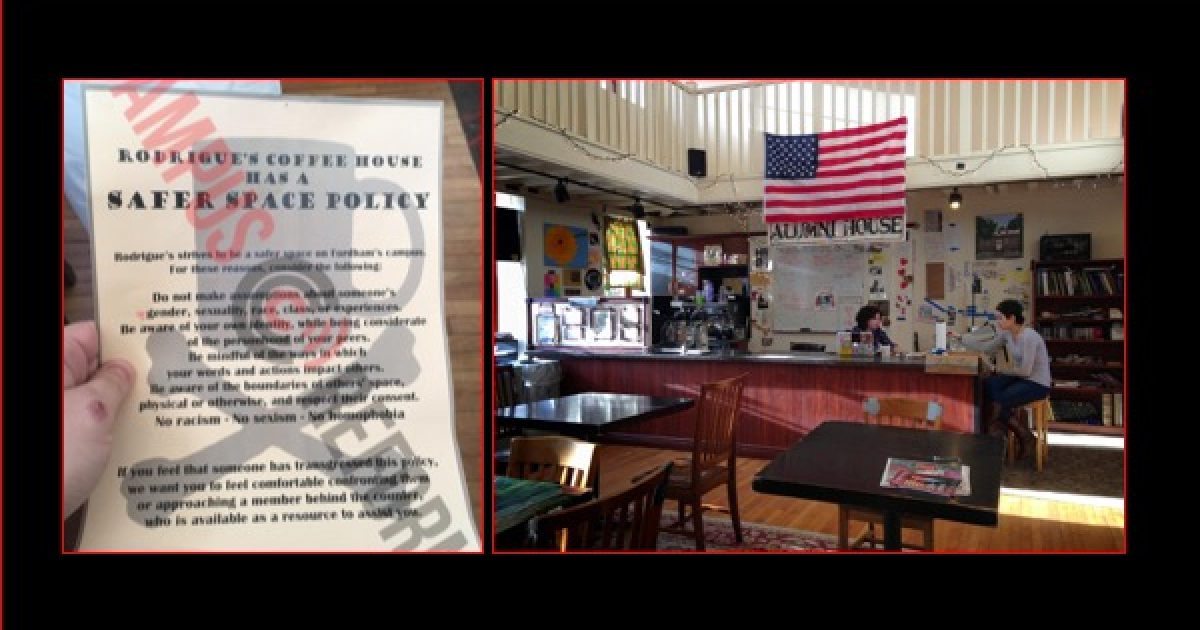 A university is currently investigating their campus coffee shop after a video surfaced showing Republican students being discriminated against for their political beliefs.

College Republicans’ members were booted from Fordham University’s coffee shop AFTER they bought items because they were wearing “Make America Great Again” hats.

In the video posted by the conservative news site Campus Reform, the self-identified president of Rodrigue’s Coffee House, which is run by a student club, tells the students that she is removing them to ensure the safety of other customers, saying that their hats violate the shop’s policies.

The president of the shop said, “I am protecting my customers,” to which one of the College Republicans’ members replied, “We are your customers, we bought something.”

In later comments in the video, the woman can be heard telling the club members that their hats “violate safe space policy.”

“You are threatening the integrity of our club. This is a community standard — you are wearing hats that completely violate safe space policy,” she said. “You have to take it off or you have to go.”

A flier obtained by the College Republicans somewhat outlines the rule, explaining the shop’s policy against “racism,” “homophobia” and “sexism.” The rule appears to be that of the club, rather than the college.

The flier he took a photo of, read:

“Be aware of the boundaries of others’ space, physical or otherwise, and respect their consent. No racism – No sexism – No homophobia. If you feel that someone has transgressed this policy, we want you to feel comfortable confronting them or approaching a member behind the counter, who is available as a resource to assist you”

So basically the coffee shop has been declared a “safe space” by the snowflakes.

A member of the College Republicans blasted the university for allowing the club to discriminate based on political views in on-campus facilities.

Fordham University issued a statement on Saturday to The Hill, saying that the university has no campus-wide safe space policy and that the video amounted to a “dispute between students.” The school also indicated that it is investigating the incident.

Assistant Vice President Bob Howe said in an email,  “There is no University safe space policy, nor one that excludes any members of the Fordham community from any public spaces on the basis of their political views. Fordham is a community that values diverse opinions, and in which students should disagree with one another in a civil fashion.”

“The University is still investigating the incident, and students who may have violated the University code of conduct will be met with the appropriate student conduct process,” he added.