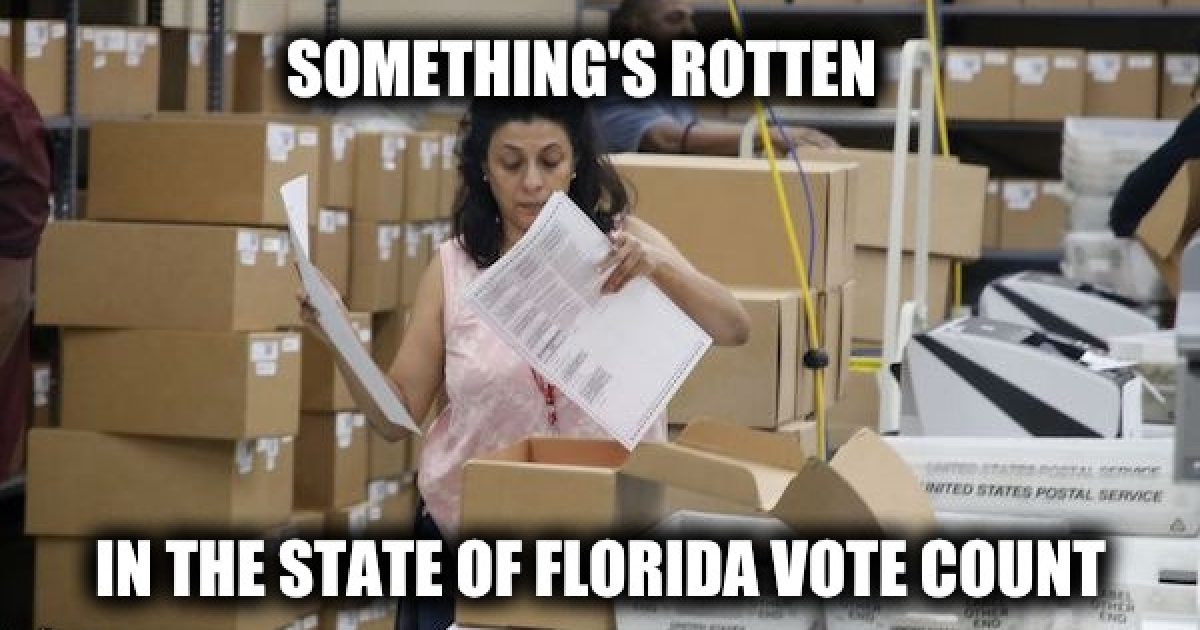 The attorneys for the Florida Democratic gubernatorial and Senate candidates objected Friday to the rejection of a provisional ballot cast by a non-citizen. While the objection was denied it just adds to the craziness of the Florida vote count and casts additional doubt upon the state’s handling of the 2018 midterms.

Lawyers for the Florida Democratic gubernatorial and Senate candidates objected Friday to the rejection of a provisional ballot cast by a noncitizen, according to a transcript obtained by Fox News.

The incident occurred during a canvassing meeting Friday in Palm Beach County, where provisional ballots were being examined. According to the draft transcript of the meeting, taken by a court reporter hired by the Florida Republican Party, a provisional ballot was ordered excluded from the count, as it came from a non-U.S. citizen.

“First one of these we’ve seen,” said Judge August Bonativa.

“Not a U.S. citizen, not counted.” said Supervisor of Elections Susan Bucher, according to the transcript.

It was at this point where lawyers representing Democratic gubernatorial candidate Andrew Gillum and Sen. Bill Nelson, D-Fla., issued objections — although they did not give reasons for those objections. The objections were noted, but the vote was still not counted. More

The fact that a non-citizen made it to a polling place and actually cast a ballot is already a considered a catastrophic failure, regardless if the vote counts or not.

Nelson distanced himself from the objection to non-citizens votes not being counted only after it became publicly known. Should these districts be counted now? Way too much corruption.

The Ends Justify The Means And By Any Means Necessary News:

People who are not citizens do not have any right to vote. Period. Or should we be allowed to vote for Canada, Mexico, Germany Elections as US Citizens??? #stopthesteal Lawyers for Gillum, Nelson campaigns objected to noncitizen’s vote being denied https://t.co/rgg3TULEHq

There are too many violations of the Florida law occurring in Palm Beach and Broward counties, one way or another the Florida vote results are going to be questioned:

Broward County Supervisor of Elections Brenda C. Snipes said Tuesday night that 634,000 votes had been cast in the county. But by Thursday night, Snipes was claiming 712,840 ballots had been cast.

The effect of these newly discovered votes that inexplicably appeared long after they should have been counted shrunk the leads of Republicans Gov. Rick Scott in the Senate race and former U.S. Rep. Ron DeSantis in the gubernatorial contest.

Over at Palm Beach:

On Wednesday morning, Palm Beach County Supervisor of Elections Susan Bucher stopped filing updates of the vote count with the Florida Department of State as required by law. The law mandates that she report every 45 minutes until all the election results are in.

Instead, Bucher dropped news of the 15,000 surprise ballots she’s counted since Tuesday night at any time she chose.

Besides telling the state to get lost, Bucher is also refusing to allow designated official political party representatives into the ballot counting area. She’s kept them isolated behind a glass wall where they can’t see and hear all that’s going on – yet another violation of Florida election law.

Even more troubling, Bucher has copied vote-by-mail ballots that she claims are damaged, but without allowing witnesses to observe the process as required by Florida law. In fact, she explicitly denied requests for witnesses to see her staff at work.

As election supervisor, Bucher also assumed the power to determine what constitutes a “valid vote.” Under Florida law, she doesn’t have that authority. She can only refer questionable ballots to the county’s bipartisan Canvassing Board.