They Made The Decision To Abandon Their Responsibility Not Abbott 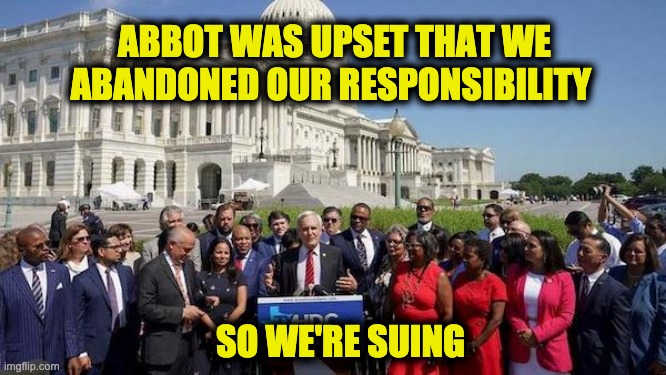 Several Texas Democrats from the state legislature decided that instead of accepting defeat on a voting security bill bound for law, they would simply leave the Lone Star State to deny a quorum and stop the vote from happening. The maneuver forced the state’s Governor, Greg Abbott, to threaten to arrest them upon their return, not to send them to jail but to bring them directly to the Texas House chamber, so they complete their responsibility.  fleeing Texas Democrats sue

As these cowardly lawmakers are living in a quality Washington DC hotel, some of them are suing Abbott over the emotional distress that their own decisions have caused them.

Well, we think they are suing because at least two of the fleeing Democrats included in the suit are claiming they were added as a plaintiff without their permission.

The Texas Tribune broke the story:

Twenty-two Texas House Democrats sued some of the state’s top Republican leaders in federal court in Austin late Friday, alleging that GOP officials’ efforts to bring them home for a special legislative session infringed on their constitutional rights to free speech and to petition the government for redress of grievances.

The lawsuit was filed on the final day of the first special session called by Gov. Greg Abbott — and on the eve of a second specially called legislative session — and names as defendants Abbott, House Speaker Dade Phelan and State Rep. James White.

The 22 Texas House Democrats filing the lawsuit were part of a larger group of over 50 who flew to Washington, D.C., to prevent the Texas legislature from voting on an election and voting reform bill.

The reason for the lawsuit is pure nonsense. According to the suit filed by the attorney for the fleeing Dems:

….have been “deprived of liberty for substantial periods of time, suffered much anxiety and distress over separation from their families, and much discomfort and embarrassment.” They further claimed their “reputations” have been “impaired.”

About that attorney, according to the State Bar of Texas, the Democrats’ attorney, Craig Anthony Washington, who is a former Democratic lawmaker, is practicing law under a probationally suspended license.

The chutzpah of this lawsuit gets even stranger.  Per KWTX, a TV channel out of Waco:

The lawsuit alleges that some Democrats are being targeted because of their race and skin color, but then provides no evidence.

It also claims the three Republican lawmakers acted together under the “color of law” to cause the harm alleged in the suit, but then pointsno specific harmful actions other than “public statements.” The lawsuit also says some individual plaintiffs experienced “retaliatory attacks, threats, and attempts at coercion relating to the exercise of their First Amendment rights” but again does not provide specifics.

KWTX also reported that not all the plaintiffs knew about or even wanted the lawsuit. On Saturday morning, Texas Rep. Shawn Nicole Thierry issued a statement saying she had not asked to have the suit filed in her name. “I did not request, review or authorize the filing,” she said.

An hour after Rep. Thierry issued her statement Rep, Nicole Collier issued a statement similar to Thierry’s.  The Texas Tribune asked attorney Craig Anthony Washington about the Collier and Thierry statements, but he declined to comment.

This entire lawsuit is crazy.  Greg Abbott or any of the other defendants on the lawsuit did not make the fleeing Democrats take their case of Miller Lite and leave for Washington DC. It was the plaintiffs and the other runaway Texas reps who decided to avoid the responsibility they were elected to do.  And THAT’S chutzpah!

Below is a video interview with Texas Lt. Gov. Dan Patrick on Fox and Friends about the lawsuit.