FLASHBACK: When Chuck Schumer Wanted An Up Or Down Vote, No Matter Who’s In Charge 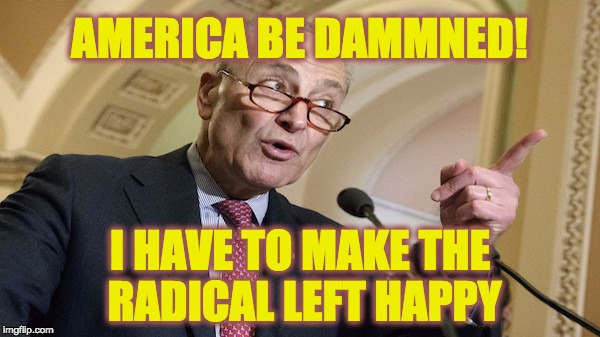 Sometimes it’s a surprise when Sen. Schumer isn’t being a hypocrite, in this latest video from 2013  Chuck Schumer got to tag along at the end of a statement by then majority leader Harry Reid.  They announced they were ending the filibuster for most presidential appointments. Schumer said there should always be an up or down vote no matter who is in charge.

In the video below Reid drones on for one and a half minutes saying in part the there should be only two reasons for a filibuster:

“For the first 140 years as a country, there were no filibusters. The founding fathers were very clear in what they thought there should be supermajorities [for]. Impeachments. And, of course, on treaties. And in the same paragraph, as it deals with two-thirds votes, specifically the founding fathers did not mention, at all, other things other than those two things that required a super majority.”

Senator Schumer wrapped things up with:

Last week the Senator said something totally different. He called for his senate Democratic Party conference to filibuster Judge Gorsuch.

I have concluded that I cannot support Judge Neil Gorsuch’s nomination to the Supreme Court. His nomination will have a cloture vote. He will have to earn 60 votes for confirmation my vote will be no and I urge my colleagues to do the same>

Judge Gorsuch has been widely praised as an excellent pick for the nation’s highest court, even receiving the American Bar Association’s highest rating. During his confirmation hearings Gorsuch handled himself admirably despite being unfairly prodded by Judicial Committee Democrats, including the absurd Senator Al Franken. So why is Schumer changing his opinion on up and down votes?

Senator Schumer is proving that he doesn’t really care about the country as long as he can score political points by obstructing the operations of the government. Something he fought against during the Obama presidency.
Facebook Twitter Flipboard