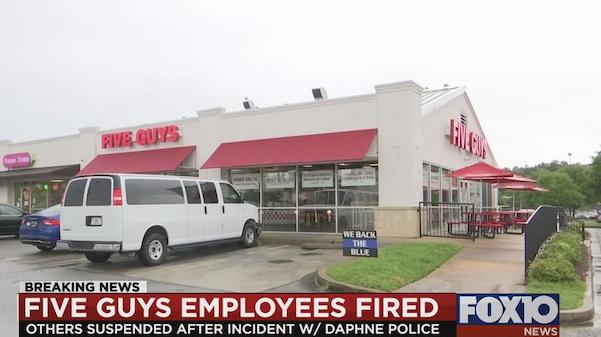 What kind of bullsh*t profiling is this? Because of the actions of a very few law enforcement officers, there’s been a great debate raging in our nation these days regarding the behavior of our police officers, specifically in regard to interactions with people of color. Much of the rhetoric in this discussion has been heated, and this has pushed some Americans to lose respect for the law enforcement community.  In Alabama, this point of view was manifested at a Five Guys burger joint.

The officers claim that six or seven employees in the establishment turned their backs on the officers as they entered the restaurant chain. One officer reportedly heard an employee say, “I’m not serving them.”

The officers then left and went to another restaurant.

“The Daphne Police Department appreciates the outpouring of support from our community and from supporters of Law Enforcement across the country,” Daphne Police said in a statement earlier this week. “We also want to thank Five Guys on a corporate and local level.”

Gee if someone had shown up to rob that particular Five Guys, I wonder who those Daphne Alabama employees would have called? The same police they stiffed, that’s who.

Hi there. Please know that the actions and sentiments of a few employees in Daphne, AL do not represent Five Guys or the local franchisee. The actions the Daphne, AL franchise have taken include termination and suspension of the employees involved.

Five Guys responded quickly once they heard about the employees’ refusal.

Five Guys employees in Daphne, Ala., who reportedly denied three police officers service have been fired or suspended, the restaurant said.

The Daphne police department went on to release a statement that recognized these as the actions of the individuals and not of the franchise, hoping to quell any possible blowback for Five Guys.

Below is a TV news report about the incident: