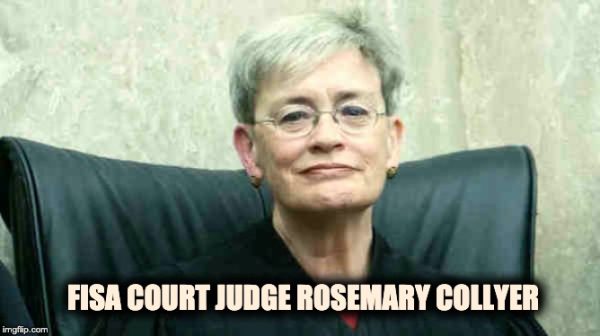 In a very unusual move, the presiding judge of the Foreign Intelligence Surveillance Court (FISA) Rosemary Collyer, ripped the FBI Tuesday for the falsehoods used on applications to wiretap former Trump campaign aide Carter Page. Judge Collyer ordered the agency to up with solutions to prevent it from happing again by January 10th (embedded below). FISA Court Rips FBI

After laying out how a FISA warrant is supposed to be prepared, Judge Collier

“The FBI’s handling of the Carter Page applications, as portrayed in the [Office of the inspector general] report, was antithetical to the heightened duty of candor described above. The frequency with which representations made by FBI personnel turned out to be unsupported or contradicted by information in their possession, and with which they withheld information detrimental to their case, calls into question whether information contained in other FBI applications is reliable.”

The [FISA court] expects the government to provide complete and accurate information in every filing with the court, Without it, the [FISA court] cannot properly ensure that the government conducts electronic surveillance for foreign intelligence purposes only when there is a sufficient factual basis.

The Horowitz report released on December 9th by DOJ Inspector General Michael Horowitz found that the FBI had withheld exculpatory material about Mr. Page from the court and made what he called misleading statements about his relationship with another government agency. In total,  Horowitz documented 17 significant errors or omissions (lies?)  in a series of applications for surveillance against Mr. Page.

Judge Collyer ordered the Justice Department to get back to them by January 10th with a sworn letter fessing up to fess up to what they did and explaining what steps it was taking to prevent such lapses in the future.

THEREFORE, the Court ORDERS that the government shall, no later than January 10, 2020, inform the Court in a sworn written submission of what it has done, and plans to do, to ensure that the statement of facts in each FBI application accurately and completely reflects OIG Report at 157-59, 365-66 in September 2016, an FBI agent provided an NSD attorney with information about the timing of Mr. Page ‘ s source relationship with another government agency and its relevance to the FISA proffer that was contradicted by a memorandum received from the other agency in August 2016); id 160-62, 364, 367 (FBI personnel exaggerated the extent to which Christopher Steele’ s reporting had been corroborated and falsely represented that it had been used in criminal proceedings)

Base on the lies pointed out by Michael Horowitz, instead of proving a sworn writing letter, Carter Page should be allowed to publicly swear out at the FBI leadership involved in the FISA applications. Then he should sue their arses off.

Judge Collyer’s order is embedded below.