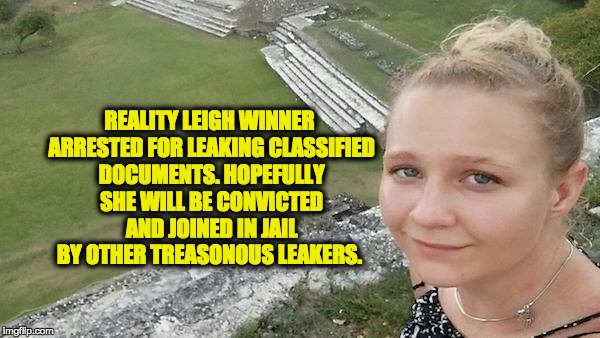 The Trump Administration has finally plugged a leaker. Reality Leigh Winner, 25, is facing charges (warrant embedded below) after she leaked  highly classified National Security Agency document to a media outlet in May (Yes he first name is Reality and the Loser’s last name is really Winner).

Winner allegedly leaked the secret document to The Intercept, which was the source of an article published Monday June 5th by the site which provides details of an unsuccessful 2016 Russian military intelligence cyberattack on a US voting software supplier.

The Justice Department announced the arrest of Reality Winner, about an hour after the  The Intercept published the May 5 intelligence report from the National Security Agency:

Once investigative efforts identified Winner as a suspect, the FBI obtained and executed a search warrant at her residence. According to the complaint, Winner agreed to talk with agents during the execution of the warrant. During that conversation, Winner admitted intentionally identifying and printing the classified intelligence reporting at issue despite not having a “need to know,” and with knowledge that the intelligence reporting was classified. Winner further admitted removing the classified intelligence reporting from her office space, retaining it, and mailing it from Augusta, Georgia, to the news outlet, which she knew was not authorized to receive or possess the documents.

Ms. Winner,–the loser, was a government contractor in Georgia, who works for Pluribus International Corp, she was arrested by FBI at her home this weekend. Apparently she had access to the information because of her top secret security clearance.

According to Heavy.com she has made anti-Trump tweets in facebook. 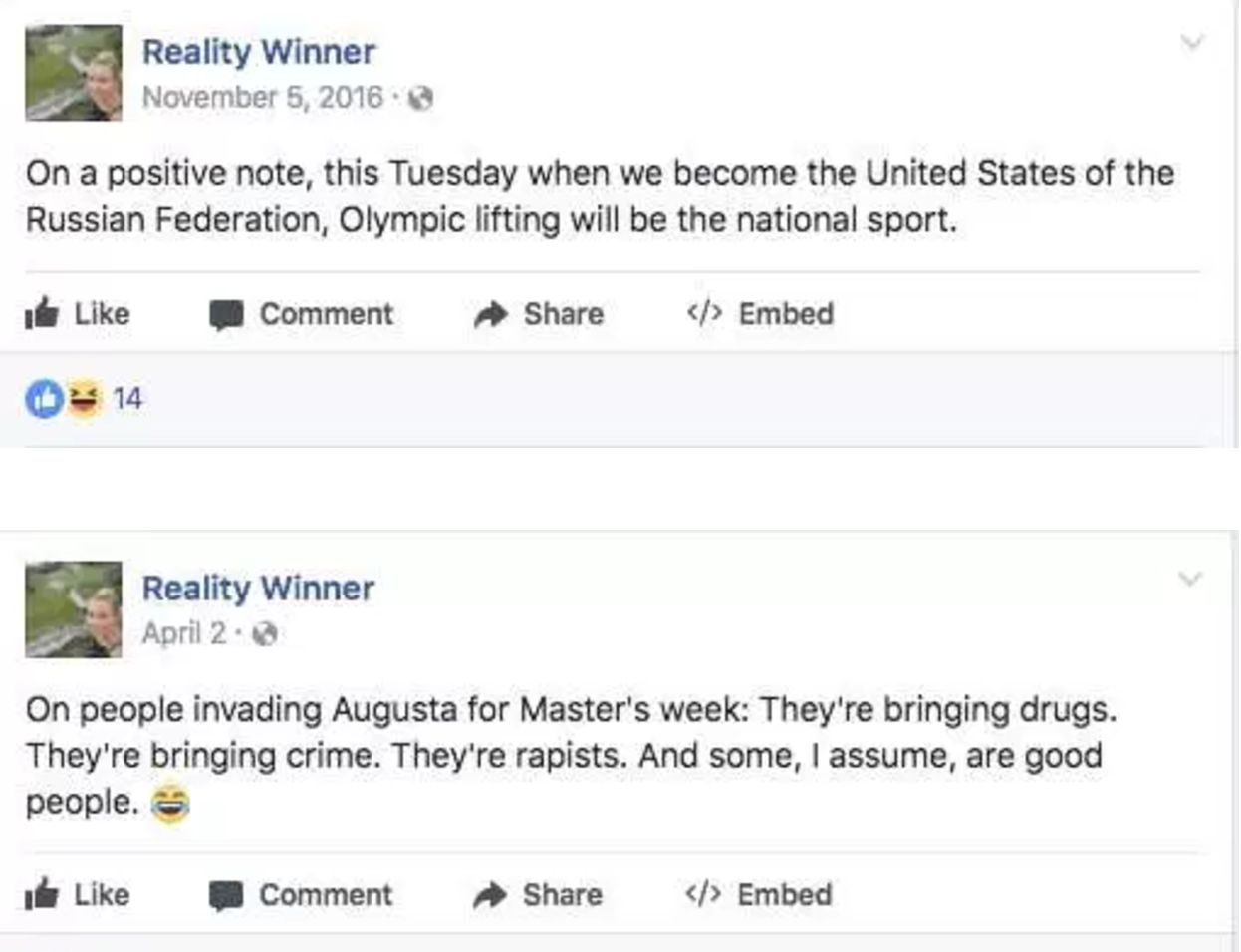 On the bright side, US intelligence officials told CNN that the information in the leaked memo has not changed the January 2017 Intelligence Community Assessment, which found:

“Russian intelligence obtained and maintained access to elements of multiple US state or local electoral boards. DHS assesses that the types of systems Russian actors targeted or compromised were not involved in vote tallying.”
Prosecutors say when confronted with the allegations, Winner admitted to intentionally leaking the classified document — and she was arrested June 3 in Augusta, Georgia.
An internal audit revealed Winner was one of six people who printed the document, but the only one who had email contact with the news outlet, according to the complaint. It further states that the intelligence agency was subsequently contacted by the news outlet on May 30 regarding an upcoming story, saying it was in possession of what appeared to be a classified document.

Deputy AG Rod Rosenstein praised the arrest,  “Exceptional law enforcement efforts allowed us quickly to identify and arrest the defendant,” adding, “Releasing classified material without authorization threatens our nation’s security and undermines public faith in government. People who are trusted with classified information and pledge to protect it must be held accountable when they violate that obligation.”

Hopefully Ms. Winner is the first of many unpatriotic losers arrested for leaking secret information. Winner faces up to 10 years in prison for leaking classified information, here’s hoping she gets the maximum.

Merged by Jeffrey Dunetz on Scribd