Why We Had To Go Through All This 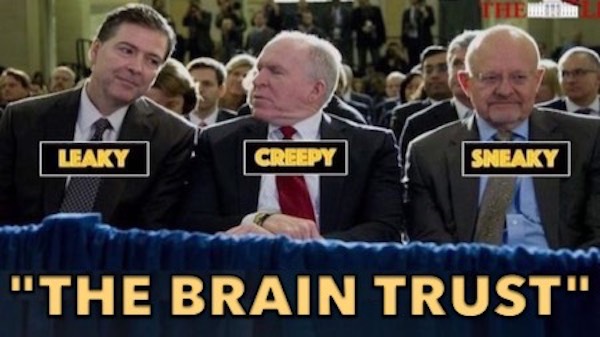 This will be relatively short.  It’s not to pick on anyone in particular that I feature this tweet, because it’s representative of the sentiments of many. fire them

Christopher Wray is either complicit in the cover-up, or he's too incompetent to oversee the clean-up. Either way, he needs to go. There is simply no good reason why it has taken the FBI three years to cough up what we've learned over the past few days. https://t.co/F4Wjdr55YB

I understand.  I don’t just understand; I see, fully and completely, how compelling is the point of view.  Of course, we should have seen Wray removed from his position and replaced long since.

Of course, Robert Mueller and his special counsel team should never have been appointed.  Of course, having been appointed for no good reason, Mueller should have recognized clearly that there was nothing to find, no matter how hard his team dug, and he should have filed a close-out in May 2017.

Of course, every wrong done in the continuation of Spygate since Trump took office should have been averted by firing people.

Of course, none of the people who have pled to or been convicted of process crimes should have ever been under the gun in the first place, starting with General Flynn.

It would have been the right thing, at any point along the way, to just do the right thing at the time.  Take the appropriate step(s) if the misconduct was discovered: discipline and fire the people involved, sever their benefits if possible, cause them to leave government under a cloud.

There was nothing to charge them with back then, for the most part.  Their bad faith and improper operations were becoming apparent, but that doesn’t mean there was evidence they were guilty of provable crimes.  They still should most certainly have been reprimanded, fired, their reputations permanently stained.

But that didn’t happen.  I don’t pretend to know why.  I’ve speculated more than once that some of them have been kept around because that’s how they’re kept under the gun of routine communications monitoring (on their government-provided systems) and dependence on their federal employment.  While they’re federal employees, they may be hard to fire, but they’re easier to keep an eye on and keep incentivized.

But I don’t know for sure, and neither do the rest of us out here in the public.

Here’s what we do know.  If we hadn’t endured the agonizing process we’ve been going through, we wouldn’t know what we know today.  We would be ignorant of all of it.

Without the Mueller special counsel operation, most of it would have been swept under the rug back in 2017.  It’s because the Democrats and the media were allowed to work so hard to take down Trump that we now know so much about what they were doing before 2017, in 2015 and 2016.

If they had backed off that effort, or could somehow have been forced to back off and shut it down in the first half of 2017, even the early discoveries of Devin Nunes would not have been sufficient to raise our awareness of how big this thing is.  The “deep state” elements had to keep prosecuting their effort for the dominoes to start falling as they have.

The reason it mattered for the public to keep demanding more and more answers was that they – the Democrats, the media, their backers – didn’t stop.  And although quite a few have left their jobs or been removed, it kept mattering at each step along the way because there were suspect people still in the positions.

If we were going to come to this day, the day when we can see so much so clearly, it had to be by way of the route we have traveled.

I don’t know – and this final point is by far the most important – I don’t know if we can ever achieve the outcome America needs solely by convicting people of crimes.  There’s been a great deal of abuse of government power that doesn’t fall under any criminal statute.  Although we should pursue them, I don’t think it will be enough to gain convictions through the judicial system.

Ronald Reagan, who was always right about principle, said it 40 years ago: Government is the problem.  It’s what our government has become. That is the problem here.  We have a government now equipped, through statute, regulation, and judicial precedent, with every tool to abuse the people with.

This current anti-Trump thing – Spygate, Russiagate, Obamagate – is so significant and far-reaching because the government is.  Its reach is enormous; the stakes of the power it confers are yet more colossal.  Those complaints laid out against King George in the Declaration of Independence?  We left them in the dust half a century ago.  The government itself is the incentive to abuse us now.  We either rethink what we’re asking the government to do today or that situation will never change.

The crisis laid before us is too big to be resolved by the rote application of existing law (the only thing people can be convicted under).  It is not the courts and the lawyers – it is we, the people who will be the judge and jury of this attack on America.

Perhaps Congress has the means to deal with it by laying bare everything that has been done and making significant modifications to our federal laws.

Perhaps not, or at least not today.  I wouldn’t trust more than about a quarter of our federal lawmakers with such a mighty task.  We’d need to elect many more lawmakers of courage and independence to have the right Congress for the job.

We face a crisis more significant than that of 1861, in my view.  It’s 1787 again. We are confronted with the problem that our federal compact, in the hyper-regulatory direction it has evolved, is inadequate to both guarantee liberty and preserve the union.

We had to be forced to see this because it’s a situation that cannot stand.  I emphatically do not advocate a national “divorce.”  I love every single square inch of this fantastic, unparalleled, gorgeous, incredible land, with her people like no other.  I want to see an America whole and restored, in all her natural, God-endowed diversity.

But that’s not a reason to do too little.  If we walk away from this hour, leaving the great apparatus of government abuse in place, we cannot expect to elect officials who won’t be tempted to use it against us again.  There’s no way to guarantee it.  None.

We are paying the price every day of being forced to see that.  But sight, rather than blindness, is the greatest blessing we could have.  The question now is what we will do.  It is unsettling to not have a ready answer, perhaps – but finding such solutions, without the bloody fangs of a revolution of terror, is what America is for.