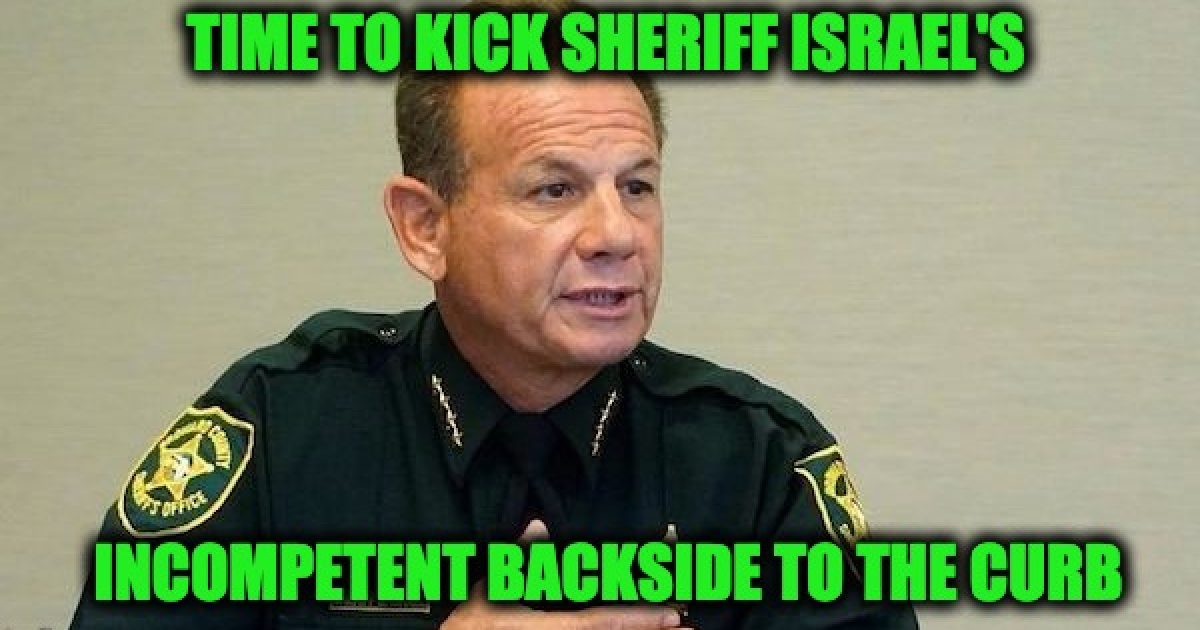 Better late than never. The Broward Sun-Sentinel has pulled an about-face, and after months of backing Broward County Sheriff Scott Israel, the paper now says it agrees with the GOP that the man in charge during the Marjory Stoneman Douglas High School shooting needs to be removed from office.

In an unexpected editorial published the paper insisted that the “failed leadership of Broward Sheriff Scott Israel” is enough to have him removed from office and that the paper’s editorial board now agrees with Gov.-elect Ron DeSantis that Israel must go. The paper notes that it has supported Israel repeatedly in the past. It also pointed out that the unions supported him, but that was “largely because of pay raises.”

It’s a big deal for a governor to remove an elected sheriff, especially if the governor is a Republican and the sheriff is the most powerful Democrat in Florida’s most Democratic county.

We stood up for the sheriff in late February, when Republican lawmakers called for Gov. Rick Scott to suspend him “for incompetence and dereliction.” We did so again in April after the deputies’ union staged a vote of no confidence in him, largely because of pay raises. We’ve suggested all along that people hold their fire until more details are known.

But after seeing the damning details in the commission’s draft report — and Israel’s troubling testimony — we cannot encourage the governor-elect to wait and let voters decide the sheriff’s fate in 2020. We can only encourage DeSantis to replace Israel with a seasoned law enforcement professional with local familiarity, not a Tallahassee partisan who lacks relevant qualifications, as Gov. Rick Scott did in replacing Broward’s incompetent elections supervisor this month.

The paper then adds that the report suggests that the sheriff has not acted in the interests of public safety.

On that issue, the paper says, “Israel has come up short. Worse, the sheriff fails to accept responsibility for things that have gone wrong, instead suggesting that things couldn’t have been better. If he fails to acknowledge that mistakes were made — not only by individuals but by his command — how can we expect a better outcome next time?”

The paper then goes on to lay out the findings in the report showing just how bad Israel has acted especially in his testimony and concludes with:

Like we said, it’s a big deal for a governor to remove a duly elected sheriff, especially one who continues to enjoy a good deal of community support, despite his failures.

But a community of our size is going to face another tragedy. It’s just a matter of where and when. And if we do not learn from history, we are doomed to repeat it.

Given Sheriff Israel’s failure to learn from history — and his failures during our community’s most horrific events — we now stand with those who believe he should be removed and replaced.

It is impossible for Sheriff Scott Israel to learn from history, as demonstrated by his media appearances after the tragedy and his answers to the commission investigating the shooting, it is clear that his ego is so immense he cannot comprehend the fact that he may be wrong,

In any case, it is startling to see the same paper that backed Israel to the hilt suddenly doing an about face and convicting him in its editorial pages. If the liberal newspaper has lost faith in Sheriff Scott Israel, hopefully, it will be an omen of his fate.

To paraphrase what this suite has said before, it’s terrible to be incompetent and it’s awful to be egotistical, but egotistical and incompetent his a fatal combination.

Ron DeSantis is sworn in as the new governor of Florida on January 8th. Hopefully, before the sun sets on the 9th Sheriff Scott Israel will be looking for a new job.

Parts of this post were first seen at GodfatherPolitics