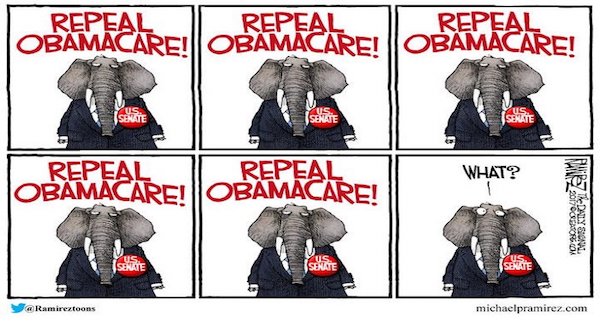 President Trump’s most recent comments on the GOP attempts to fix our nation’s failing healthcare system is music to conservative ears. First repeal and replace later.  If healthcare is done that way, “repeal” would mean get rid of every last sentence, every punctuation, of that freedom-killing Obamacare bill and toss it in the nearest fireplace.

Conservative leaders have for months been arguing that the GOP should simply repeal Obamacare immediately and then write individual bills to deal with the problems that exist in our healthcare industry. Crafting a “comprehensive” healthcare bill that will please all segments of the population is simply impossible and will no doubt end up creating more problems than it solves (just like Obamacare did).
Instead Senators Rand Paul (R-KY), Ben Sasse (R-NE), Mike Lee (R-UT), and a host of conservative Congressmen have been arguing that if we repeal Obamacare and then write smaller bills to deal with specific problems, we’ll be better able to help as many Americans as possible.

In an early morning tweet on Friday, Pres;Trump finally agreed with conservatives and told Congress to immediately repeal and replace at a later date.

Trump’s mind may have been changed by a recent conversation with Senator Paul.

I have spoken to @realDonaldTrump & Senate leadership about this and agree. Let’s keep our word to repeal then work on replacing right away.

On Thursday, Senator Paul told Fox & Friends that he had explained the problem to President Trump and offered a two-part solution whereby Obamacare gets repealed and then GOP moderates and Democrats can add back the provisions they like the most.

“I still sense we’re at impasse, and I said yesterday at lunch with our Republican caucus and everybody kind of laughed because there is still quite a bit of disagreement. There’s basically two factions. There’s conservatives like myself who don’t want new federal programs, we want to repeal Obamacare. And then there’s some of the moderates who kind of want to keep some of Obamacare and they’re not to opposed to new federal government programs.

Many on the conservative side (like me) believed that the promise of repeal and replace meant that congress was going to get rid of the entirety of Barack Obama’s anti-freedom health care program and replace it with what we used to have with accommodations for pre-existing conditions. and people who cant afford insurance. That, and tort reform, and insurance being able to sell over state lines, should drastically bring down insurance costs and allow Americans to purchase the plans to their liking. For example Seniors would be able to purchase plans without provisions for birth control, pro-life Americans would be able to purchase plans without abortion coverage, young people would be able to purchase coverage just for critical injury and/or illness, etc.

Sadly the choice we have been given is repealing some of Obamacare, and replacing it with watered down Obamacare.It’s still better than what we have now—but it certainly doesn’t match the promises we were given. And just as important is the fact that if Obamacare is repealed, I guarantee that even Chuck Schumer and Nancy Pelosi will cooperate on the replace.