Fellow Fraud Fighters, Let’s Take A Breath And Make Sure We Get It Right 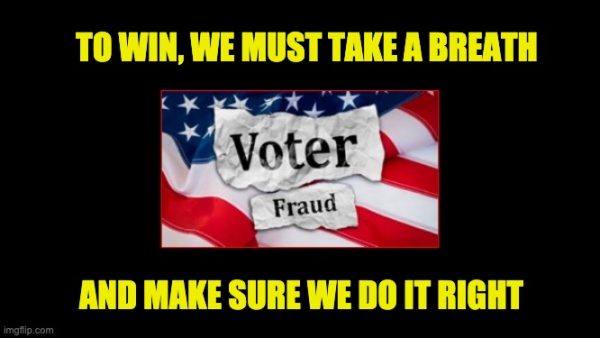 I will admit that all the reports of voter irregularities have made me steaming angry. If they are all true, there is a good chance that President Trump will lead this country for another four years. The final decision may be left to the courts to decide which fraud incidents are substantial enough to change the outcome and/or which votes were cast legally and which ones violate the law. We continue to be fighting voter fraud as hard as we can, not just for this election, but to protect American elections and our government system for the future. In order to win the fight, we must take a quick breath and make sure we are getting it right.

We must fight like heck to make sure voting irregularities are investigated and proven fraudulent, exposed, and fixed. But we need to do it right—expose voter fraud, not rumors of voter fraud. We must investigate what we read because not everything we read is real. We must make sure America knows about incidents of fraud—and present them with evidence. That’s the only way we can convince the doubters.

The Project Veritas USPS revelations resulted in a postal service investigation because they had the whistleblowers on video. Newt Gingrich was given a list of 1,400 dead voters in Michigan. Instead of saying the list was real, he started checking the list to see if the 1,400 people voted and whether or not they were alive. Evidence makes it real.

Many of us call ourselves citizen journalists. We must act that way.   We should seek out voter fraud claims, but instead of accepting them right away—investigate the claim. When the MSM made false claims about Bush #43’s service record just before the 2004 election, a citizen journalist investigated the claim and the evidence. He proved the story was bogus. Bush was reelected, and Dan Rather was out of a job.

Giving examples of voter fraud without proof or only anecdotal proof to others who believe fraud existed is nothing more than “preaching to the choir.” But what we need to do is convince the doubters and build a wave of Americans who want to know the legitimate voting totals.  If we tell them about voter fraud without evidence, they will be turned off instead of convinced. The only way to convince them is to make sure we do it right– provide real convincing evidence when passing along examples of fraud. If the evidence is not forthcoming when you are told about the evidence–it is incumbent on us to find it ourselves.

I used to have a boss who would see us making mistakes because we haven’t thought through a project and say, “sure, there is never time to do it right the first time, but you always find time to do it right the second time.” But folks, when it comes to this election, there is no second time. So each one of us reporting, tweeting, or Facebooking about voter fraud need to take a breath, think about what we are presenting to others, and make sure we get this right–the first time.